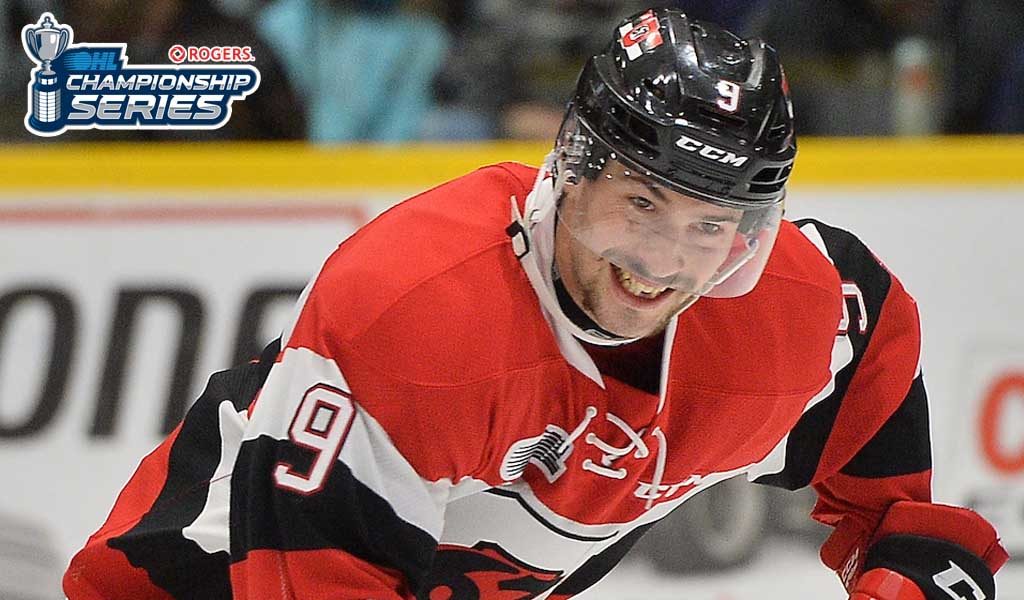 The Ottawa 67’s only play in Guelph once a year, but one man in Barber Poles will be all too familiar with his surroundings on Monday when the puck drops on Game 3 of the Rogers OHL Championship Series.

Guelph native Austen Keating and the 67’s bring a 2-0 series lead to the Royal City as the 20-year-old played his part in Saturday’s 4-3 comeback win in the nation’s capital, scoring a first period goal to turn the momentum in his club’s favour.

Once a star for the Guelph Minor Midget Gryphons, Keating credits the Storm for inspiring him as he rose through the ranks under the influence of names such as Drew Doughty, Peter Holland and Taylor Beck.

“We went to a lot of games,” he recalled. “Mike Cazzola who used to play for Erie and Ottawa is close to our family so we’d often go see him play. I loved watching Drew Doughty so much that I contemplated becoming a defenceman,” he added with a laugh.

“In the 2014 Championship year my mom actually worked in the Storm ticket office so we went to a lot of those games. At that point me and my family were all Storm fans but I think I’ve managed to convince them to cheer for Ottawa.”

“I grew up playing with the ’98 age group and I think playing a year up really helped with my development,” said Keating. “It’s obviously not something everyone does, but in my case I think it pushed me to be better. My coaches Matt May and Ryan Black (PBO/LDN, 1990-94) did a terrific job helping my progression. It was nice to be able to play in my hometown with the friends I grew up with.”

These two are heating up 🔥

Ottawa’s first round (16th overall) pick in the 2015 OHL Priority Selection, Keating is one of 18 players drafted and developed by the 67’s through the priority selection.

While Tye Felhaber took centre stage with 109 points in Ottawa this past season, Keating was a big contributor to that success with 89 points of his own. His 67 assists were the fourth-highest in the OHL this season and the most by a 67’s player since Corey Locke who had the same number back in 2003-04.

Despite that success, Keating remains without an NHL contract.

“At the start of the year me and my agent talked about it and I told him that I didn’t want to hear if teams were interested. I just wanted to focus on my year and I think it’s helped me a lot.”

“I’m proud of the year I’ve had. Playing with guys like Felhaber, Rossi, Chmelevski and Graeme Clarke makes my job a lot easier, but I think we’ve all made some impressive gains.”

Sporting the OHL’s best-ever playoff record of 14-0, the 67’s are two wins away from their first OHL Championship since 2001. They’ll have to get past Keating’s childhood heroes the Guelph Storm first though, a club that has twice overcome 2-0 series deficits in the 2019 OHL Playoffs.

See all of tonight’s action live on Cable 20 in Guelph, Cable 22 in Ottawa, on Rogers Sportspak Channel 454 or streaming online at OHLLIVE.com.