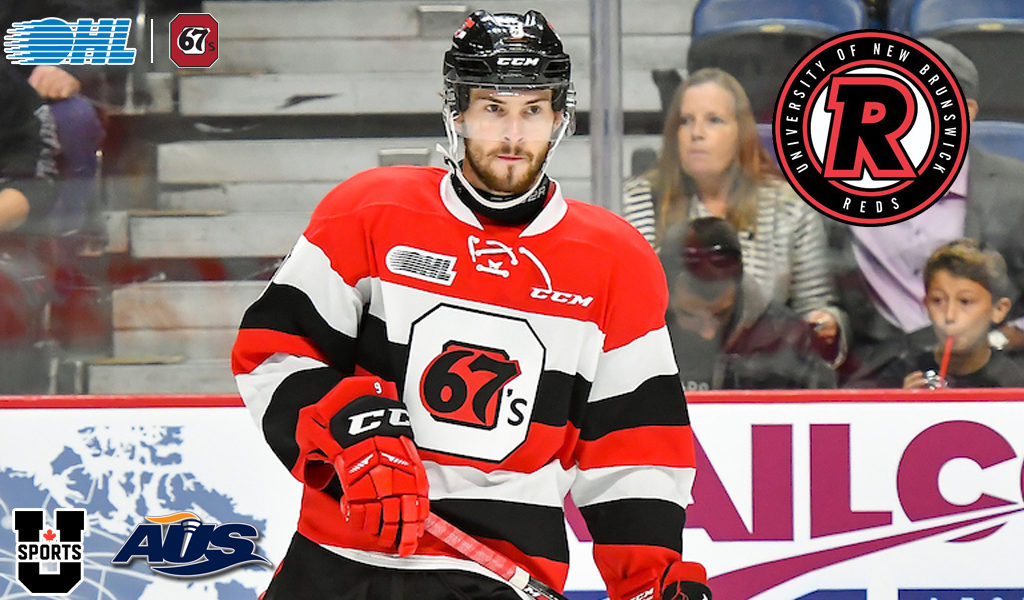 Keating, from Guelph, Ontario, recently completed a five-year career with Ottawa, of the Ontario Hockey League, and is coming off back-to-back 89-point seasons with the 67s.

“Austen is an impact player, and has been throughout his OHL career,” said Reds head coach Gardiner MacDougall. “He’ll be a top performer for our team right away, bringing a great two-way game, tremendous offensive instincts, and excellent hockey savvy at both ends of the rink.”

During his five OHL seasons, Keating played 309 regular season games, amassing 325 points. In the pandemic-shortened 2019-20 season, he was on pace for career-best numbers, having already scored a career-high 32 goals and adding 57 assists.

“UNB’s program is one of the top development programs in Canada, and the success that the team has had over the years is incredible,” said Keating. “Players that go to UNB always become better players than before they arrived.”

“Fredericton is a beautiful place, and somewhere that I wanted to go,” he said.

The centre was selected to the 2018-19 OHL All-Star team that took part in the Junior Super Series against Team Russia.

“I did have other school options, but UNB was the best option,” said Keating. “Surrounding myself with great players will help me to get better each day. The program is known as one of the hardest working and talented teams in the country, and putting myself in that situation is where I want to be.”

“We think Austen is a team-first player who is excited about the opportunity here at UNB to win and develop,” said MacDougall. “He’s been a great player on a top-notch team in Ottawa, and he’s looking to continue to grow his game here at UNB.”

Excited to have Keating’s commitment, MacDougall says the situation reminds him of a previous recruiting effort.

“The last 89-point player we recruited from the OHL was Hunter Tremblay,” said MacDougall.

And the parallels don’t stop there.

Tremblay, who played four seasons as a Red, went on to become UNB’s all-time leading scorer.

“I think I’m good at being able to read plays and think-the-game, in order to put myself and my teammates in situations to be successful on the ice,” he said. “Having the leaderships qualities that I gained in Ottawa allows me to be a strong leader, on and off the ice.”

He says, along with earning a degree, he’d like to help the Reds win at least one more national championship.

Keating has yet to decide what he’ll study while attending UNB, but has narrowed his choices to Business Administration and Recreation and Sport Studies.