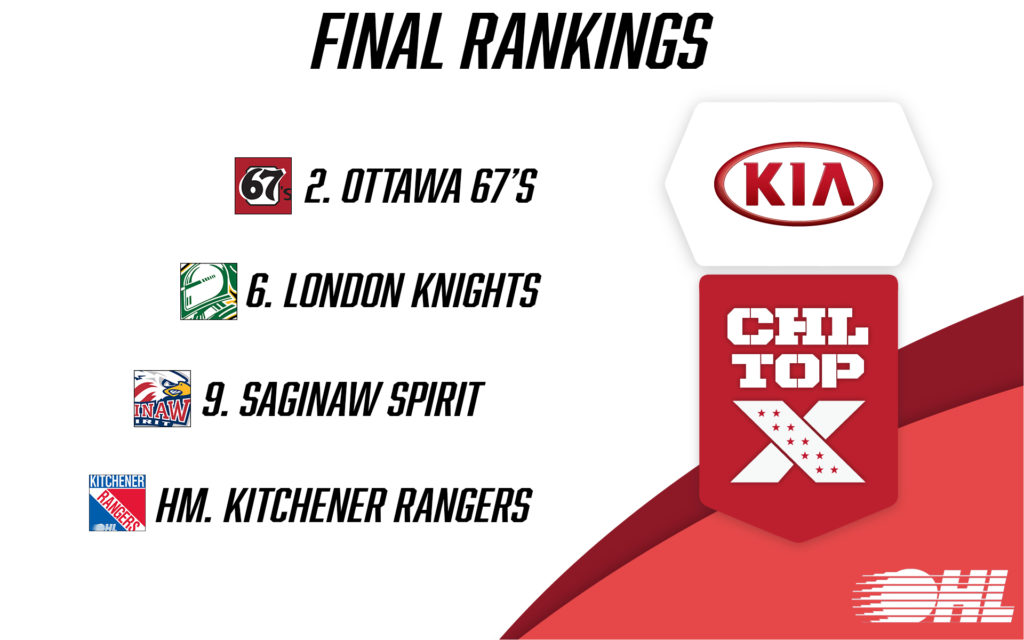 Toronto, ON – The Canadian Hockey League today announced the final edition of the Kia CHL Top-10 Rankings for the 2019-20 season. The final rankings come following the league’s difficult decision to cancel all remaining regular season games as a result of the COVID-19 pandemic. The weekly rankings of the CHL’s Top-10 teams are selected by a panel of National Hockey League scouts.

The 67’s finished the season as Hamilton Spectator Trophy recipients for a second straight year, reigning supreme as regular season champions with a 50-11-0-1 record, good for 101 points. Ottawa boasted the League’s leading scorer in 2020 NHL Draft prospect Marco Rossi who became the seventh player in franchise history to claim the Eddie Powers Memorial Trophy, doing so with 120 points.  The 67’s also surrendered the OHL’s fewest goals against, allowing 164 over 62 games as goaltenders Cedrick Andree and Will Cranley earned the Dave Pinkney Trophy for their efforts.

The London Knights round out the season on a seven-game winning streak, holding down the sixth spot on the weekly rankings. London finished atop the Western Conference standings with a 45-15-1-1 record, piling up 92 points as Midwest Division champions. The Knights were backstopped by 17-year-old rookie Brett Brochu whose 2.40 goals-against average was the lowest in the OHL this season. The Knights were led in scoring by Washington Capitals first round pick Connor McMichael with 102 points (47-55–102).

The Saginaw Spirit end the campaign as the ninth-ranked team in the CHL, finalizing their second straight West Division title. The Spirit won seven straight to end the season, finishing with a 41-16-3-2 record as 2020 NHL Draft prospect Cole Perfetti led the team offensively with 111 points (37-74–111). Minnesota Wild prospect and captain Damien Giroux led the Spirit in goals, lighting the lamp 44 times.

The Kitchener Rangers receive an honourable mention to end the season. Kitchener finished five points back of London for second in the Midwest, boasting an overall record of 40-16-5-2. Los Angeles Kings prospect Jacob Ingham was steady in goal, leading the League with 33 wins and a 2.96 goals-against average. The Rangers were led in scoring by Dallas Stars prospect Riley Damiani who put up 78 points (28-50–78) over 61 games. 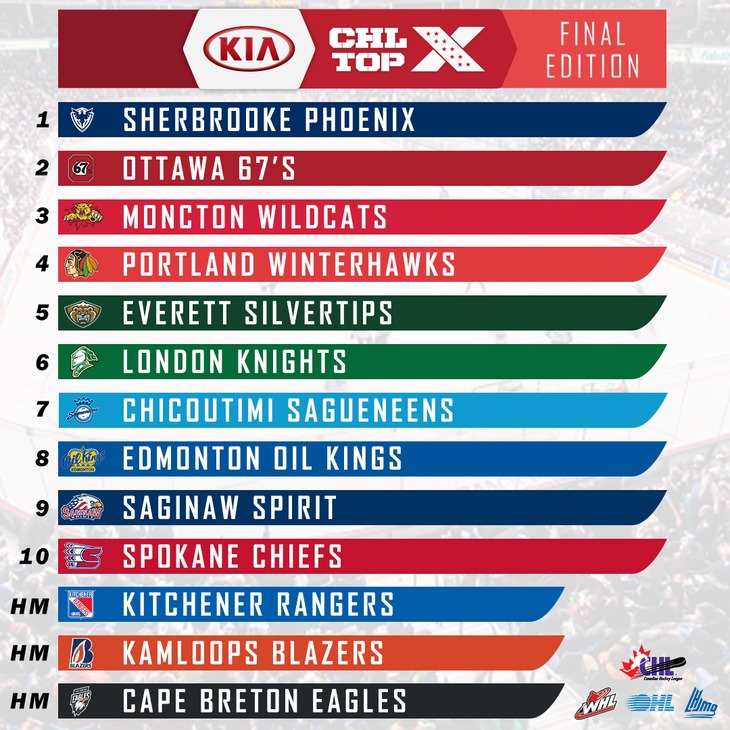