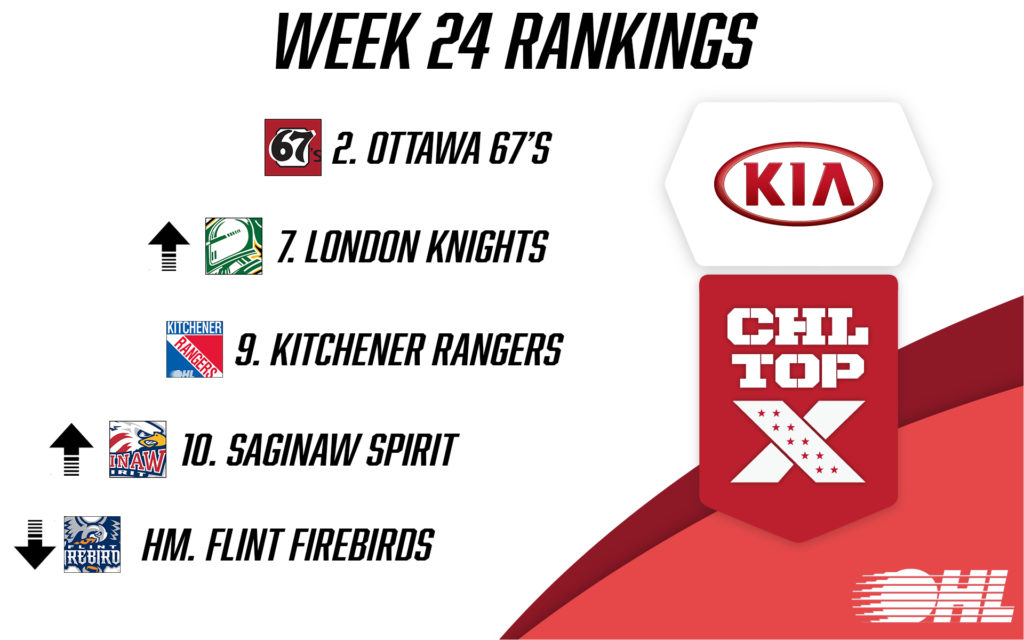 Toronto, ON – The Canadian Hockey League today announced the week 24 edition of the Kia CHL Top-10 Rankings for the 2019-20 season.  The weekly rankings of the CHL’s Top-10 teams are selected by a panel of National Hockey League scouts.

The Ottawa 67’s remain the second-ranked team in the CHL following a perfect 4-0 week with wins over Kingston, Oshawa, Barrie and Oshawa once again. Top 2020 NHL Draft prospect Marco Rossi leads the CHL in scoring with 110 points (36-74–110), headlining a 67’s lineup that includes five different 30-goal scorers. Fellow draft eligible forward Jack Quinn is now within two goals of 50 on the campaign.

The London Knights continue to climb. Head coach Dale Hunter’s club is on a four-game winning streak, leading the Western Conference with a 42-15-1-1 record. Rookie goaltender Brett Brochu set a new franchise record for wins by a rookie with his 29th of the season this past weekend. He owns a 30-6-0-0 record with a 2.48 goals-against average and .917 save percentage over 40 games. San Jose Sharks first round pick Ryan Merkley has been red hot on the back end, pulling into a tie for the League scoring lead among blueliners with 75 points (15-60–75) over 57 contests. London’s latest triumph came in a 6-2 win over the Midwest Division’s second place Kitchener Rangers on Tuesday, increasing London’s cushion to three points.

The aforementioned Rangers held steady in the ninth spot this week, defeating Sarnia and Owen Sound before losing to the Knights on Tuesday. Florida Panthers prospect Serron Noel has come alive offensively of late for the Rangers, putting up 12 points (3-9–12) over his last seven games. Los Angeles Kings draftee Jacob Ingham has been among the League’s top netminders this season with a 2.96 goals-against average, .918 save percentage and 31-8-4-1 record over 44 games.

The Saginaw Spirit return to the Top-10, bumping out the division rival Flint Firebirds for the 10th spot. The Spirit scored back-to-back victories over Eastern Conference opponents at home last weekend, defeating Kingston and Hamilton handily to improve to 38-16-3-2, one point up on the Firebirds for the West Division lead. Spirit forward Cole Perfetti joins Rossi as one of two OHLers with 100 points on the season. Captain and Minnesota Wild prospect Damien Giroux leads Saginaw with 41 goals.

The Flint Firebirds receive an honourable mention this week, defeating Sarnia and Hamilton before falling 6-1 to Shane Wright and the Kingston Frontenacs on Saturday. Flint is now 39-19-1-1 on the campaign, their best season in the five-year history of the squad. 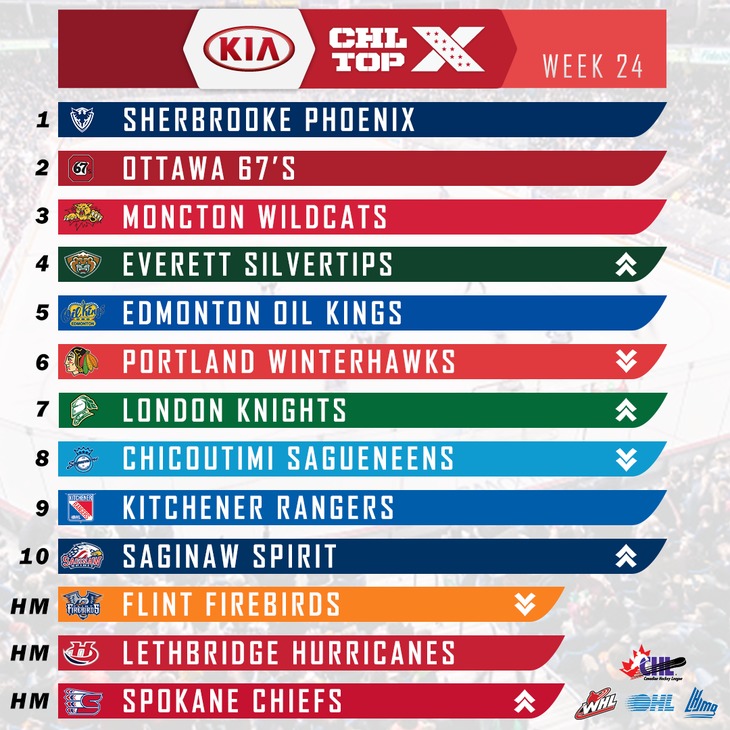