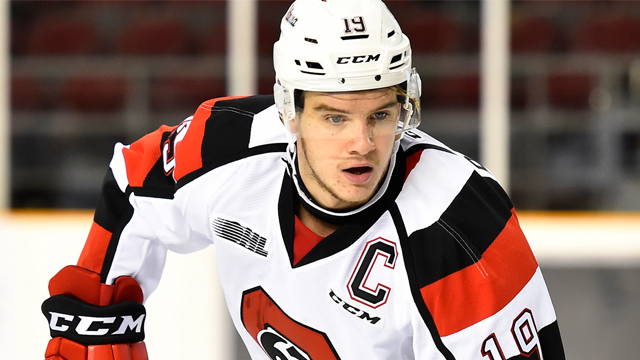 OTTAWA, ON – Ottawa 67’s head coach and GM Jeff Brown today announced his captain and alternates ahead of a pair of home games at The Arena at TD Place this weekend. When Ottawa takes to the ice Saturday afternoon against North Bay, they will be led by new captain Travis Barron, with a pair of local players as alternates – Ryan Orban and Patrick White.

“These are three exceptional players on and off the ice,” said Brown. “We have the youngest team in the league and Travis, Ryan and Patrick will play a vital role in not only leading this group but helping with the development and maturity of these young players.”

“We have several great leaders in this hockey club and while some may not wear a letter, they remain an integral part of our leadership group,” Brown added.

Barron was the 67’s first round draft selection (third overall) in 2014 and was the Colorado Avalanche’s seventh round selection at the 2016 NHL Entry Draft.

“To be named the captain of the Ottawa 67’s is a dream come true,” said Barron. “I’ve always prided myself in being a leader. It’s an unbelievable feeling and I’m very proud that the coaching staff trusts me to lead this team.”

Ryan Orban is in the midst of his third season with the Barber Poles and fourth overall in the OHL. A second round pick of Saginaw’s in 2013, the Stittsville native returned home during the 2014-15 season and carries over 150 games of OHL experience.

“It’s a huge honour and I’m looking forward to the opportunity,” said Orban. “I watched the 67’s growing up and thought it would be amazing to play for them and to now have the opportunity to wear a letter just makes this all the more special.”

After three seasons in Sarnia, Patrick White was brought home by the 67’s via trade this past off-season. Now the Orleans native will bring ample experience to the 67’s young roster.