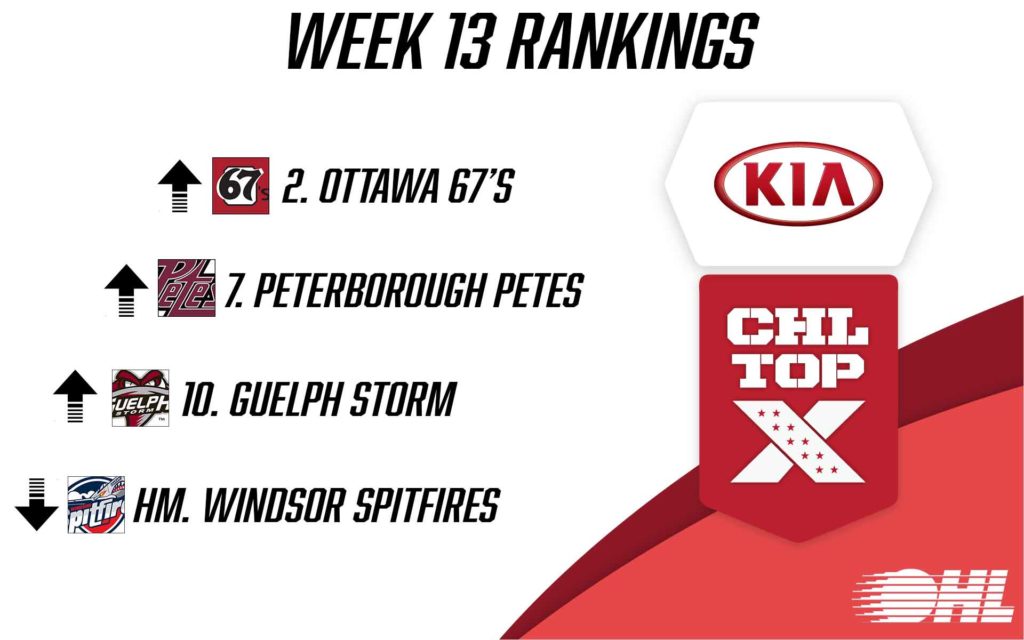 Toronto, ON – The Canadian Hockey League today announced the week 13 edition of the Kia CHL Top-10 Rankings for the 2019-20 season.  The weekly rankings of the CHL’s Top-10 teams are selected by a panel of National Hockey League scouts.

The Ottawa 67’s are up into the second spot on the Week 13 edition of the rankings, riding a nine-game winning streak into a Saturday matchup against the Barrie Colts. The defending Eastern Conference champions have been powered by the consistent presence of 2020 NHL Draft prospect Marco Rossi who is on an 11-game point streak that has netted 27 points (12-15–27). Netminder Cedrick Andree has been among the OHL’s best this season, coming off a pair of weekend victories to improve to 15-5-0-0 with a 2.41 goals-against average and .917 save percentage. The Barber Poles will be without head coach Andre Tourigny in the coming weeks as he heads to the 2020 IIHF World Junior Hockey Championship as part of Canada’s coaching staff.

Another East Division squad in the Peterborough Petes are up to seven in this week’s rankings. The men in maroon are tied with Ottawa atop the OHL standings, playing to a 21-7-1-1 mark despite playing their first nine consecutive games of the season on the road. Toronto Maple Leafs prospect Semyon Der-Arguchintsev sits tied for the OHL lead in assists with 36, posting a club-leading 40 points on the campaign while fellow Leafs pick Nick Robertson leads the Petes with 21 goals. Liam Kirk, Zach Gallant and rookie standout Mason McTavish have each scored 15 goals this season. The Petes prepare for a weekend three-in-three with matchups against Hamilton, Oshawa and Niagara.

The Guelph Storm are back into the Top 10, rising to 10th on the list following a Tuesday night triumph over the Owen Sound Attack. The defending OHL champions have benefitted from the fine goaltending of Canadian World Junior hopeful Nico Daws who leads the league with a 2.06 goals-against average, .939 save percentage and four shutouts. Russian-born winger Pavel Gogolev has surged to the top of the team’s scoring list, lighting the lamp 20 times while adding 26 assists for 46 points. Guelph squares off with Windsor, Kitchener and Oshawa in a three-in-three this weekend.

The Windsor Spitfires fell out of the Top 10 and into the honourable ranking section, falling 4-3 to the Kitchener Rangers on Thursday before coming back strong in a 3-0 blanking of the Saginaw Spirit on Saturday. The Spits sit second in the West Division with a 16-6-3-0 record. They hold four games in hand on first place Flint. 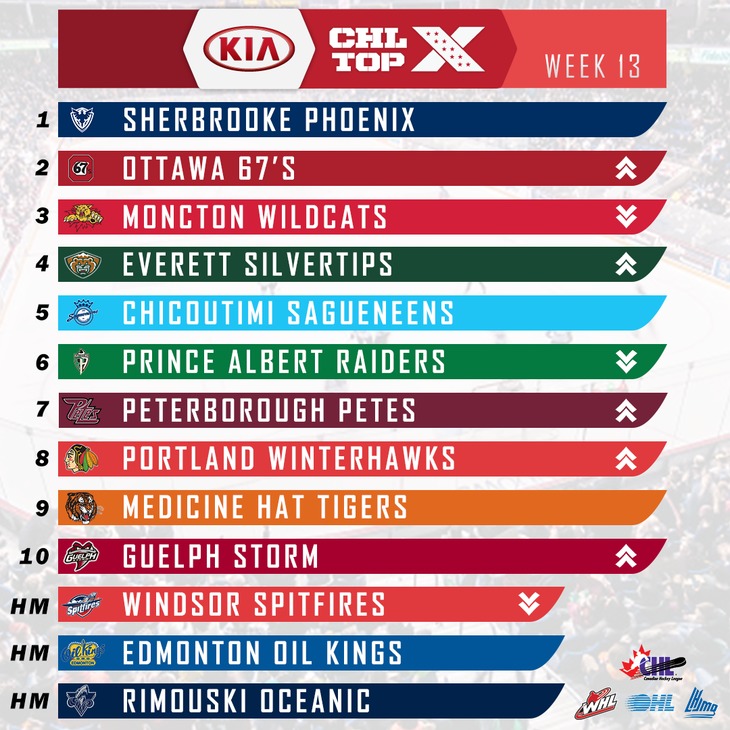