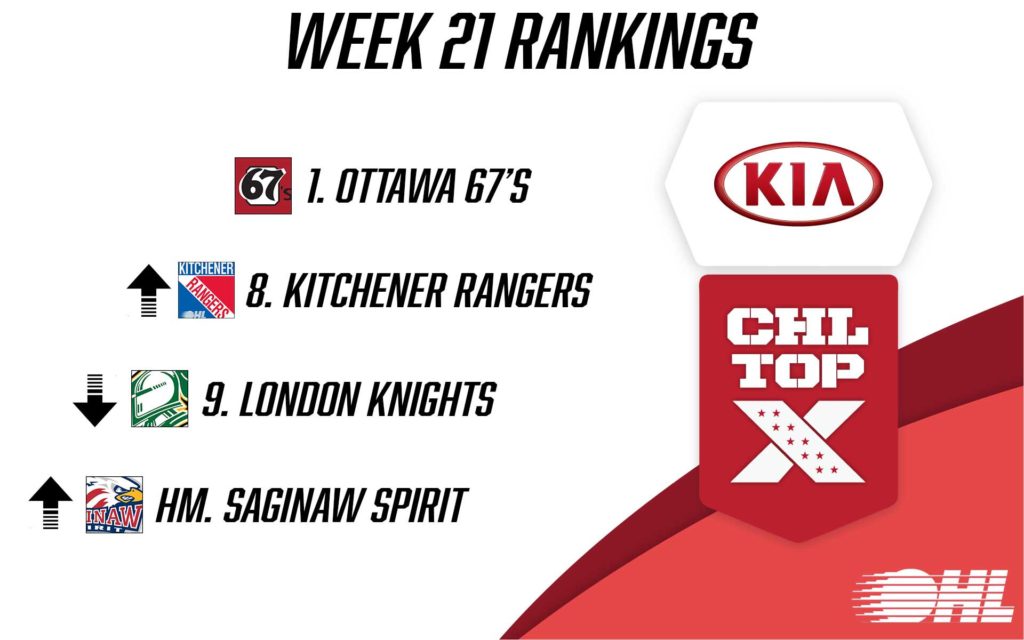 Toronto, ON – The Canadian Hockey League today announced the week 21 edition of the Kia CHL Top-10 Rankings for the 2019-20 season.  The weekly rankings of the CHL’s Top-10 teams are selected by a panel of National Hockey League scouts.

The Ottawa 67’s hold down top spot for the sixth week in a review despite a blip against the Peterborough Petes last weekend that saw a 10-game winning streak snapped. The 67’s rebounded in a big way on Sunday, smashing the North Bay Battalion 9-1 on home ice as Marco Rossi cushioned his OHL scoring lead. Ottawa hits the road for Mississauga on Friday before returning home to take on Windsor and London on Sunday and Monday.

The Kitchener Rangers climbed back into the Top 10, being ranked for the third time this season as they hold down the eighth spot. The Rangers are riding a four-game winning streak with recent wins over Sault Ste. Marie, Mississauga, Sarnia and Erie. Rookie forward Declan McDonnell comes off a big week that saw him register his first career OHL hat-trick and score a total of six times. Backup netminder Lucas Pfeil posted a 28-save shutout in Sarnia on Sunday while Los Angeles Kings prospect Jacob Ingham continues to be one of the most dependable netminders in the league. Kitchener prepares to face a pair of tough opponents in London and Saginaw on the road before heading to Hamilton for a Family Day clash with the Bulldogs.

The London Knights hang around in the Top-10 despite seeing their 10-game winning streak snapped by the Guelph Storm on Tuesday. The ninth-ranked Knights recently saw co-captain Liam Foudy make his NHL debut with the Columbus Blue Jackets. The Knights are set to face the eighth-ranked Rangers as they renew their Midwest Division rivalry on Friday in London.

The Saginaw Spirit receive an honourable mention for their recent efforts. Saginaw entered Wednesday’s action leading the West Division with a record of 32-15-2-2 with 70 points. Saginaw gets a big boost on the blue line with the return of New York Islanders prospect Bode Wilde this week. 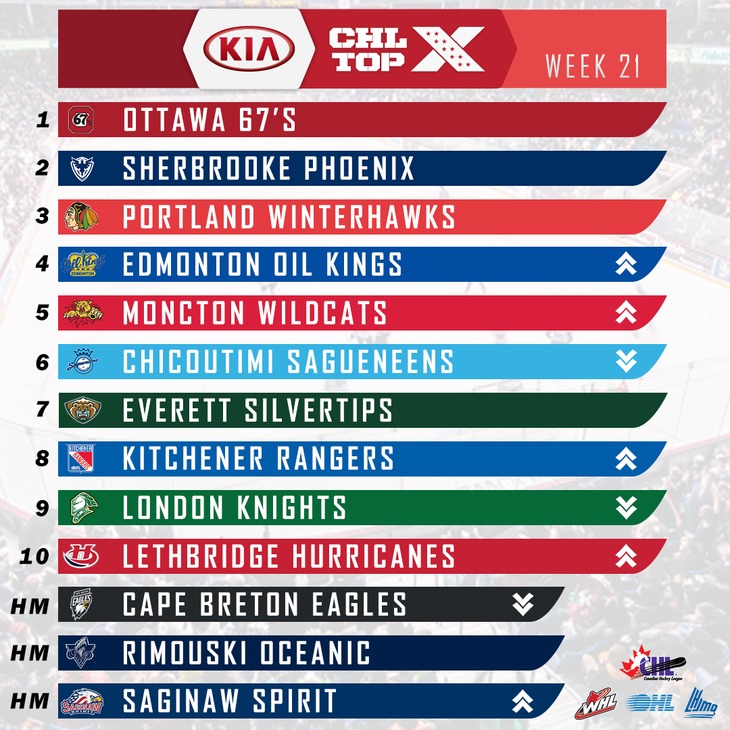