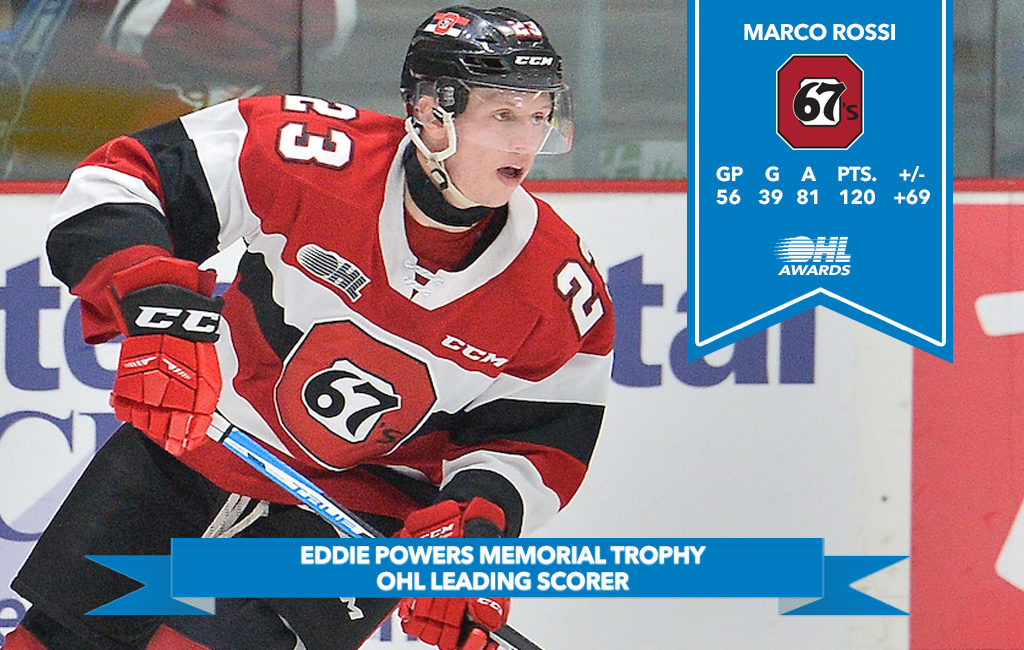 Marco Rossi finished atop the regular season scoring charts earning the Eddie Powers Memorial Trophy with a CHL-leading 120 points including 39 goals, 81 assists and an impressive plus/minus rating of plus-69 over just 53 games. His 2.14 point-per-game pace led the OHL and is the highest such figure by an OHL scoring champion since London’s Patrick Kane (2.50) in 2006-07. He becomes the first Eddie Powers Memorial Trophy recipient of European descent since Stan Mikita of the St. Catharines Teepees claimed the honour in 1958-59.

The 18-year-old from Feldkirch, Austria helped power the first place 67’s with the League’s top power play, rounding out the campaign with a total of 34 multi-point performances, 23 of which included three points or more. His top performances included a five assist showing on October 20th against Hamilton, another five point outing on November 17th in Sarnia and a career-high six point output on November 27th in Kingston. The 5-foot-9, 187Ib. centreman finished the season with an impressive 58.5% success rate in the faceoff circle.

The fifth-ranked North American skater on NHL Central Scouting’s Midterm Draft Rankings competed in the 2020 Kubota CHL/NHL Top Prospects Game this past January in Hamilton. Rossi, who was named to the OHL’s second all-rookie team in 2018-19, has accumulated 185 points (68-117–185) over just 109 regular season games since being selected by the 67’s with the 18th overall pick of the 2018 CHL Import Draft.

The Eddie Powers Memorial Trophy was donated by the Toronto Marlboro Athletic Club in memory of Eddie Powers and was first awarded in 1945-46 to Tod Sloan of St. Michael’s who scored 79 points in 25 games.  Jason Robertson of the Niagara IceDogs was last year’s recipient with 117 points in 62 games including 48 goals and 69 assists.  Other recent winners include Barrie’s Aaron Luchuk (2018), Erie’s Alex DeBrincat (2017) and Barrie’s Kevin Labanc (2016).