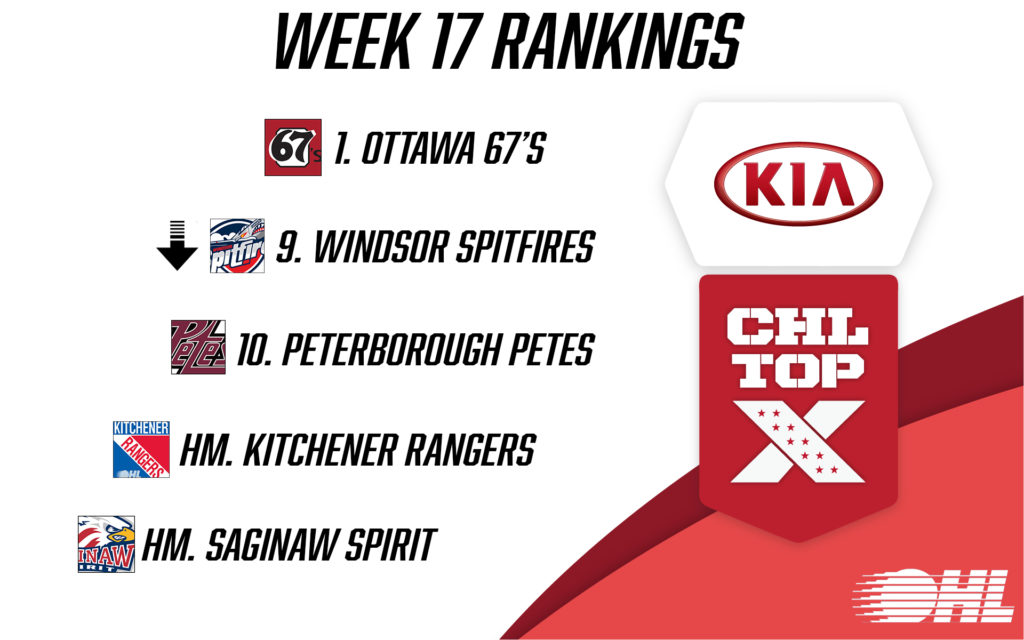 Toronto, ON – The Canadian Hockey League today announced the week 17 edition of the Kia CHL Top-10 Rankings for the 2019-20 season.  The weekly rankings of the CHL’s Top-10 teams are selected by a panel of National Hockey League scouts.

The Ottawa 67’s remain the top-ranked team in the Canadian Hockey League following a three-in-three weekend that saw them collect four of a possible six points. Ottawa saw its franchise record 17-game winning streak snapped on Saturday in Peterborough before rebounding with a 7-4 win over visiting Owen Sound on Sunday. The Barber Poles remain the first place team in the OHL with a 31-7-0-0 record, leading all clubs with 183 goals for along with a league-low 105 goals against. Marco Rossi, who will play in this week’s Kubota CHL/NHL Top Prospects Game, leads the OHL with 74 points (26-48–74) over 32 games.

The Windsor Spitfires fall one spot from eighth to ninth on the list after dropping consecutive decisions against Oshawa and Flint before bouncing back with a 5-4 overtime win in Kitchener on Sunday. Windsor boasts 10 different players with double-digit goal-scoring totals led by Columbus Blue Jackets prospect Tyler Angle who has lit the lamp 21 times. The Spits are on home ice on back-to-back days this coming weekend, playing host to American opponents in Erie and Saginaw. Windsor leads the Western Conference with a 25-9-5-0 record.

The Peterborough Petes round out the Top 10 following an up-and-down weekend that began with a 5-2 loss to visiting Owen Sound on Thursday, a big 4-0 shutout of the red hot Ottawa 67’s on Saturday and a 6-4 road loss to the Oshawa Generals on Sunday. The 26-13-2-1 Petes sit seven points back of first place Ottawa in the East Division, but got the better of the Barber Poles this past weekend, ending their 17-game winning streak. Akil Thomas debuted with his new club this past weekend, putting up five points (1-4–5) over two contests.

The Kitchener Rangers and Saginaw Spirit both remained honourable mentions for the second straight week. 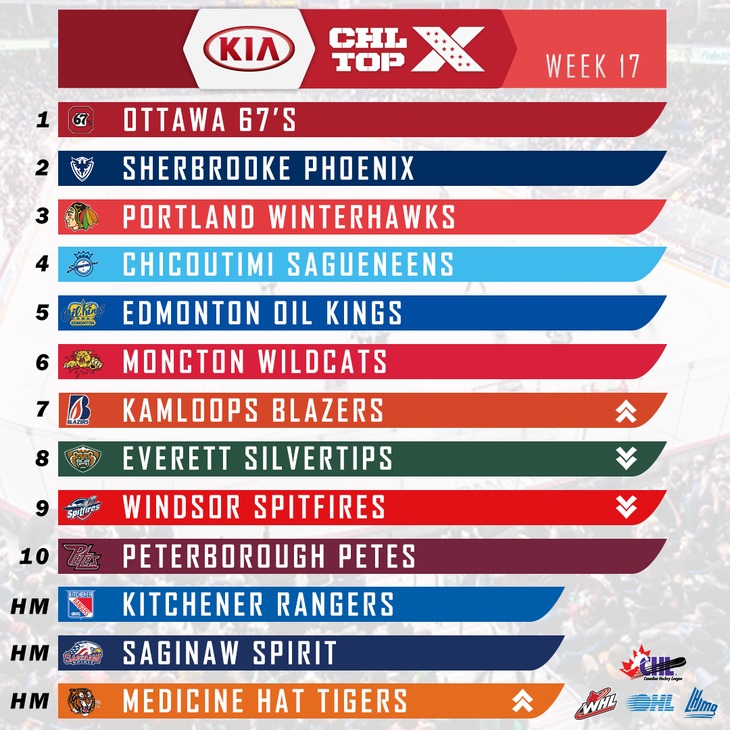