67’s staff grows with key additions of Duhamel and Egert 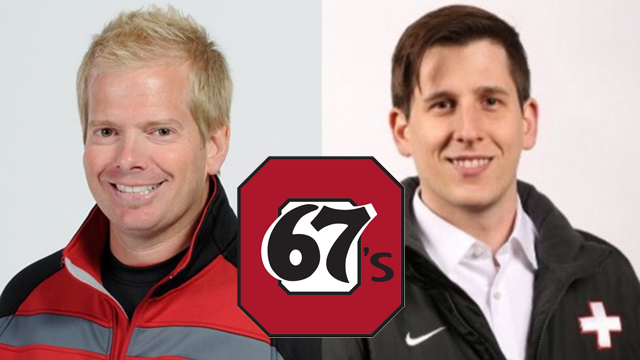 OTTAWA – Following a busy month of June that launched a new era in the 67’s front office with the hiring of James Boyd as General Manager and André Tourigny as head coach and VP of Hockey Operations, the hockey club announced Tuesday two more appointments. Mario Duhamel joins the 67’s as Associate Coach, while Jan Egert has been appointed Assistant General Manager as the 67’s score experienced personnel.

Duhamel brings a wealth of junior hockey coaching experience with him, not to mention the familiarity of working alongside Tourigny. Most recently, Duhamel was the head coach of the Gatineau Olympiques (2016/17), but got his start in the QMJHL in 2005 as an assistant coach at Rouyn-Noranda where Tourigny was the General Manager. The pair spent four seasons working together with the Huskies, another two in the NHL when Duhamel was the Avalanche’s Video Coach and they have also worked together with the Team Canada U20 team.

“We are really fortunate to add a quality coach and person like Mario,” said head coach and VP, Hockey Operations André Tourigny. “Mario has experience at the NHL level, with Team Canada at the U18 level and at the World Junior level and has been a head coach in the ‘Q’ for a long time. That is a ton of experience and expertise we add to our coaching staff. In order to offer a premium environment to our players, the quality of our staff is a priority.”

After four years as an assistant with the Huskies, Duhamel netted his first head coaching job in the ‘Q’ with the Drummondville Voltigeurs where he spent four seasons before making the jump to the NHL. Duhamel returned to junior hockey with a familiar hockey club – the Rouyn-Noranda Huskies – where he became their Assistant GM for the 2015/16 season where the Huskies won the President’s Cup en route to the Memorial Cup where they reached the championship final.

“I’m very excited and honoured to join the 67’s Hockey Club. My family and I couldn’t ask for a better fit to start a new chapter of our journey,” said Duhamel. “I’m thrilled at the idea of working with such a strong and experienced group of hockey guys sharing knowledge for the benefit of our players.”

Equally as impressive in the 67’s experience in the front office that also grew on Tuesday. Jan Egert is no stranger to junior hockey and is no stranger to working with James Boyd. The Swiss native has built his junior hockey resume while working under Boyd with the Mississauga Steelheads. Egert joined the Steelheads (then St. Michael’s Majors) as a Video Coach and Scouting Coordinator in the 2011/12 season. After four seasons in that role, Egert was promoted to Assistant General Manager ahead of the 2015/16 season and this past year had Head Scout added to the job title as well in a year that season the Steelheads reach the OHL Championship Finals.

“Jan is an excellent talent evaluator and progressive manager who is up to date on cutting edge techniques that will improve our hockey club,” said GM James Boyd. “Jan will be integrated into all facets of our team in order to create the best environment for our players.”

In addition to his experience in the OHL, Egert has also served his native Switzerland as their Video Coach at each of the last three IIHF World Junior Hockey Championships. Egert also spent two years working for the NHL as their Coordinator for Central Scouting.

“I’m thrilled to have the opportunity to join the Ottawa 67’s Hockey Club for it’s 50th anniversary season and beyond,” said Egert. “I look forward to working alongside James, Andre, Mike, Mario, all the players and prospects, and the rest of the OSEG organization as we work towards bringing an OHL Championship and Memorial Cup back to Ottawa.”