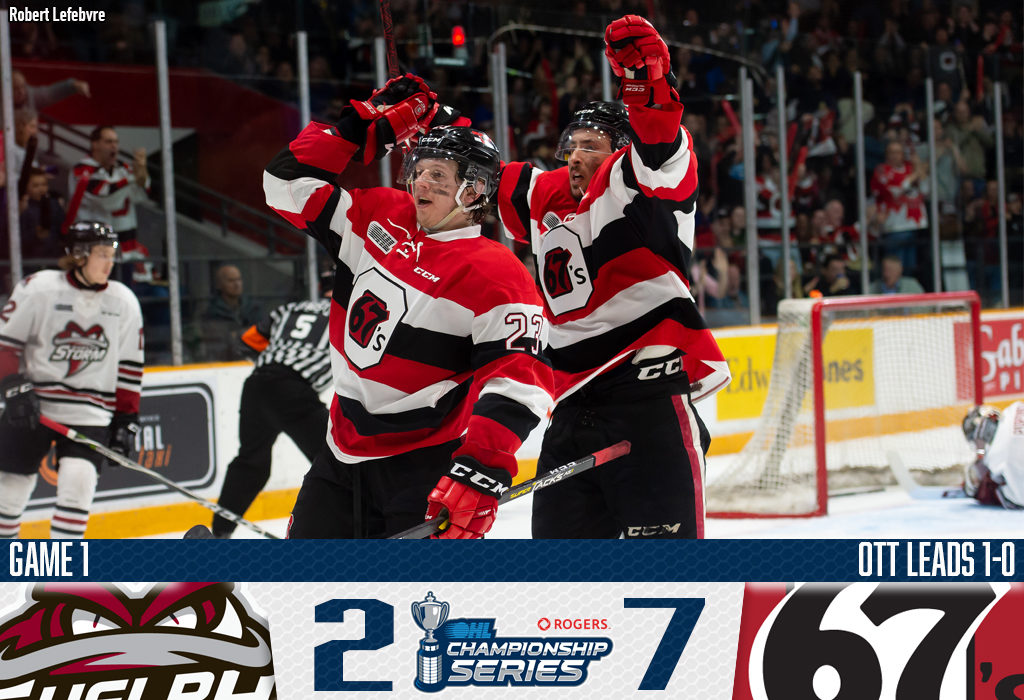 Ottawa, ON – Despite a quick turnaround following Game 7 heroics in Saginaw on Monday the Guelph Storm brought a physical edge and sent 39 shots the way of Michael DiPietro, but it was the Ottawa 67’s who were doing all of the executing in Game 1 of the Rogers OHL Championship Series.

Seven different players had multi-point performances as the Barber Poles tied an OHL playoff record with their 13th consecutive win, going 4-for-5 on the power play in a 7-2 victory.

“I thought we did a great job responding to adversity tonight. You’re not always going to get the calls in the playoffs,” said first star Sasha Chmelevski after the chippy, hard-hitting affair. “Our team did a great job, there’s a lot of no quit in that room.”

A week-long layoff didn’t slow the 67’s early as Lucas Chiodo had a goal disallowed following review inside the opening minute of action. Chmelevski (7, 8) made his shot count moments later though as he snapped a release inside the far post from down the wing 3:46 into the first frame.

“I think it was great because even after Chiodo doesn’t score there everybody picks him up and we go from there,” Chmelevski said. “We killed off a couple five-on-threes tonight too and it just shows the grit and the character we have in our room.”

Dallas Stars prospect Tye Felhaber (12, 13) extended his point streak to 10 games before the first expired, wristing a shot over the shoulder of Anthony Popovich from the top of the circle to give Ottawa a 2-0 lead into the first intermission.

Chiodo (8) extended his point streak to 13 games and kept Ottawa’s momentum going 54 seconds into the second, cashing in from the slot on Mitchell Hoelscher’s centering feed from below the goal line.

As they have throughout these playoffs, the Storm didn’t go down without some push-back as Isaac Ratcliffe (10) and Nick Suzuki (14) both scored to cut the Ottawa lead to one by the midway point of regulation. Guelph outshot Ottawa 19-11 in the middle stanza.

Coming off back-to-back penalty kills, the 67’s got the momentum-shifter they were looking for when Marco Rossi (6), back into the lineup after missing Game 4 of the Eastern Conference Championship Series, crashed the net to push a puck over the goal line and put Ottawa ahead 4-2 after two.

The wheels fell off for the Storm in the third period as a five-minute boarding penalty put them in a hole they wouldn’t be able to dig out of. The 67’s buried three goals in under two minutes as Chmelevski, Felhaber and Noel Hoefenmayer (7) put things out of reach.

“Very poor execution from us tonight, trying to complicate things I think,” said Storm head coach George Burnett. “We didn’t have great traffic. We lost a lot of faceoffs tonight and that was probably the difference for me in the game. They started with the puck and we chased them most of the night, especially early in the hockey game. When you give a team with the skill and speed they have and the way they move the puck it’s not a good way to start.”

DiPietro was a difference-maker, turning aside 37 shots as Ottawa was outdone 39-26 in the shooting department. Ottawa’s penalty kill came up big numerous times in Game 1 as they held a high-powered Storm power play to 1-for-9 on the night.

Chmelevski earned first star honours with his third four-point contest of the 2019 playoffs, registering two goals, two assists and a 12-for-16 night in the faceoff circle.

The 67’s win came before an enthusiastic crowd of 7,712 at Landsowne Park taking in their first Rogers OHL Championship Series action since 2005. They become the OHL’s first team to ever own a 13-0 record in the postseason.

Losing the first game of a series is nothing new for the 2019 Storm who are the first team in OHL history to overcome two different 2-0 series deficits. They’ll look to return to form after an off-day on Saturday as the puck drops on Game 2 at 2:00pm on Sunday afternoon.