67’s’ Tolnai looking to get everything out of overage season 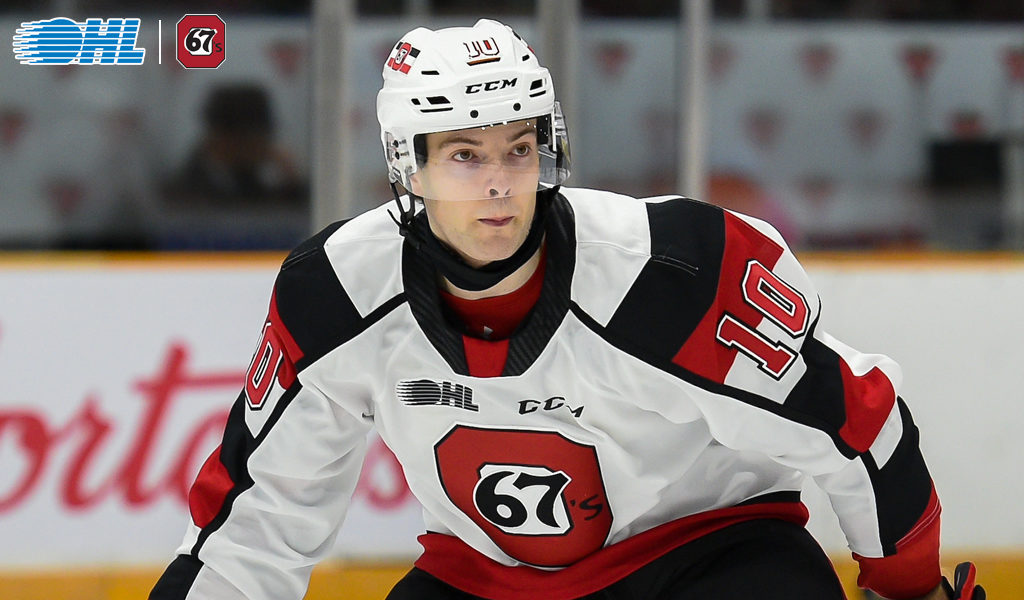 Junior hockey careers are short, and there’s nothing you can do to slow down the hands of the clock to prolong it.

In 2018, the Ottawa 67’s used the 18th overall pick in the OHL Priority Selection on a forward from Oakville, Ontario, Cam Tolnai. The young centreman took the ice for his first season in 2018-19, and immediately felt success, as the Barber Poles went on to win 50 games. A lot has changed since then, we have gone through a global pandemic, and Tolnai has grown both on and off the ice, but that experience still resonates with the 20-year-old.

“It has been tremendous,” Tolnai said of his experience with the Barber Poles so far. “Coming to Ottawa, we were supposed to be decent in my first year, but no one really expected us to contend to win. We had Tye Felhaber score 59 goals, and that’s kinda similar to the season I want to have this year, where some people might be counting you out, but having that breakout year.”

With a missed season from COVID-19, Tolnai’s growth has been different than others. After two seasons where his team won 100 games combined, he was forced to sit out, and then came back as one of the team’s only remaining veteran players. He had to grow up quickly, and it was odd, but it didn’t stop him from being a student of the game, coming to the rink every day looking to get better.

“It’s ironic joking around that I’m the old guy, and yet, I’m just 20 years old,” Tolnai said. “I think I still have a lot to prove, a lot to learn, and Dave Cameron is still teaching us the finer details every day. Getting one percent better every day is the attitude we have on the ice, and in the room.”

Despite having just 108 games of OHL experience to his name, Tolnai was named one of the 67’s six alternate captains during the 2021-22 season. He drew on his experiences with some of the older, more veteran players from his first two seasons, and did everything he could to be a leader in the dressing room.

“It was an honour,” Tolnai said. “Obviously, we had a large leadership group, and we were just trying to use what we had learned before from being around some of the older guys with how they led. Guys like Sasha Chmelevski who was one of the leaders in my first year, Noel Hoefenmayer in my second year, Kevin Bahl, those kinds of guys.”

Heading into this season as one of two overage players on the 67’s roster, Tolnai’s coach will be looking to him to be the same sort of veteran presence.

“We expect [leadership] out of all of our older guys,” Cameron expressed. “That’s part of the responsibility of being a good teammate. He’s one of the veterans that we have that does that.”

Tolnai’s leadership has been appreciated by some of the younger players, especially considering the 2021-22 season gave the Barber Poles an abnormally small veteran group, and an exceptionally high number of first-year players.

His leadership wasn’t just good for the young players, however. Even some of the veteran players, including Adam Varga (who was one of the team’s two overage players last season), learned a lot from Tolnai.

“He’s definitely unique,” said Varga jokingly. “He’s a great kid. He’s a guy that I had been on a team with for three years. He was a first-round pick for a reason. He’s a great player, very professional, on and off the ice.”

“Last season, we had some deep discussion about each other’s lives and our future. I told him that it goes by super fast, and you just have to enjoy every moment, work as hard as you can, and you have to dream big. You have to have faith in yourself, and you have to set goals, and even if you don’t reach those goals, you have to work hard enough and everything will sort itself out.”

Now as an overager himself, however, Tolnai knows that his leadership is going to need to be taken to the next level. He is the oldest player on the team by almost six months, and the young players are going to come to him when they have concerns.

“You talk when you need to talk, but you have to remember that some of these guys are 16,” Tolnai said. “They haven’t experienced what we have experienced, so you have a lot more one-on-one conversations and give them little pointers here and there, trying to teach them to be a pro, and how to become an adult. That’s what the [veterans when I was young] did for me, so I want to pass that on.”

“I like to teach the younger guys too. I think I’m decent at faceoffs, so I give them little pointers, especially against some of the 2006-born players, I take them to school a little bit,” Tolnai joked.

Cameron agrees that one of Tolnai’s strong suits is his ability to win faceoffs, and when he needs one the most, Cameron knows that Tolnai is going to give him the best chance to win possession.

“It’s a big part of the game, and it’s a valuable puck possession skill,” Cameron said. “His strength is his faceoffs, but I think that shows that he’s smart, too. He knows what the opposing guy is going to do, and he adjusts. That’s his thought process.”

Not every player is fortunate enough to end their junior hockey career on a team that is on the upswing, but Tolnai appears to be one of the fortunate ones. The Barber Poles were exceptionally young in 2021-22, but this season, they look to take a step forward.

“I’m super fortunate,” Tolnai admitted. “I know some of my buddies who are on teams who aren’t expected to be as good as they were last year. Anthony Costantini and I are really fortunate that our team is trending towards being a good team this season, but we have to make things happen on the ice, and it’s not going to come easy, either.”

“This year is putting it all together. [In 2017-18], they were the eighth seed, and the next year, we led the league in points. That’s the trajectory I want this season, and hopefully, we can do it.”

In his final season, Tolnai is looking to leave his mark on Ottawa, and create a legacy for folks to remember for a lifetime. He has some smaller goals, of course, but there are some big ones, too.

“The goal is to have a good start to the year,” Tolnai said. “That’s the major trend I have seen with some of the older guys, where if they have a good start, they can continue that. Whether it’s scoring goals, getting assists, or even just winning faceoffs and doing the little stuff, I just want to help my team win, however that is.”

“I want to bring a championship back to Ottawa. In my first and second years, we were so close, and we could taste it. I want to get redemption for all the other guys who were around and didn’t get the chance to win it. I want to be a great person in the community, someone that all the young fans can look up to. I want also to be a leader on and off the ice.”

Varga knows that leadership won’t be an issue for Tolnai this season, but he’s still going to be watching games and cheering for him to take the next step on the ice, on a personal level.

“I’m excited to see what he can do this season,” Varga said. “Last season was kind of a breakout season for him, but I’m sure there’s a lot more in store for him. He’s got a high ceiling, and I’m excited to see how he is this season, because last year, he was a big leader for us. If we ever had a down period, you would hear him in the room talking to the guys saying what we could do better, but he also leads by example on the ice.”