67’s’ Tourigny and Boyd to lead with Hockey Canada 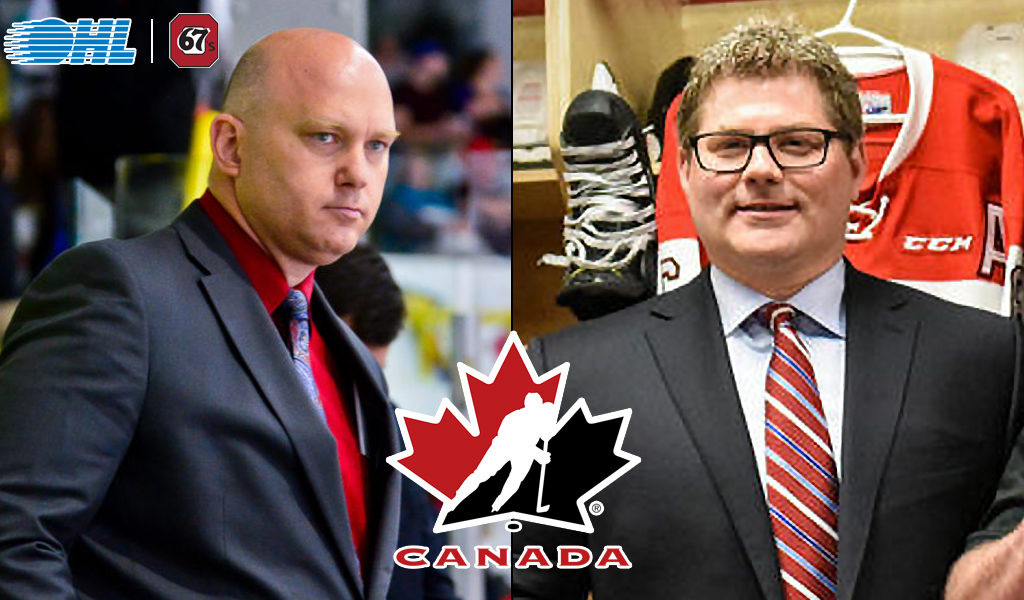 CALGARY, Alta. – Preparations for the 2020-21 season are underway, and Hockey Canada will be working with three accomplished Canadian Hockey League (CHL) executives as part of its Program of Excellence management group.

James Boyd (Mississauga, Ont./Ottawa, OHL) will make his debut as a member of the POE management group with the under-17 program, guiding three Canadian teams at the 2020 World Under-17 Hockey Challenge in Charlottetown and Summerside, P.E.I. Martin Mondou (Grand-Mère, Que./Shawinigan, QMJHL) and Alan Millar (Tottenham, Ont./Moose Jaw, WHL) return to the program for the third-consecutive year, with Mondou taking over the under-18 program for the 2020 Hlinka Gretzky Cup and Millar advising the under-20 program and Canada’s National Junior Team.

The management group will work alongside Shawn Bullock (Wainwright, Alta.), Hockey Canada’s director of men’s national teams, and head scout Brad McEwen (Whitewood, Sask.), as well as Hockey Canada’s national teams staff. Day-to-day operations for the POE management group include assisting in coach and player selections, supporting the coaching staffs and providing input during camps and tournaments throughout the season.

In addition, André Tourigny (Nicolet, Que./Ottawa, OHL) has been named the head coach of Canada’s National Junior Team for the upcoming season. Tourigny returns to the team after helping Canada to a gold medal at the 2020 IIHF World Junior Championship as an assistant coach.

“We are excited to provide consistency to our Program of Excellence by welcoming Martin and Alan back to the program at the U18 and U20 levels, and to have James guide our U17 group,” said Bullock. “We are also thrilled to have André return to Canada’s National Junior Team and build on the momentum from winning a gold medal at the 2020 World Juniors. We believe these four men will provide outstanding leadership as we prepare for the upcoming season, and their experience will prove to be a great asset as we continue to build and excel at all levels of the program.”

Boyd will oversee the under-17 program for the first time after serving as director of operations for Team Canada White at the 2019 World Under-17 Hockey Challenge. He previously served as an assistant coach at the 2003 U18 Junior World Cup and 2004 IIHF U18 World Championship, and was the head coach of Team Ontario at the 2005 World Under-17 Hockey Challenge. Boyd has been the general manager of the Ottawa 67’s of the Ontario Hockey League (OHL) since 2017, leading the team to the OHL Championship Series in 2019 after winning the Hamilton Spectator Trophy as the OHL’s best regular-season team. He also spent time with the Belleville Bulls (1999-2004), Toronto St. Michael’s Majors and Mississauga St. Michael’s Majors (2004-12), and Mississauga Steelheads (2012-17) of the OHL, leading the Majors to a runner-up finish at the 2011 Memorial Cup.

Mondou will take over the under-18 program after leading the under-17 program the last two seasons, which included the 2018 and 2019 World Under-17 Hockey Challenges. He has been general manager of the Shawinigan Cataractes of the Quebec Major Junior Hockey League (QMJHL) since the 2007-08 season, leading the Cataractes to the QMJHL final in 2009 and 2016, and to a Memorial Cup championship in 2012. Mondou won the Trophée Maurice-Fillion as QMJHL general manager of the year in 2014-15.

Millar moves up to the under-20 program after overseeing the under-18 program for the past two seasons, which included a gold and silver medals with Canada’s National Men’s Summer Under-18 Team at the Hlinka Gretzky Cup in 2018 and 2019. Millar was named director of hockey operations for the Moose Jaw Warriors of the Western Hockey League (WHL) in 2010, and became general manager in 2012. He has also spent time with the Sarnia Sting, Guelph Storm and St. Michael’s Majors of the OHL, winning a league championship with the Storm in 1998.

Tourigny takes over as head coach of Canada’s National Junior Team after winning a gold medal as an assistant at the 2020 IIHF World Junior Championship. He is currently in his third season as head coach and vice-president of hockey operations with the Ottawa 67’s, where he won the Matt Leyden Trophy as OHL coach of the year in 2018-19. Tourigny previously spent 11 seasons with the Rouyn-Noranda Huskies (2002-13) and one season with the Halifax Mooseheads (2016-17) of the QMJHL. He also spent three seasons as an assistant coach with the Colorado Avalanche (2013-15) and Ottawa Senators (2015-16) in the National Hockey League. He led Canada’s National Men’s Summer Under-18 Team to a gold medal as head coach at the 2018 Hlinka Gretzky Cup and won gold as an assistant at the 2008 Memorial of Ivan Hlinka tournament. Tourigny also won back-to-back silver medals as an assistant coach with Canada’s National Junior Team at the IIHF World Junior Championship in 2010 and 2011.