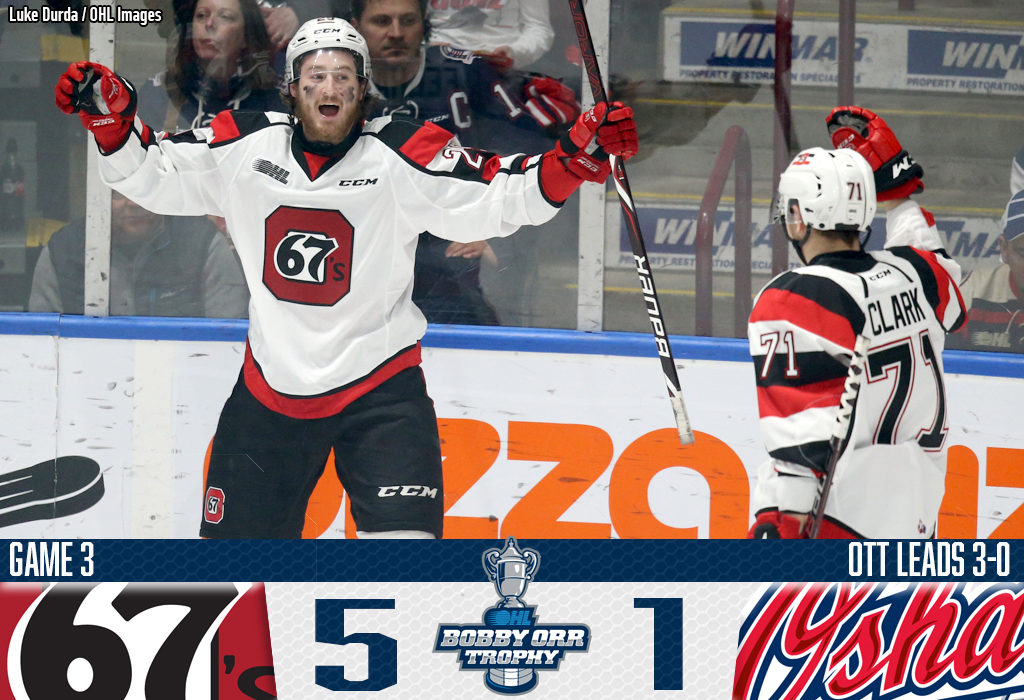 OSHAWA, ON – The Ottawa 67’s played a near-perfect road game, getting goals on the power play, shorthanded and at even strength in a 5-1 win over the Oshawa Generals.

“I was really impressed today,” said 67’s head coach Andre Tourigny. “Two hours before the game I went into the room and I was not sure about the emotion of our guys. When I went back after the warmup I could feel the urgency and the focus in the face of our players.

“They know the history and what happened in the last series between Oshawa and Niagara. They knew the situation and what happened once Oshawa went back home. That was a big game and we won’t take anything for granted moving forward.”

The loss marks Oshawa’s first on home ice in these playoffs as Ottawa outshot the Generals for a third straight game, this time by a tally of 40-29.

Rossi got things started by setting up Felhaber at the net front 10:06 into the first period before Mitchell Hoelscher fed Jack Quinn (3) shorthanded to send Ottawa to the intermission up 2-0.

Rossi jammed in a rebound on the power play with assists from Austen Keating and Noel Hoefenmayer before Lucas Chiodo (7) put Ottawa up 4-1 with 29 seconds left in the second as Kyle Maksimovich and Hoelscher picked up helpers.

Felhaber would add his second of the night 3:51 into the third to round out the scoring as Ottawa controlled the flow of the game, keeping the 3,859 at the Tribute Communities Centre in Oshawa relatively subdued throughout the night.

“We’re just doing a lot of grinding the o-zone and cycling the puck and getting traffic in front of Keyser,” said Felhaber of his team’s 18 goals over three contests. “He’s a really good goalie and the best way to beat them is to get bodies in front of them so we’re having some success with that.”

Massive shoutout to all the #67s fans who traveled down to Oshawa for tonight’s game!#NoQuit pic.twitter.com/LS17254IjH

Generals head coach Greg Walters of complimentary of his opposition following Game 3, but indicated that he’ll be leaning on his veteran corps for more on Wednesday night.

“They’re the best team in the league for a reason and they keep showing it. We have to find a way to compete with them, to skate with them and to stop making mistakes.

We have to compete and we have to hit and a 16-year-old let our team in hits and it just can’t happen at this time of the year against a very good team. You have to get a piece of them every chance you get. You have to bump them and wear them down and we just haven’t done enough of that.”

Oshawa will have two days to regroup before trying to extend their season back on home ice for Game 4 on Wednesday night.