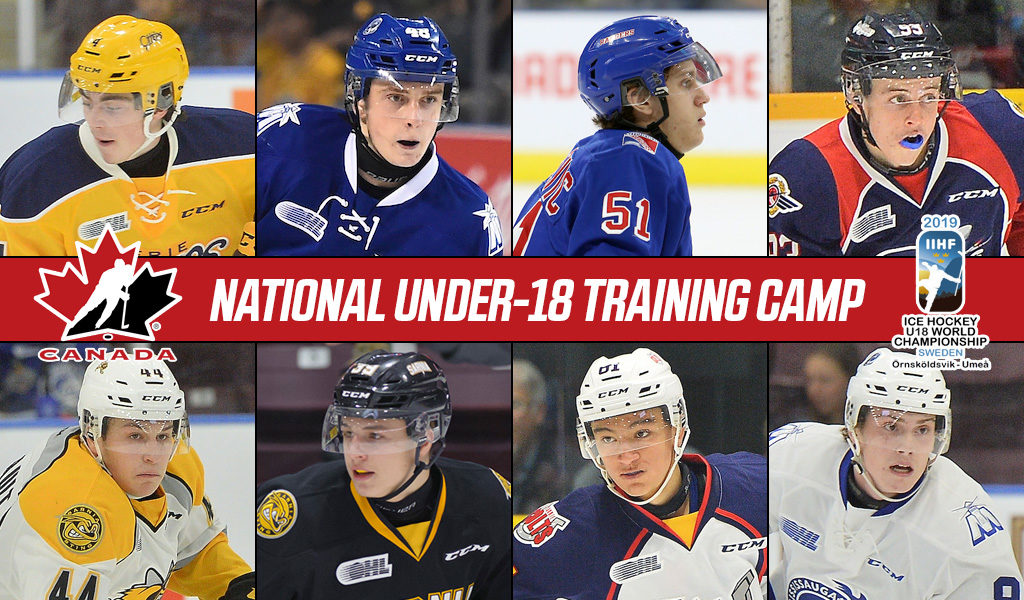 CALGARY, Alta. – Canada’s National Men’s Under-18 Team will begin to assemble in Kisakallio, Finland next week before flying to Sweden for two pre-tournament games ahead of the 2019 IIHF U18 World Championship.

Twenty-three players will gather in Finland for training camp prior to U18 worlds, scheduled for April 18-28 in Örnsköldsvik and Umeå, Sweden.

“The initial list of players for the 2019 IIHF U18 World Championship features a combination of skill and experience, with 21 of the 23 athletes having played internationally over the last two seasons,”  said Brad McEwen, head scout for Hockey Canada. “Our players and staff are excited for the opportunity to represent Canada on the world stage, and we look forward to working towards our goal of bringing home a gold medal in Sweden.”

Over the next week, Hockey Canada and team staff will continue to monitor the Canadian Hockey League playoffs and can invite additional players to training camp before a final roster is named ahead of the tournament.

Players will gather in Kisakallio from April 8-12 for five days of practice before heading to Sweden for two pre-tournament games – April 14 versus Belarus in Umeå and April 15 versus Russia in Örnsköldsvik.

Canada will look to claim gold for the first time since 2013 when it kicks off its tournament schedule against Finland on Thursday, April 18 at 1:30 p.m. ET/10:30 a.m. PT. Canada will also match up against Switzerland, Belarus and the Czech Republic in the preliminary round before the tournament wraps up with the bronze and gold medal games on Sunday, April 28.

TSN and RDS, Hockey Canada’s official broadcast partners, will broadcast 15 games, including all of Team Canada’s match-ups at the IIHF U18 World Championship, all quarter-finals, both semifinals and the bronze and gold medal games.

For more information on Canada’s National Men’s Under-18 Team, please visit HockeyCanada.ca, or follow along via social media on Facebook, Twitterand Twitter.com/HC_Men.