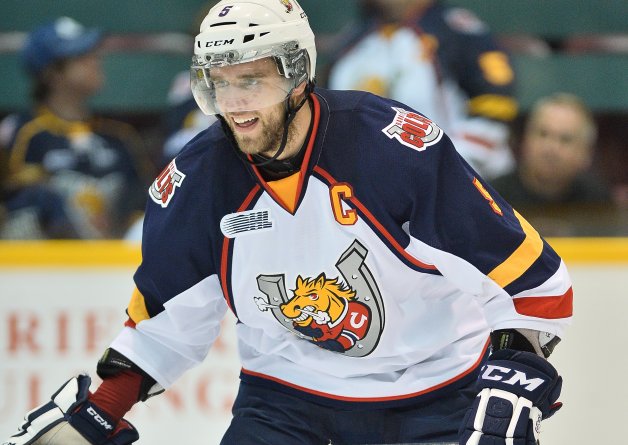 Toronto, ON – The Ontario Hockey League today announced that Aaron Ekblad of the Barrie Colts is the 2013-14 recipient of the Max Kaminsky Trophy awarded annually to the OHL’s Most Outstanding Defenceman of the Year.

Ekblad tied for fifth in scoring among OHL defencemen with 53 points in 58 games but led all OHL blueliners with 23 goals.  He becomes just the second member of the Colts to win Defenceman of the Year honours following Erik Reitz in 2002, and is just the third player in their 18-year-old birth year to claim the honour in the past 20 years following Ryan Ellis of the Windsor Spitfires in 2009, and Bryan Berard of the Detroit Jr. Red Wings in 1995 who became the last OHL defenceman to be selected first overall in the NHL Draft.

“I came into this year with a set of goals I shared with no one,” Ekblad said. “One of those goals was to be given the Max Kaminsky Trophy. I watched Ryan Ellis as a fan of the OHL and again Dougie Hamilton as a competitor while they stapled themselves as the league’s top defencemen. I idolized these players and fantasized being in their shoes and with the help of my teammates and the opportunity from the coaching staff with the Barrie Colts that moment has finally come.”

The Belle River, ON, native is eligible for the 2014 NHL Draft and was listed second among North American prospects by NHL Central Scouting in their final draft rankings.  Selected first overall in the 2011 OHL Priority Selection, Ekblad went on to earn OHL Rookie of the Year honours in 2012.  The Colts’ captain finished tied for third in team scoring also finishing tied for third in the league with 16 power play goals.  This season he had nine multi-point games highlighted by a career-high five-point game on January 11 with four goals and one assist as first star of an 8-5 win over the Kingston Frontenacs.  He represented Canada at the 2014 IIHF World Junior Championship, and captained Team Orr at the 2014 BMO CHL/NHL Top Prospects Game in Calgary.  Ekblad was also recognized by Eastern Conference teams in the annual Coaches Poll finishing first in four categories including Hardest Shot, Best Shot, Best Offensive Defenceman, and Best Defensive Defenceman.

“Aaron has developed into a top two-way defenceman in this league with a bright future ahead of him,” said Colts’ General Manager Jason Ford. “He played so many key minutes for the Colts this season, and demonstrated tremendous leadership traits both on and off the ice. He took on a lot of responsibility for the organization this season, and kept getting better and better as things went on.”

The Max Kaminsky Trophy is awarded each year to the Most Outstanding Defenceman as selected by OHL General Managers.  All 20 clubs submitted a nominee but were not permitted to vote for their own player.  Players received five points for a first place vote, three points for a second place vote and one point for a third place vote.

The award is named in recognition of Max Kaminsky, who enjoyed a 10-year professional playing career that included four years in the NHL with Ottawa, Boston, and Montreal.  After he retired from playing, Kaminsky enjoyed a 15-year coaching career that was capped by winning the Memorial Cup with the St. Catharines Teepees in 1960.

Ekblad will be formally presented with the Max Kaminsky Trophy at the OHL Awards Ceremony which takes place June 3 at the Hockey Hall of Fame in Toronto.  He will also be the OHL’s nominee for CHL Defenceman of the Year.