Alex DeBrincat named Most Outstanding Player of the Year 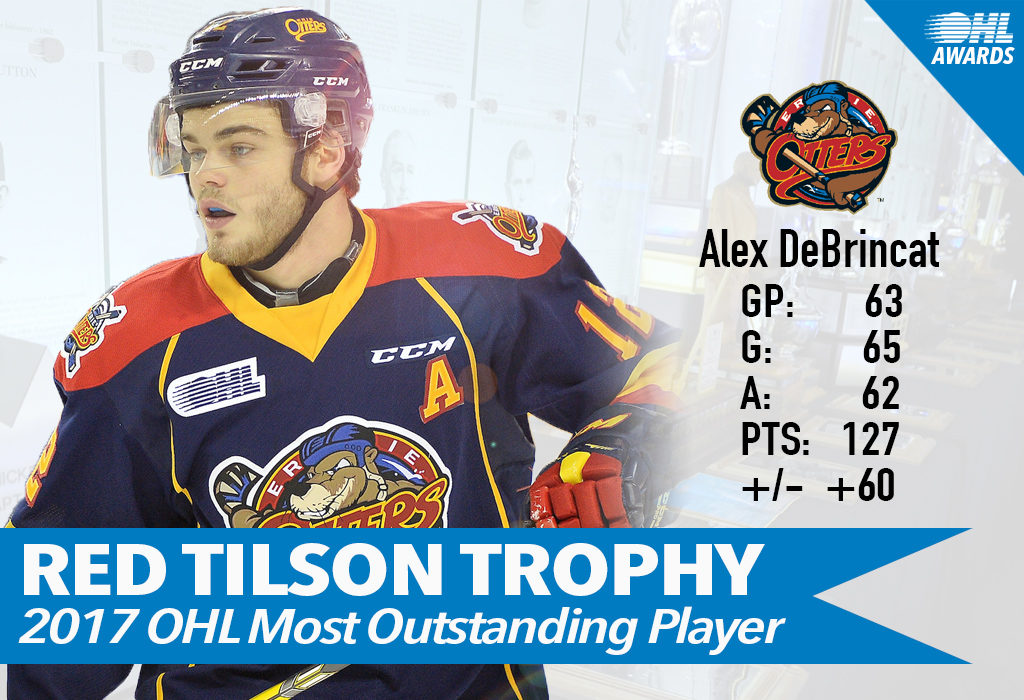 Toronto, ON – The Ontario Hockey League today announced that Chicago Blackhawks prospect Alex DeBrincat of the Erie Otters is the 2016-17 recipient of the Red Tilson Trophy awarded to the OHL’s Most Outstanding Player of the Year as voted by the writers and broadcasters that cover the league.

DeBrincat led the OHL with 127 points in 63 games scoring a league-high 65 goals along with 62 assists and a plus-minus rating of plus-60.  His offensive production helped the Otters capture a second straight Hamilton Spectator Trophy as first overall in the regular season, a third straight Midwest Division crown, and a Canadian Hockey League record fourth straight 50-win season.

“It’s truly an honour to win this award,” DeBrincat said. “A lot of guys want to win this in their career and its definitely a big honour to see who has won it before me. With that said, I wouldn’t have been able to do it without my teammates and the hockey staff here in Erie. Everyone in the organization has believed in me and that means a lot.”

A 19-year-old from Farmington Hills, Michigan, DeBrincat committed to the Otters prior to the 2014-15 season quickly establishing himself as a prolific goal scorer achieving OHL and CHL Rookie of the Year honours and accumulating a resume of scoring records over the course of his most outstanding 2016-17 campaign.  His 65 goals represent a new Otters single season record and mark the third straight year he has eclipsed the 50-goal plateau becoming just the second player in OHL history to accomplish the feat of consistency following Dale McCourt (1974-77).  DeBrincat also became just the third Otter to reach the prestigious 300 career-point milestone and the eighth player in the league’s modern era to record three-straight 100-point seasons.  In three seasons and 191 games in an Otters uniform, DeBrincat scored 167 goals and 165 assists for 332 points cementing his status as the Otters all-time leading goal scorer and the leading American goal scorer in OHL history.

“We are absolutely elated for Alex,” said Otters General Manager Dave Brown. “His continued perseverance and determination is what continues to allow him to excel in all areas. Alex’s continued dedication to his teammates, organization, and his professional development is something that our entire organization admires and hope will be passed along to others.  The Otters are thrilled for Alex and his family to be recognized with such a prestigious award.”

Following his second round, 39th overall selection by the Blackhawks in the 2016 NHL Draft, DeBrincat’s 2016-17 highlights also included 36 multi-point performances featuring a trio of five-point contests, three-time recognition as the Pioneer Energy OHL Player of the Week, and OHL Player of the Month nods for November and February.  DeBrincat matched Mike Ricci’s 1988 mark with goals in 19 consecutive games from January 24 to March 10, and finished the season riding a 27-game point-streak that began on January 14 and tied Connor McDavid’s 2014-15 team record.  He was recognized in the Western Conference Coaches Poll finishing first in the Best Shot category and was voted Most Dangerous in the Goal Area for a third straight season.  The Otters’ representative on the OHL’s Scholastic Team was also honoured across OHL rinks this season with a league-high 26 three-star selections including 13 times as first star and 12 times as second star of the game.

“Alex is very deserving of this award as his performance was remarkable this season,” said Blackhawks Vice President and General Manager Stan Bowman. “His ability to score goals has been consistent over the last three seasons with Erie and he has done a lot to contribute to the success of his team. We wish him and his team the best during their playoff run and look forward to Alex joining the Blackhawks organization in the future.”

The Red Tilson Trophy is the most prestigious individual award presented by the Ontario Hockey League.  First presented in 1945, the trophy is named in honour of Albert “Red” Tilson, who was killed in action in Europe during World War II. Tilson was the OHA scoring champion for the 1942-43 season after scoring 19 goals and 38 assists for 57 points in 22 games with the Oshawa Generals.

Accredited media were asked to select their top three choices from the 20 nominees submitted by all 20 member clubs.  Players received five points for a first place selection, three points for second place and one point for a third place selection.  DeBrincat received 314 points in the voting process including first place votes on 85% of all ballots while receiving a top-three selection from 97% of the media polled.  Montreal Canadiens prospect and OHL Goaltender of the Year Michael McNiven of the Owen Sound Attack finished in second with 157 voting points, followed by Florida Panthers prospect Adam Mascherin of the Kitchener Rangers in third place with 34 voting points.