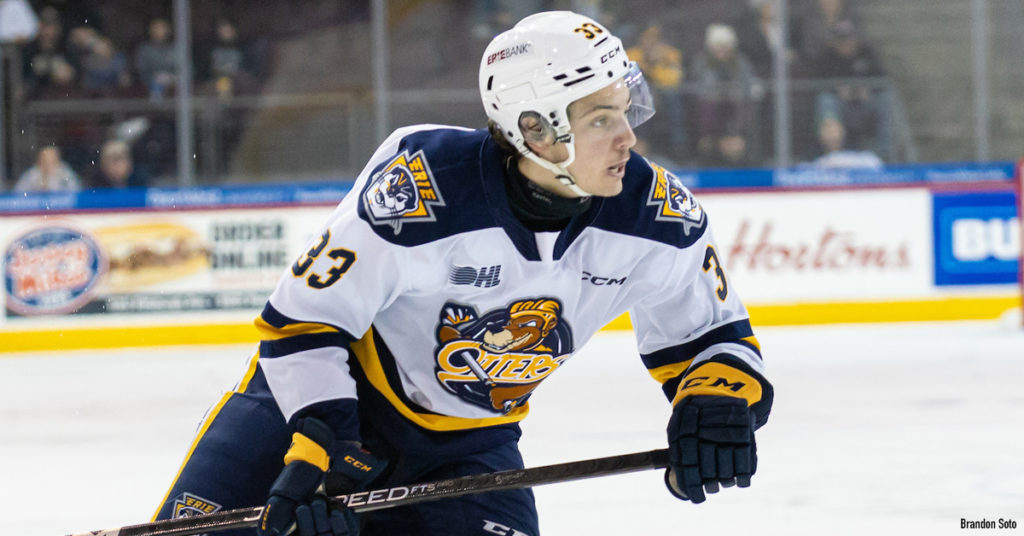 The nephew of Marty McSorley, one of the toughest customers to ever play the game, Sam Alfano wears the number 33 on his back, but it’s not entirely for the reason you might think.

The number 33 has run in Alfano’s family for some time, and Uncle Marty, who skated alongside the great Wayne Gretzky in both Edmonton and Los Angeles, certainly had a measure of influence on that – however it’s been another inspiration, one found at the intersection of Erie and Alfano’s hometown of Cayuga, Ont. that inspired the request.

“When I got traded here, I knew it was a no-brainer for me to request the number, just because of the relationship we have with the Baird family,” said Alfano, an invite to New York Rangers training camp this past September. “It’s something I’m very proud of, and honours a player that I’m told played every shift like it was his last one.”

Jason Baird, who also wore 33 for the Otters, was a fan favourite in Erie. The feisty winger scored at least 25 goals in three of his four seasons from 1997-2001 and his 699 career penalty minutes remain the most in franchise history.

“If you ever told Bairdy it couldn’t be done, Bairdy found a way to get it done,” former long-time Otters owner and general manager Sherry Bassin once said.

Baird’s seven-year pro career was cut short after he suffered severe burns as a result of a lawn mower explosion while landscaping in 2008. He passed away in January 2014 at the age of 33 following complications from pancreatitis, a condition resulting from the years of medication he’d been taking following the incident in 2008.

“At the time of the trade, Jason’s brother Joey actually texted my dad and said it’d be really cool if I wore number 33,” said Alfano. “Their family has made it out to a couple games and they’ve told me I wear the number well, so that means a lot to me just knowing I’m following in the footsteps of a guy who played the game so passionately and wanted to go out there and win every shift.”

Like Baird, Alfano grew up in Cayuga, a community of approximately 2,000 located 40 minutes south of Hamilton on the banks of the Grand River. It also produced other hockey names such as McSorley and the late former Soo Greyhounds netminder and eventual NHL standout Ray Emery.

A 6-foot-3, 205Ib. right-winger, Alfano was part of the OHL’s Covid-affected 2020 Priority Selection class that missed out on the 2020-21 campaign. Despite those challenges, Alfano’s size and ability to create offence led to a 25-point rookie season with the Peterborough Petes last season. The former 23rd overall OHL Priority Selection choice and OMHA SCTA U16 AAA Player of the Year was dealt to Erie this past August, with former third overall OHL pick and Vancouver Canucks prospect Connor Lockhart going to Peterborough.

Alfano was sidelined with an early season bout of mononucleosis, but has been getting back into a rhythm of late and has 13 points (6-7–13) in his 16 games.

“He had a really strong pre-season for us before getting mono,” said Otters head coach B.J. Adams. “He gives us a dimension that we didn’t have before – a big strong power forward that can create opportunities at the net front, work the puck out of the corners along the wall and drive wide with his size and speed.

“Unfortunately Sam had to miss a month of the season, but we’re starting to see him emerge as the kind of impact player we know he can be in this league.”

The Otters have battled a combination of injuries and lengthy suspensions to some key pieces in the opening quarter of the season, resulting in an 11-11-3-0 record entering back-to-back home games this weekend. Getting back into the postseason is top priority for the franchise that produced such names as Connor McDavid, Alex DeBrincat and Dylan Strome.

With that team-based incentive along with an individual goal to reach the next level and maximize his potential, Alfano says finding consistency is the key for both himself and the Otters as a team. They recently defeated the Mississauga Steelheads 7-3 before falling to the Saginaw Spirit 8-3 on home ice three nights later.

“I think trust is a big thing,” he said. “There’s a lot of trust here, and I think that’s going to help us get over the hump. An OHL season is 68 games and that includes injuries, suspensions, three-in-threes and the usual ups and downs, but being in it together as a team is important and I really do feel like we have that here.

🗣 "GET THAT CROWD GOING, SAM ALFANO!"

Sam Alfano opens the scoring as the @ErieOtters lead 1-0 in their home opener. pic.twitter.com/C2CPsz8B48

“From the moment I got to Erie everyone’s been great,” he added. “When your coaches and teammates truly believe in you that’s all I can ask for as a player. I’ll leave games sometimes and feel I’ve taken steps forward and other nights it hasn’t gone that way – but we’re in this together as a group and when everyone focuses on their responsibilities and playing their game, the whole team benefits.”

With veteran forwards Colby Saganiuk (injury) and Liam Gilmartin (suspension) out of the lineup beyond the holiday break, opportunity knocks for Alfano, who will be looked upon to step in and fill responsibilities up front.

“I know my strengths and I think I can be an impact player in this league, the goal is to be able to do that every game and help our team bring a championship to Erie.”

Number 33 returns to the ice for the Otters on Friday night when the Windsor Spitfires visit Erie Insurance Arena.