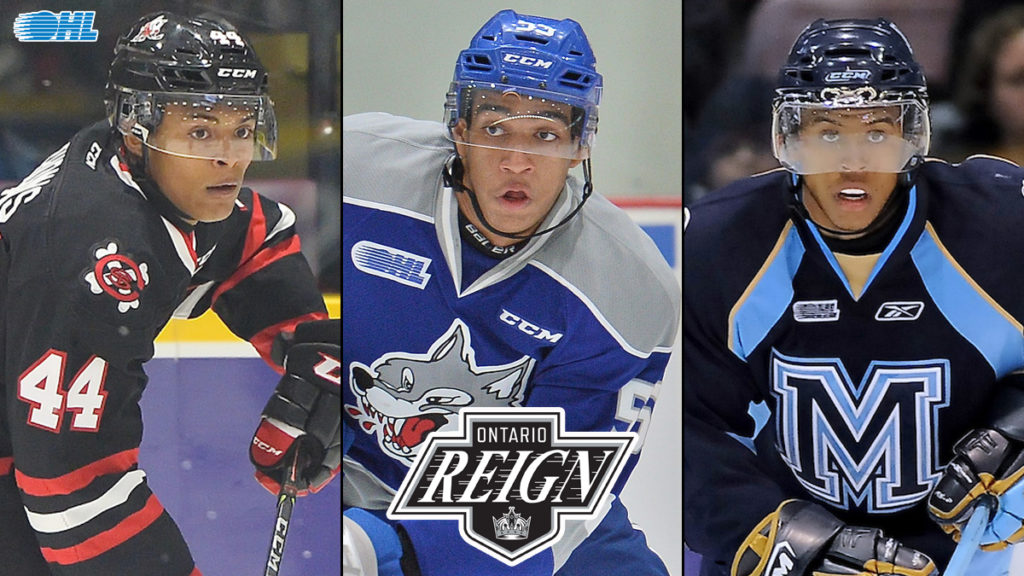 OHL products took centre stage in an incredible comeback by the American Hockey League’s Ontario Reign on Sunday. What’s more, Akil Thomas, Quinton Byfield and Devante Smith-Pelly excelled on an all-Black forward unit, the first of its kind in quite some time.

Thomas, who is best known for his gold medal game winning heroics for Canada at the 2020 World Juniors, sniped a natural hat trick inside the final 3:07 of regulation to resurrect the Reign from a 4-1 deficit. He’d go on to score the winner in the shootout as Ontario topped rival Bakersfield 5-4.

“We found out in the morning, as soon as I saw it, I texted my dad,” Thomas told NHL.com. “The accomplishment was unreal. It was a crazy game. I definitely did not expect that to happen. Obviously to get my first hat trick, to obviously get the win, was the best feeling because the game kind of felt out of reach for quite some time.”

Thomas’ first pro hat trick gives him six goals and five assists in 19 games this season. The 21-year-old enjoyed a highly productive OHL career between the Niagara IceDogs and Peterborough Petes from 2016-20, amassing 315 points (105-210–315) in just 241 games. He was Los Angeles’ second round (51st overall) pick in the 2018 NHL Draft.

The second overall pick from last summer’s NHL Draft, Sudbury Wolves franchise cornerstone Quinton Byfield picked up a goal and an assist to stretch his current point streak to five games on Sunday. The 6-foot-4, 215Ib. centreman has 13 points (5-8–13) in 19 contests with Ontario following an 82-point effort (32-50–82) in 45 OHL games last season.

“Maybe we can inspire more Black kids to feel like they have a place in the game.” — @AkilThomas2

Smith-Pelly returns to North American following a season in China playing for the KHL’s Kunlun Red Star in 2019-20. The 6-foot, 214Ib. winger from Scarborough, Ont. picked up an assist on Sunday in his third game since since signing a Pro Tryout Offer with the Reign on March 13. A former Stanley Cup champion with the Washington Capitals in 2018, Smith-Pelly played three seasons with the Mississauga St. Michael’s Majors from 2008-11 before making the jump to the NHL with the Anaheim Ducks as a 19-year-old in 2011-12.

A hat trick in the final 3:07 of regulation.

One more in the shootout.