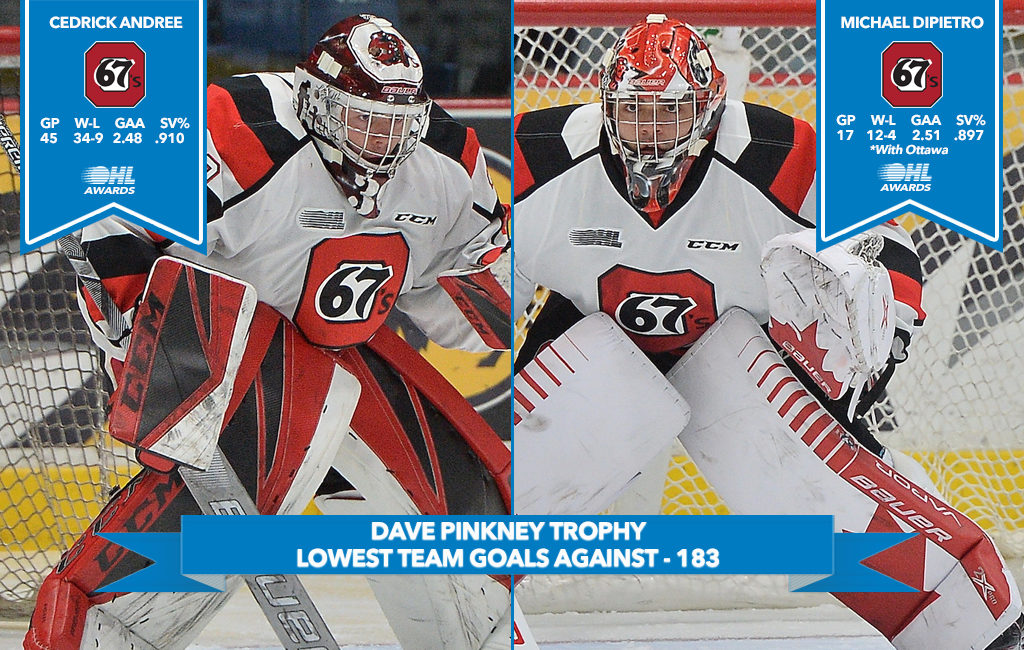 The Ottawa 67’s allowed the fewest goals in the OHL during the 2018-19 season with just 183 against, backstopped primarily by the tandem of Cedrick Andree and Michael DiPietro.

The pair finished first and second among league leaders in goals-against-average with DiPietro’s overall mark of 2.40 just ahead of Andree’s 2.48.  The netminders were instrumental in delivering a franchise record of 106 points which included 50 wins for just the second time in team history en route to the club’s fourth Hamilton Spectator Trophy as regular season champions.

Andree, an 18-year-old from Orleans, Ont., appeared in 45 games for the Barber Poles amassing an overall record of 34-5-2-2 with a sparkling .910 save percentage.  The 12th round pick in the 2016 OHL Priority Selection also recorded four shutouts this season which tied for third most in the league beginning with the first of his career on November 1.

DiPietro, a 19-year-old from Amherstburg, Ont., joined the 67’s in a December trade with the Windsor Spitfires.  As a member of the 67’s he played 17 games carrying a record of 12-4-0-0 with a goals-against-average of 2.50 and save percentage of .897 with three shutouts.  DiPietro made OHL history this season by setting the league’s all-time shutout record with 17 and finishes his illustrious career with 19.  He finishes his four-year OHL career as one of the best all-time winning a 2017 Memorial Cup title, earning 2018 Goaltender of the Year honours, representing Canada at the 2019 IIHF World Junior Championship, and backstopping his teams to 98 wins in 174 games.  The third round pick of the Vancouver Canucks in the 2017 NHL Draft made his NHL debut on February 11 during his stint as an emergency recall.

The Dave Pinkney Trophy is awarded annually to the goaltending tandem from the team that allows the fewest goals against during the regular season.  Last season, Matthew Villalta and Tyler Johnson were part of a Sault Ste. Marie Greyhounds club that allowed 186 goals against to claim the award.