Andree and Maksimovich named CHL Top Performers of the Week 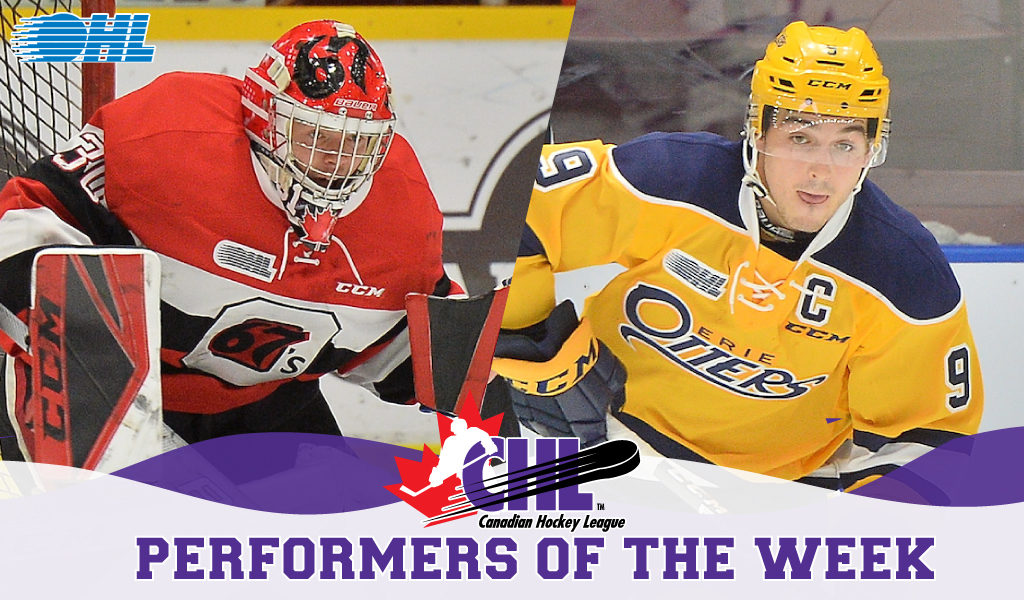 OHL standouts Kyle Maksimovich of the Erie Otters and Cedrick Andree of the Ottawa 67’s have been named CHL Top Performers of the Week. Here’s a closer look at their latest performances.

Erie Otters captain Kyle Maksimovich is the CHL Player of the Week for the regular season week ending December 30 recording seven points in two games including four goals and three assists with a plus-minus rating of plus-3.

Maksimovich started the schedule’s second half with a pair of multi-point efforts while reaching a personal milestone and climbing the Otters record books during the club’s Michigan road trip.  His return from the holiday break featured a hat-trick performance plus an assist as first star of Friday’s 9-2 win over the Flint Firebirds, then a goal and two assists as third star of Saturday’s 6-4 loss to the Saginaw Spirit.  Maksimovich continued his strong play into the New Year with a pair of assists in Monday’s 4-3 shootout loss to the Hamilton Bulldogs to close 2018.  Over the weekend he became just the ninth player in Otters history to reach the century mark for career goals while moving into fifth on the club’s all-time points list.  The Otters are currently battling for a spot in the OHL’s Western Conference playoffs where they sit in ninth place with a 14-20-1-1 record trailing the Windsor Spitfires by three points.

A 20-year-old from Hamilton, Ont., Maksimovich is playing in his fifth career season with the Otters after being chosen in the third round of the 2014 OHL Priority Selection.  He’s currently ninth in league scoring with 51 points in 36 games tallying 20 goals and 31 assists.  The 2017 OHL champion has played in 289 career games for Erie scoring 100 goals and 176 assists for 276 points.

Also considered for the award this week was San Jose Sharks prospect Noah Gregor of the Prince Albert Raiders with five goals and two assists for seven points in three games, and defenceman Yann-Felix Lapointe of the Sherbrooke Phoenix who scored twice with two assists for four points in two games.

Cedrick Andree of the Ottawa 67’s is the Vaughn CHL Goaltender of the Week for the regular season week ending December 30 posting a 2-0-0-0 record with a goals-against-average of 1.50 and save percentage of .951.

Andree started the schedule’s second half with 58 saves in two victories for the OHL’s Eastern Conference leading 67’s against their toughest competition in the standings.  His return from the holiday break featured a 30-save performance as first star of Friday’s 4-1 win against the second place Niagara IceDogs, then 28 saves during Sunday’s 5-2 win over the third place Oshawa Generals.  The 67’s currently hold a 27-7-3-1 record for 58 points and despite a New Year’s Eve loss to Niagara on Monday, still lead the IceDogs by nine points.

An 18-year-old from Orleans, Ont., Andree is playing in his second season for his hometown team after being chosen in the 12th round of the 2016 OHL Priority Selection.  He currently leads the OHL in wins carrying an overall record of 23-4-1-1 while his goals-against-average of 2.56 and save percentage of .909 are among the league’s leaders.