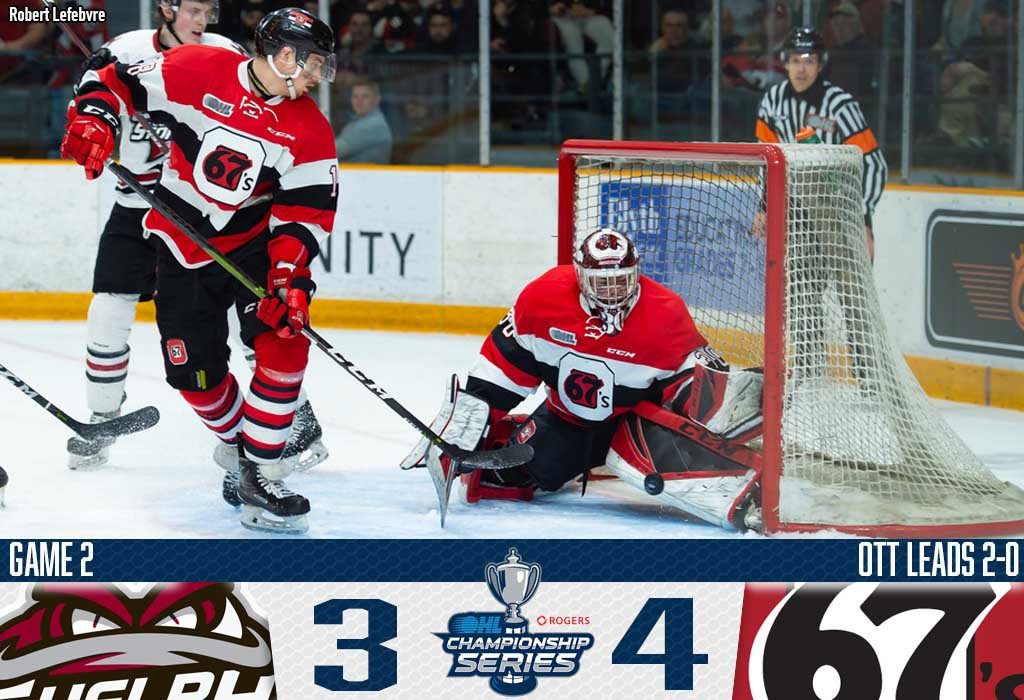 Ottawa, ON – Thrust into action for his 2019 playoff debut late in the first period of Game 2, Cedrick Andree did his part to backstop the Ottawa 67’s to an OHL record 14th consecutive postseason victory on Saturday afternoon.

A 34-game winner during the regular season, Andree answered the call when Michael DiPietro went down with what appeared to be a lower body injury, helping the 67’s rally back from a 2-0 deficit to defeat the Guelph Storm 4-3 and take a 2-0 lead in the Rogers OHL Championship Series.

“It was definitely pretty stressful when I saw Mikey got hurt. I don’t know if I can say the first couple words that went through my mind when I went out there,” said Andree, drawing laughter from the media in attendance. “All around we’ve got a great team and the boys supported me throughout the game and they kept on coming to me so that really helped out.

Austen Keating (2) scored on a late first period five-on-three power play to give the 67’s life before they surged past the Storm with three goals in the second frame.

Guelph pushed hard in the third though, outshooting Ottawa 16-7 as Andree provided multiple cross-crease saves to preserve the victory before a capacity crowd of 8,655.

“The depth of our team again made the difference and we seem to say this all the time,” said 67’s head coach Andre Tourigny. “We have depth up front, depth on the back end and depth in the net. We have two number one goalies. Ceddy was leading the CHL in wins before we made the trade for Mikey.

“He proved it again today the quality of goaltender he is,” Tourigny added of Andree, who made 26 saves in his first appearance since March 17th. “Without the key saves he made in the third period we’re probably still out on the ice right now.”

The Storm responded well from Thursday’s 7-2 loss in Game 1 as Anthony Popovich stood tall in the early going before Alexey Toropchenko (7, 8) and Keegan Stevenson (2) scored 56 seconds apart in the first period’s 13th minute.

Keating connected with Sasha Chmelevski and Lucas Chiodo to bring the Ottawa faithful to their feet with 20 seconds left in the first as that momentum carried over into the second, leading to 67’s goals from Kyle Maksimovich (7), Tye Felhaber (14) and Sasha Chmelevski (9).

Maksimovich tied the score at two just 1:31 into the second, getting free in the slot to swat a bouncing puck over the shoulder of Popovich from close quarters.

Marco Rossi created an opportunity five minutes later with some slick stick work down low, working the puck back to the point for Lucas Peric whose shot was blocked, rolling onto the stick of a waiting Felhaber who put Ottawa ahead 3-2.

Chmelevski’s insurance marker came off the rush as the 67’s entered the offensive zone. Overage winger Chiodo collected his third assist of the contest, finding Chmelevski across the ice who wristed a shot over the blocker of Popovich at 12:51.

Ottawa controlled the flow in the second, outshooting Guelph 18-9 to send the Storm to the dressing room trailing by two.

Guelph’s third period had the 67’s on their heels as Toropchenko scored his second of the afternoon 1:15 into play to cut the Ottawa lead to one. The big St. Louis Blues prospect jumped on his own rebound to rifle a shot up under the cross bar.

Andree bounced back quickly and turned out to be the difference-maker in Game 2, turning away Pavel Gogolev for one of his finest saves with seven minutes left on the clock.

“I thought we had great momentum to get the 2-0 lead, things were going well,” said Storm head coach George Burnett. “We took a couple sloppy penalties at the end of the period and things tilted pretty quickly. The second period, there’s not words for it.

“If I can find anything positive, our third period I thought we pushed pretty hard,” he added. “We played with a little bit of intensity, had the puck a lot more, won more puck battles and created a number chances. Their guy had to be really strong in the net to prevent us from tying the game.”

The Storm missed 6-foot-7 defender Fedor Gordeev who served a one game suspension following a five-minute major in Game 1. Veteran forward Nate Schnarr left the game in the second period after taking a stick up high and didn’t return.

Ottawa was without the services of big defenceman Kevin Bahl in Game 2, resulting in an increased role for rookie defender Alec Belanger. DiPietro left the game with 5:10 to go in the first period and did not return.

The 67’s surpass the 2016 London Knights with their 14th straight win to set a new OHL playoff record. They’re in elite company alongside the QMJHL’s 2013 Halifax Mooseheads who also won 14 in a row, just shy of the CHL record holder 1986 Hull Olympiques who won 15 consecutive.

The Storm return home for Game 3 on Monday night trailing in the series 2-0. Based off the playoff journey that has seen them become the first team in league history to overcome two different 2-0 series deficits, one could say they’ve got the 67’s right where they want them.

Game 3 action gets underway from the Sleeman Centre in Guelph on Monday night at 7:00pm.