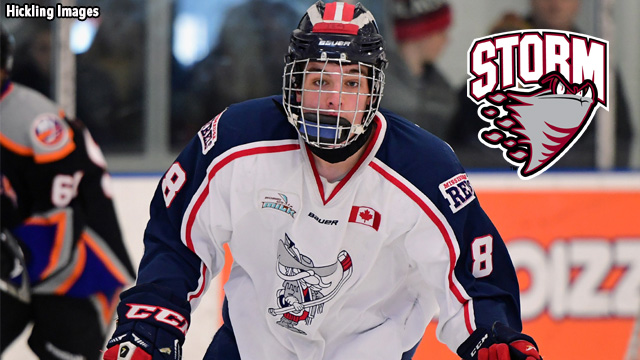 GUELPH, ON – General Manager and Head Coach George Burnett announced Tuesday that Anthony Aguanno and his family have committed to the Storm.

Aguanno, a five-foot-10, 177-pound defenceman from Mississauga, was the Storm’s third round pick (42nd overall) in the 2017 OHL Priority Selection.

“Anthony is a versatile, intelligent puck-moving defenceman that competes hard in every game,” said Burnett. “Anthony has continuously been a part of a winning team for many seasons. We have every expectation that he will be an important part of the Storm program moving forward.”

Aguanno enjoyed an outstanding minor midget season with the Mississauga Rebels in 2016-17, leading a very strong defence group in scoring, with 40 points (11 goals, 29 assists) in 48 games played. The Mississauga native won a record eighth consecutive GTHL championship, helping the Rebels to a seven-game series victory over the Toronto Marlboros before posting six points in five games at the OHL Cup.

“It was an absolute pleasure to have been selected by the Guelph Storm, and signing is a dream come true,” said Aguanno. “The Storm are an amazing organization and the support from the community in Guelph is great. I will continue to work my hardest and hopefully, I can contribute in the very near future.”

Following his successful 2016-17 season, Aguanno participated in the OHL Gold Cup in May, emerging victorious with the ‘GTHL Red’ team. In five games at the tournament, he posted five points (two goals, three assists), including a goal in the championship game.

Aguanno will join the rest of the Storm players and prospects as training camp hits the ice in late August.