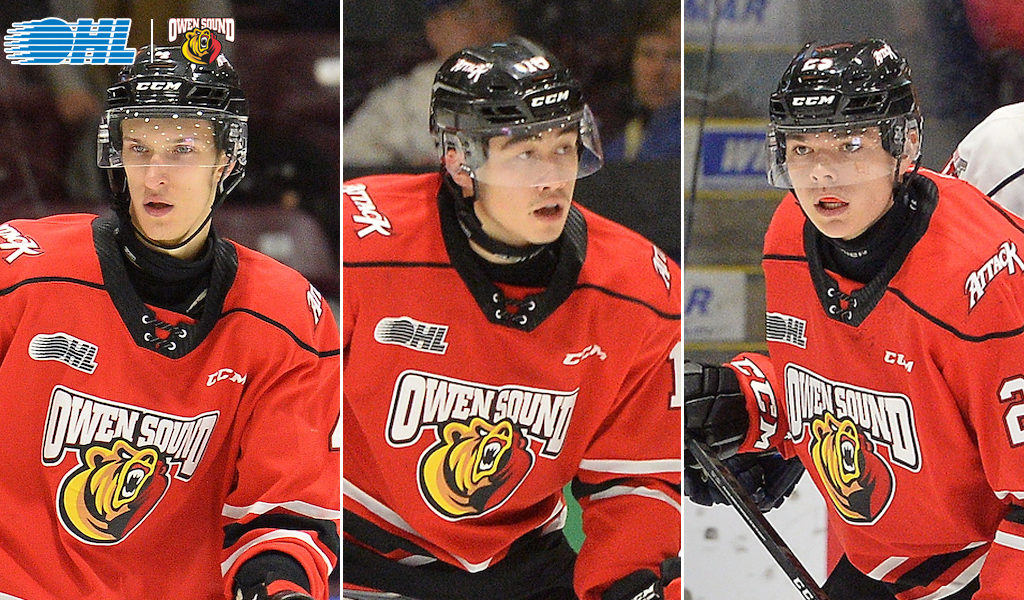 The Owen Sound Attack had their 2019-20 season come to a disappointing finish when it ended prematurely due to the COVID-19 pandemic. While the start date of the 2020-21 season is still yet to be determined, it hasn’t deterred the players from being ready to get back in the best shape of their life. After taking time off at the end of the season to recover from the strain of playing 60+ games of hockey alongside practice every day, the boys started to prepare for the return of hockey.

The closure of gyms across North America has been a thorn in the side of the skaters, but they’re finding a way to put in the work. Attack forward Kaleb Lawrence will return to the Scenic City for his sophomore season this fall and he’s been staying busy: “I’ve been working out a lot. I’ve been lucky to be on the ice a lot, doing whatever I can to be active. Golfing, hiking and mountain biking have been great this summer.”

Second-year defenseman Sam Sedley isn’t sleeping in: “I’ve been working out with a trainer from Stratford every morning at 9 am. Lots of roller blading and running.”

Igor Chibrikov is hoping to hear his name called at the NHL Draft later this year and after a successful season on the Attack blueline, he’s continuing to literally build up his stock. “There’s a gym I’ve been working out at that took all of their equipment out to the parking lot to make things safe.” Chibrikov has spent the summer in Owen Sound where he can be spotted riding around town: “I’ve been riding the bike a lot to stay in shape.”

18-year-old goaltender Nick Chenard has recently gotten back onto the ice, but was keeping busy off of it: “I’ve been working out three times a week with my goalie coach, and I’ve been keeping in contact with Red Dog [Greg Redquest, Attack Goaltending Coach]. I just got back to skating this week but I feel great.”

Elora native Griffin Wilson has been focusing on his fitness, but he’s also learning some new skills in his time away from the game: “I’ve been skating once or twice a week, working out four times a week, playing golf, roller blading and swimming in the pool. But I’ve also been learning how to bake.”

Forward Barret Kirwin looks to return to the club as an overager this year and he’s looking to build on his team leading 30 goals from last season: “I’ve been working out and going on runs, skating sometimes twice a day. A big thing has been working out 4-5 times a week at my gym, Mind 2 Muscle.”

Attack assistant GM/coach Joey Hishon says it’s a meaningful time for players: “These kids have an opportunity right now that’s unprecedented. It’s going to be obvious who took advantage of their time and used it to get stronger and faster and do the work.  It’s been really cool seeing what Barret Kirwin has been able to do. I’ve seen videos of him working out this summer and he looks like he’s in the best shape of his life.” He says it’ll be a big advantage for the Attack: “I think our guys have been great, but if players haven’t been putting in the work they’re going to be exposed and we hope that’ll work in our favour.”

While an exact start date has yet to be nailed down by league officials, players know that they’ll have to be ready to go whenever it may be. In an unpredictable year, the only constant has been time. Spending it well will pay dividends when the team gets back on the ice.