Attack’s Binnington is Goaltender of Year 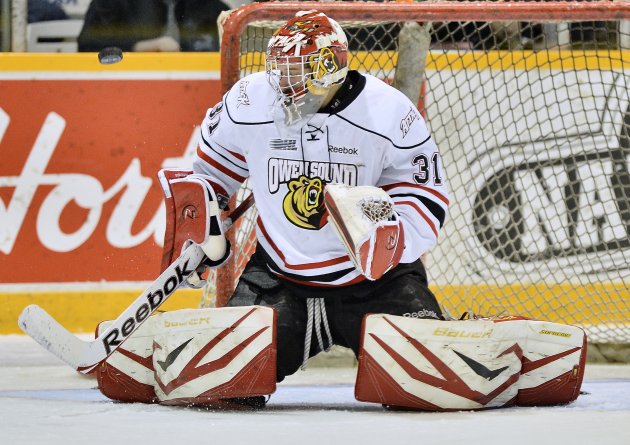 Toronto, ON – The Ontario Hockey League today announced that Jordan Binnington of the Owen Sound Attack is the 2012-13 recipient of the OHL’s Goaltender of the Year award.

Binnington set Attack single season records with 32 wins and seven shutout victories while posting a 32-12-1-5 record.  He produced the league’s second lowest goals-against-average at 2.17 and third best save percentage with a mark of .932.  His seven shutouts tied for a league-high and he helped the Attack earn their first Dave Pinkney Trophy for allowing a league-low 165 goals against.

“Receiving this award is something I am very proud of and will cherish forever,” Binnington said.  “It was a very exciting year for me on a number of levels and as a team we were such a strong hard-working group.  My teammates made my job easier and I need to thank them first and foremost.  The Attack organization is first class and the city of Owen Sound has been extremely supportive throughout my time here.  I couldn’t have asked for a better City to play in or a better group of fans to play in front of.”

A 19-year-old from Gravenhurst, ON, Binnington becomes just the second Owen Sound goaltender to win the award following Jamie Storr who earned the honour with the Platers in 1993-94.  Originally chosen by the Attack in the second round of the 2009 OHL Priority Selection, Binnington is also the franchise’s all-time wins leader with 86 and shutouts with nine in addition to his single season records.  A veteran of four seasons in Owen Sound, Binnington helped the Attack capture their first OHL Championship in 2011 and was later awarded Top Goaltender at the 2011 MasterCard Memorial Cup.  This season he earned Vaughn OHL Goaltender of the Month honours in both October and April along with Player of the Week honours after posting three consecutive shutout victories in November before representing the OHL on Canada’s National Junior Team.  Binnington is a St. Louis Blues prospect selected in the third round of the 2011 NHL Entry Draft.

“As an organization, we’re very proud of Jordan being named the Ontario Hockey League’s top goaltender,” said Attack General Manager Dale DeGray.  “Jordan is a fine young man and it has been a pleasure to watch him grow from a rookie goaltender who was drafted by our organization, into what he is today. He has made a tremendous contribution to our organization both on and off the ice during his time here and we cannot thank him enough for his dedication to the Attack organization.”

Binnington received 60 points in the voting process just ahead of John Gibson of the Kitchener Rangers who finished in second place with 57 voting points after finishing in third place for this award last season.  Malcolm Subban of the Belleville Bulls finished in third place in voting with 29 points.

The award was first presented in 1987-88 to Rick Tabaracci (Cornwall) with other notable winners including Andrew Raycroft (Kingston 1999-00), Ray Emery (Sault Ste. Marie 2001-02), and Mike Murphy of the Belleville Bulls who is the only goaltender to win the award twice in 2007-08 and 2008-09.  Michael Houser of the London Knights won the award last season.