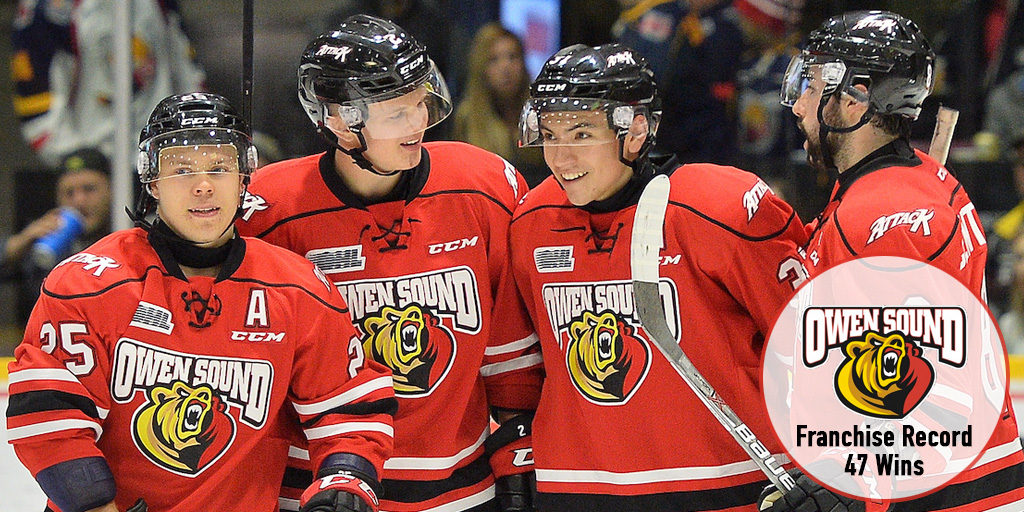 The Owen Sound Attack set a new all-time franchise record on Thursday, defeating the Windsor Spitfires 6-1 on the road to claim their 47th win of the season.

The Attack’s 98th point in the Western Conference standings is also a franchise mark as the Bears climbed within one point of the first place Erie Otters with two games remaining on their regular season schedule.

The Attack’s 47th victory of the season under head coach Ryan McGill surpasses the prior mark of 46 accumulated during the 2011 season under Mark Reeds as Owen Sound went on to win its first ever OHL Championship and compete in the Mastercard Memorial Cup that spring.

Owen Sound features a home record of 26-4-1-2 on the season and boasts the league’s top ranked power play at 27.1%. Other milestones achieved by the club this season include winning a franchise record 15 straight games from December 9th to January 15th. On an individual level, goaltender Michael McNiven has set a new single-season franchise mark for wins as well as an Attack career record for shutouts.

The Attack will round out their regular season schedule this weekend with a game at home to the Kitchener Rangers on Saturday before a matchup in Guelph on Sunday.