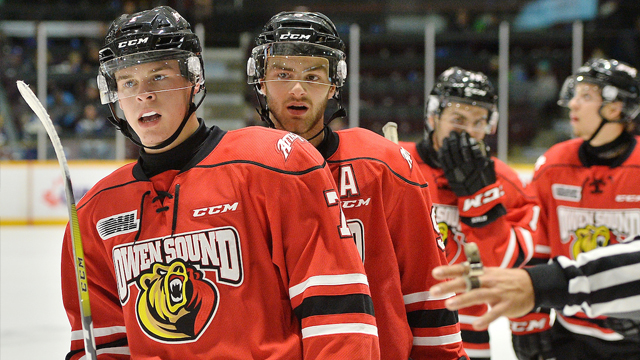 The Owen Sound Attack are as hot as they’ve ever been.

Kevin Hancock and Zachary Roberts each had a goal and two helpers in the historic win as the Attack climb to within two points of first place in a highly competitive Midwest Division.

Owen Sound’s historic run under head coach Ryan McGill that dates back to December 9th has featured nine of their 11 victories coming on home ice. The Attack haven’t surrendered more than two goals in any of those 11 wins thanks in large part to Montreal Canadiens prospect Michael McNiven, who with his 58th career win on Wednesday surpassed Jamie Storr (1991-95) for third on the franchise’s all-time list behind Jordan Binnington (86, 2009-13) and Curtis Sanford (65, 1996-2000).

In 1996-97, the Platers won 10 straight under head coach John Lovell from November 22nd to December 14th before seeing their run come to an end at the hands of Brian Kilrea’s Ottawa 67’s on December 15th.

Owen Sound played host to another 10-game run just under 10 years later when the Attack enjoyed a run of success under head coach Mike Stothers. Led by star forward Bobby Ryan, the Attack won 10 in a row from December 9th to January 8th. The eventual Mastercard Memorial Cup champion London Knights would halt Owen Sound’s winning streak on January 9th as Dylan Hunter scored the overtime winner in a 5-4 decision.

The Attack enter the back end of a home-and-home in Guelph on Friday sporting a record of 27-13-1-0 on the season, just two points behind first place London and Erie in the Midwest Division.