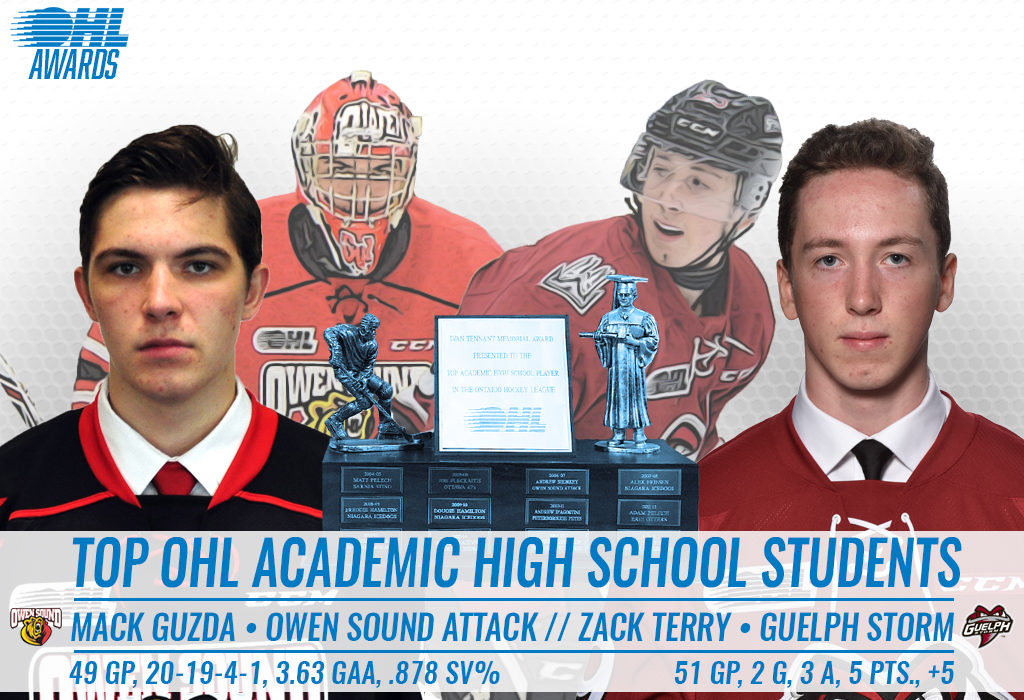 The Ontario Hockey League is proud to announce the 2018-19 co-recipients of the Ivan Tennant Memorial Award.

“It’s a huge honour to receive this award,” Terry said. “I’m very thankful to have been given the opportunity by Guelph to compete in the OHL and pursue my academics. I’m very fortunate for all the support from everyone in the Guelph Storm organization, and especially my family and academic advisor, Coleen Driscoll, for the endless energy and effort put into allowing me to achieve such a high degree in my academics. I can’t thank these people enough.”

This marks the first time since the award was introduced in 2005 where it has been co-presented and had a repeat winner with Guzda recognized for the second straight season.

“I am honoured to receive the Ivan Tennant Award from the OHL for the second year,” Guzda said. “I am grateful to the Owen Sound Attack organization, ownership and coaching staff as well as educational advisor Sarah Rowe, and to my family and billets. I am particularly appreciative of the OHL for allowing me to pursue my academic goals along with my athletic goals.”

An 18-year-old from Knoxville, Tennessee, Guzda made 49 appearances between-the-pipes for the Attack carrying an overall record of 20-19-4-1 with two shutouts, a goals-against-average of 3.63, and save percentage of .878.  The club’s second round pick in the 2017 OHL Priority Selection and member of the OHL’s First All-Rookie Team in 2018 is now eligible for the 2019 NHL Draft and is listed 25th among North American goaltenders in NHL Central Scouting’s final rankings.

“Mack is an incredibly bright young man who is an outstanding goaltender as well,” said Attack General Manager Dale DeGray. “The organization is committed to success on the ice and in the classroom, and Mack exemplifies what we are looking for in a student-athlete.”

A 17-year-old from Oakville, Ont., Terry played 51 games for the Storm scoring twice with three assists.  The second round pick in the 2018 OHL Priority Selection was one of just 11 OHL rearguards to represent Canada in the 2018 World Under-17 Hockey Challenge where he suited up for Team Black in November.  Last season he enjoyed an offensive minded season leading the OMHA’s SCTA division in scoring from the back end with 43 points in 35 games for the Oakville Rangers.

“Through the years there have been many highly dedicated and committed student athletes in the Ontario Hockey League. In my experience, there has been no one more diligent and determined to succeed in the classroom than Zack,” said Storm General Manager and Head Coach George Burnett. “He is most deserving of this very prestigious recognition. The Guelph Storm are very proud of Zack’s outstanding work throughout his first season, both on and off the ice. Congratulations, Zack!”

The Ivan Tennant Memorial Award is given to the Top Academic High School Player and is named in honour of Ivan Tennant, who spent a lifetime combining hockey and education.  He was the Kitchener Rangers’ Education Consultant for 20 years and a key figure on the OHL’s Education Consultant’s Committee.  Andrew Shorkey (2007) is the only other member of the Attack to win the award while the Storm have been represented previously by Adam Craievich (2014) and Quinn Hanna (2017).  Past recipients also include brothers Matt and Adam Pelech (Sarnia 2005 and Erie 2012), Freddie and Dougie Hamilton (Niagara 2009 and 2010), and recent winners Stephen Dhillon (Niagara 2015) and Kyle Keyser (Flint 2016).

Finalists for the award included Jake Murray of the Kingston Frontenacs, Mitchell Russell of the North Bay Battalion, Tye Austin of the Peterborough Petes, and Cole Perfetti of the Saginaw Spirit.