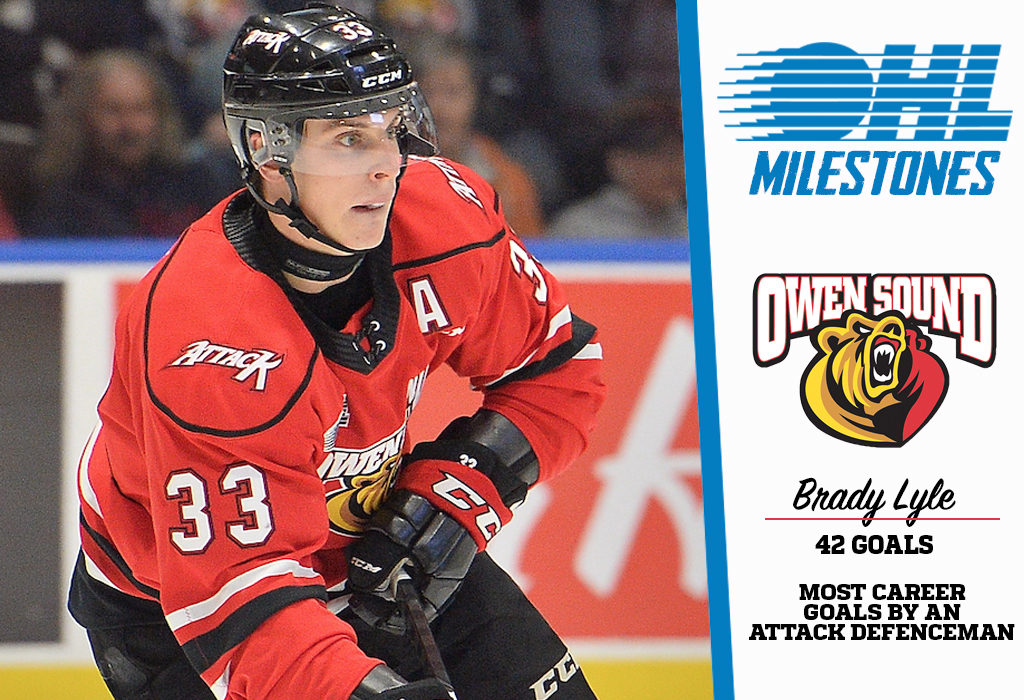 Overage defenceman Brady Lyle scored 58 seconds into action on Wednesday in Flint, burying the Attack’s first shot of the game to become the franchise’s all-time leader in career goals by a defenceman.

Lyle surpassed Bobby Sanguinetti (2004-07) with his 42nd career tally in an Attack uniform as the Bears defeated the Flint Firebirds 5-2 to inch closer to claiming a playoff spot in the Western Conference.

With his goal in the 1st period tonight, Brady Lyle passed Bobby Sanguinetti for 1st All Time in most goals by an Attack Defenseman with 42!

Lyle sits third among OHL defenders in points this season, recording 22 goals and 42 assists for 64 points to go with a plus-30 rating over 59 games. The fifth-year blueliner has accumulated 49 goals, 125 assists and 174 points over five seasons spent between the Attack and the North Bay Battalion.

A 6-foot-3, 210Ib. product of North Bay, Lyle was chosen by the Battalion with the 18th overall pick of the 2015 OHL Priority Selection, spending parts of three seasons in green before joining the Attack in October 2017. He attended training camp with the Arizona Coyotes last September.

Lyle currently sits one goal back of tying the Owen Sound mark for goals by a defenceman in a single season, a benchmark currently held by both Sanguinetti (2006-07) and Scott Walker (1992-93).

The 29-22-4-4 Attack are back in action on Thursday when they visit the Windsor Spitfires.