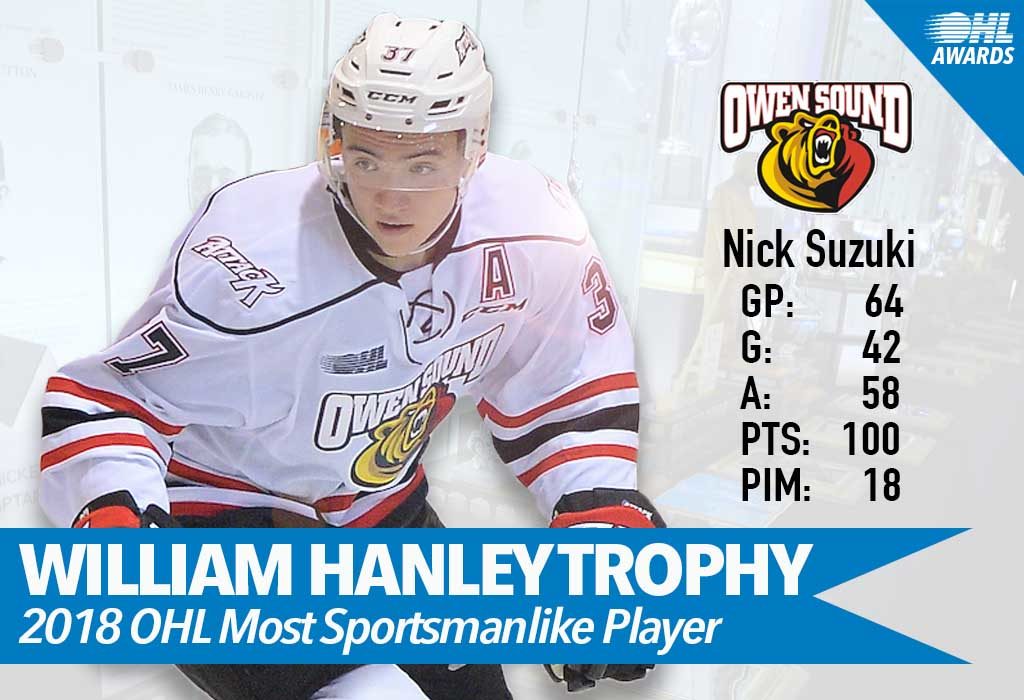 Toronto, ON – The Ontario Hockey League today announced that Vegas Golden Knights prospect Nick Suzuki of the Owen Sound Attack is the 2017-18 recipient of the William Hanley Trophy awarded to the OHL’s Most Sportsmanlike Player of the Year.

Suzuki earns the award a second straight season after finishing fourth in league scoring with 100 points including 42 goals and 58 assists along with a plus-minus rating of plus-30 in 64 games.  He recorded just 18 penalty minutes in 2017-18 which was tied for second fewest among the league’s top-10 scorers incurring just three minor penalties during his final 38 games of the regular season.  Now the fourth player in league history to win the award in back-to-back years, Suzuki became the first ever Owen Sound player to receive the award last season and went on to claim CHL Sportsman of the Year honours.

“It’s an honour to win this award for the second year in a row,” Suzuki said. “I couldn’t do it without the support of my teammates, coaches, and family.”

An 18-year-old from London, Ont, Suzuki was chosen by the Golden Knights with the 13th overall pick in the 2017 NHL Draft.  He returned to the Bayshore and became the franchise’s fifth member since 1989 to reach the century mark for points in a season and first since Bobby Ryan in 2006-07.  He also became the club’s first back-to-back 40-goal scorer since Wes Goldie during the 1999 and 2000 seasons.  He recorded 28 multi-point performances and was recognized in the annual Western Conference Coaches Poll where he was voted third Best Playmaker, third Best Stickhandler, and tied for second Best Shot.  Suzuki joined the Attack as the 14th overall pick in the 2015 OHL Priority Selection and in three years has accumulated 234 career points in 192 games.

“For any player to win an OHL award two years in a row is extremely impressive,” said Attack General Manager Dale DeGray. “The entire organization couldn’t be prouder of Nick and what he’s been able to accomplish in his three years in the league. Earning the William Hanley Trophy again just shows how Nick approaches the game, his dedication to playing the right way, and his integrity as a player.”

Suzuki will be formally presented with the William Hanley Trophy at the 2017-18 OHL Awards Ceremony set for Wednesday June 6 at the Hockey Hall of Fame in Toronto.  He will again be the OHL’s nominee for Sportsman of the Year at the annual CHL Awards held as part of the Mastercard Memorial Cup festivities on Saturday May 26 in Regina.