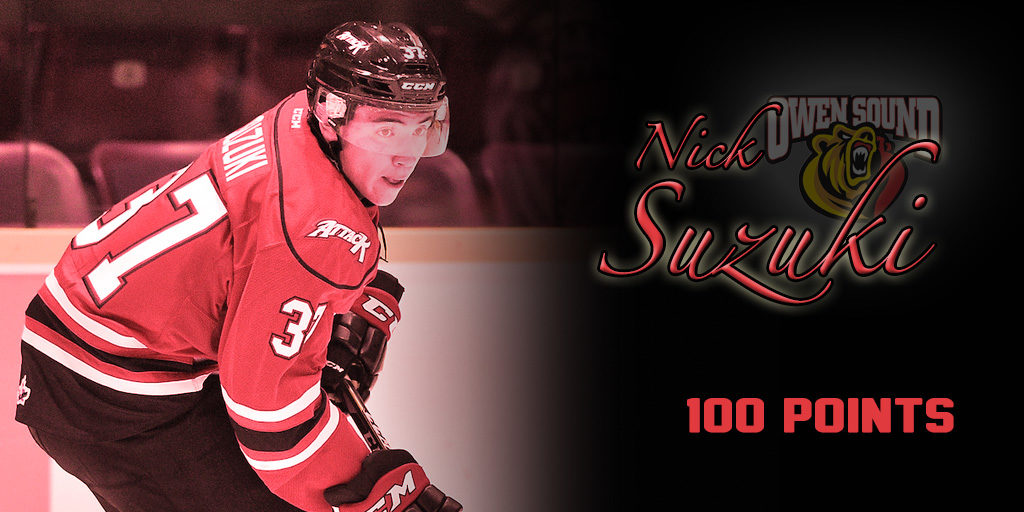 Vegas Golden Knights prospect Nick Suzuki of the Owen Sound Attack is the newest member of the OHL’s century club, recording two goals and an assist to reach 100 points (42-58–100) on the campaign Saturday night in Owen Sound.

The Attack defeated the visiting Sarnia Sting 9-4 to wrap up their regular season schedule with an overall record of 38-22-3-5.

With his 42 goals, Suzuki is the first Attack player to record back-to-back 40 goal seasons since Wes Goldie last accomplished the feat during the 1999 & 2000 seasons.

The 18-year-old from London, Ont. was the recipient of the William Hanley Trophy last season, awarded to the OHL’s Most Sportsmanlike Player as he posted just 10 penalty minutes in 65 games.

Suzuki continues to climb the Attack franchise leaderboards with his 107 goals, 127 assists and 234 points over 192 regular season games after being Owen Sound’s first round (14th overall) pick in the 2015 OHL Priority Selection.

Have yourself a year, kid.