Colts preparing and donating meals to community in need 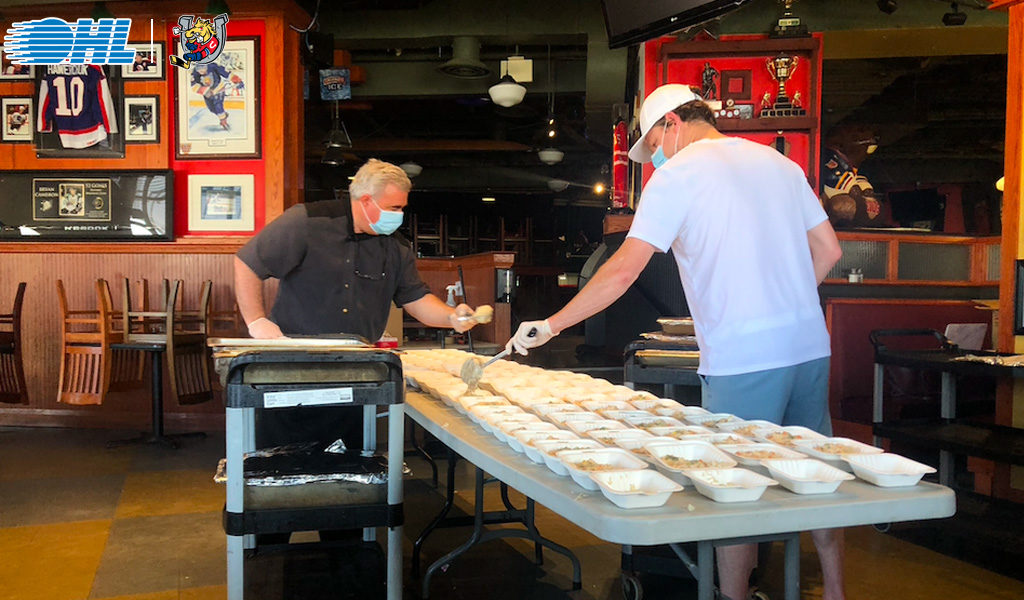 The Barrie Colts organization has been hard at work helping those in need.

With the COVID-19 pandemic came many unforeseen safety challenges for local organizations. A number of those challenges included disruptions to regular meal preparation and serving methods within shelters.

With extra time and resources on hand, the Colts came up with the idea to prepare meal donations for local organizations in need. The process has been supported through the Barrie Colts Community Foundation with funds raised through its 50/50 draws and other initiatives. The club approached the City of Barrie with the idea during the third week of March, and when the city expressed that they needed help, the idea took off.

With the OHL season having come to an abrupt end, it’s been a good way to keep staff busy as well. It’s been a team effort that has spanned help from across the organization including from bookkeeping staff, clerical staff, training staff members Jimmy McKnight and Clayton Johns, as well as General Manager Jason Ford, among others. The team’s Food and Beverage Manager Sean Kehoe has been cooking the meals in mass quantities with the help of some extra staff.

Barrie Colts President and Owner Howie Campbell expressed how impressed he was at everyone’s desire to help out.

“It’s been a real good company effort and on the days where there was nothing else going on it was kind of fun to get out of the house for a day just to do a little packaging and have a place to go,” said Campbell, who, along with his kids, has also helped package meals.

He also has had some positive words for the quality of Kehoe’s meals.

“[Kehoe] took the challenge on right away and has cooked up some really great meals,” he said. “Some of the stuff he’s cooking up we’re actually going to add to our menu for next season.”

The team has been able to arrange for the preparation and packaging of the meals while following proper social distancing guidelines, only allowing three staff members in the kitchen and three in the packaging area at a time.

“We’ve been going pretty steady with about six or seven people a day cooking and packaging the meals and getting them ready to go,” explained Campbell.

They’ve also received donations from other local organizations and sponsors including No Frills, Zehrs Supermarkets and Scotiabank. There’s no hard end date in sight for the community initiative, which is now in its 12th week, and Campbell once again praised the Colts family for all their ongoing help in these tough times.

“I never thought we’d be at the point where we serve 30,000 meals,” he said. “They’ve been really well received and the community has obviously been looking for some help so it’s been a great team effort with our staff, employees and everyone pitching it wherever they can to make it all work.”