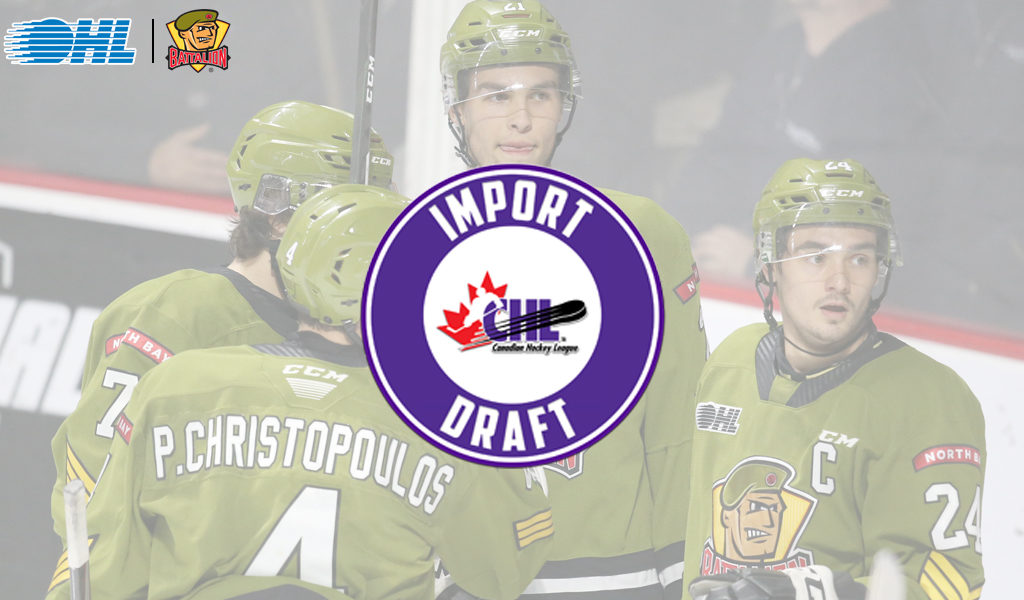 “I think when you pick first overall and have the ability to bring in a high end European player, that’s definitely the goal,” he said.

Following a 17-41-4-0 finish that landed them at the bottom of the OHL standings over the 2019-20 season, the Troops are hungry to regain their identity of being a difficult team to face off against – something they feel they began to accomplish with a 6-3-1-0 record over their final 10 games.

With that in mind, the emphasis has been on drafting players with a high compete level. They welcomed 16-year-old defenceman Ty Nelson of the GTHL champion Toronto Jr. Canadiens with the first overall selection at the 2020 OHL Priority Selection and went with forward Kevin Henstock of the OMHA’s Oakville Rangers first overall at the subsequent Under-18 Priority Selection.

Looking ahead to the upcoming Import Draft, the Troops are looking to add skill and game-breaking ability to compliment the developing young core that includes the likes of Liam Arnsby, twin brothers Alex and Paul Christopoulos and 6-foot-6 goaltender Joe Vrbetic alongside a crop of newly committed prospects in Nelson, elite forward Dalyn Wakely and mobile defenceman Tnias Mathurin.

“You want an impact right away and somebody that is going to add to your culture and obviously have all those things you would expect in a first overall pick,” Dennis said.

Along with the expectations both on and off the ice that come with a high end selection, Dennis also acknowledges there may be an adjustment period for the player as well.

“I think there’s a lot of uncertainty just based on the players are coming from a different style of play, so a lot has to go into how they’re going to adapt to the new surroundings,” he said.

“We take for granted sometimes that they are young kids and for most of them, English is their second language as well.”

But it’s a transition he confidently feels the team will accommodate well.

“Hopefully we can make that transition easier and help them help us,” Dennis finished. “We’re really excited to make the selection and looking forward to seeing what the player can bring.”

The CHL Import Draft takes place on June 30 at 11:00 am. For more information visit chl.ca.