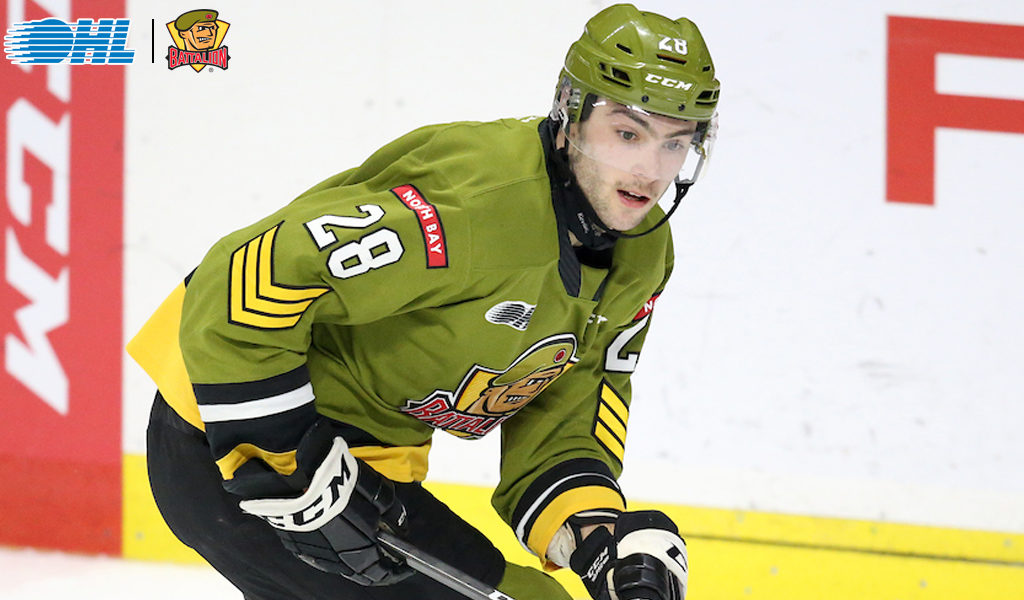 “I’m really honoured to be given the opportunity to captain this team,” said Moncada.

“The last two captains, Justin Brazeau and Brad Chenier, are really good friends of mine, so I’m hoping to follow in their footsteps and lead the right way. Hopefully, we can have a better second half.”

North Bay acquired him in a trade June 27, 2017, making him the first captain to have played previously for another OHL club since Jason Maleyko, who wore the ‘C’ in the Battalion’s first three seasons. Maleyko was selected from the Oshawa Generals in the 1998 Expansion Draft after having made his OHL debut with the Windsor Spitfires.

“Luke has been the ultimate teammate since the minute he came in as a 17-year-old,” said general manager Adam Dennis. “He’s grown into this role and has probably been the most improved player in the league.

“We look forward to him leading this team into the future.”

Moncada, a Toronto resident, was a third-round pick by Guelph in the 2016 OHL Priority Selection from the Toronto Red Wings minor midgets. The Battalion acquired him with forward Luke Burghardt for forward Zach Poirier and defenceman Mark Shoemaker.

Left winger Chenier was sent to the Sudbury Wolves for fellow overager Shane Bulitka, a centre, and two picks in the OHL Priority Selection, a third-round choice in 2023 and a conditional eighth-rounder in 2022.

Chenier is the second Battalion captain to be traded, after Ryan Bowness. He was dealt to Oshawa during the 2003-04 season and succeeded by Chris Clayton.