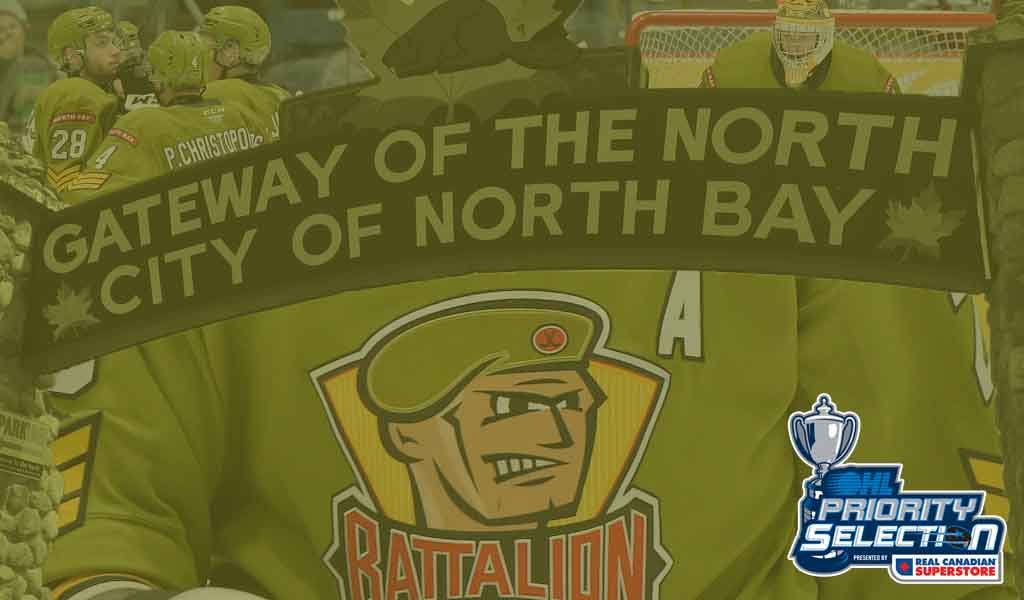 The North Bay Battalion are looking to hit the ground running next year, and it all starts with selecting first overall in this year’s OHL Priority Selection presented by Real Canadian Superstore – an opportunity they haven’t had since the franchise’s inaugural year in 1998.

Following their spot at the bottom of the league standings this past season with a 17-41-4-0 record, general manager Adam Dennis and director of scouting Charles Abbott are seeking a player who will make an impact alongside some of the gains they added last season. They’ve been looking for more than just skill; that’s a given. They want compete.

“We really want to have a team identity of being a difficult team to play and making sure that opposing teams coming to visit us in North Bay know they’re going to be in for a really tough game,” said Dennis. “I think that’s at the forefront of us. We want competitive people.”

The rebuilding process began last season, and this year’s plan is to take a step forward and build around what’s been working. Players like Liam Arnsby and Alex and Paul Christopoulos were able to step into bigger roles earlier than planned, getting some valuable experience on the power play and penalty kill. They have a young defensive core, but it remains an area they’re trying to establish. The departure of overager Shane Bulitka will leave the Troops with a void in the left shot forward department.

“Obviously when you have the season that we did, there are a lot of needs, so the most important type of person is someone that can compliment the ’03 group we’ve already started to build behind.”

For much of the season, their spot at the bottom of the Eastern Conference separated them by a significant point margin. As the season concluded, they sat only three points out of a playoff spot. The final stretch of their campaign had them trending in the right direction with nods to captain Luke Moncada, NHL Draft eligible Brandon Coe and rookie netminder Joe Vrbetic . They finished with a 6-3-1-0 record over their final 10 games.

“We felt that we had a chance to make the playoffs for so many reasons,” said Dennis. “There are a lot of exciting things about North Bay and we really expect to build on that and add to the momentum that our team has already had.”

Looking ahead to expectations for next season, Dennis has a good idea of where he wants the Troops to be.

“We’re not looking to go through those growing pains as much as we were this [past] year,” he said. “We’re looking for guys to have that experience and I really do think they gained it over the course of the season.”

The Battalion are expected to announce the player they’ll be selecting with their first overall pick on Friday afternoon.