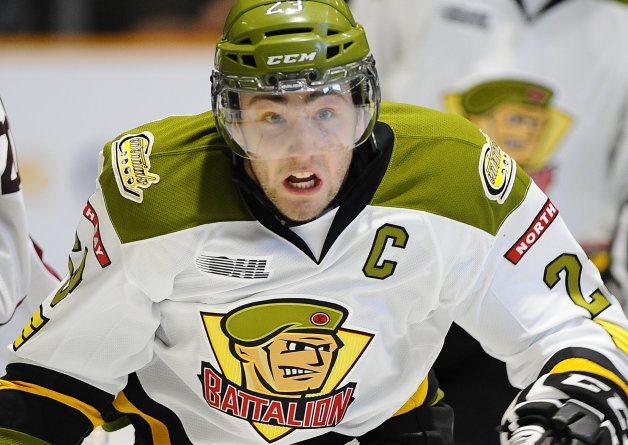 Toronto, ON – The Ontario Hockey League today announced that San Jose Sharks prospect Barclay Goodrow of the North Bay Battalion is the OHL Player of the Week for the playoff week ending April 20 after scoring three goals with two assists for five points in two games with a plus-minus rating of plus-5.

Goodrow led the Battalion to a pair of road victories over the Oshawa Generals on the weekend to take a 2-0 series lead in the Rogers Eastern Conference Championship Series for the Bobby Orr Trophy.  On Sunday night in Game 2, Goodrow scored his second hat-trick of the season and tallied an assist in the Troops’ 5-2 win.  The captain opened the scoring just 90 seconds into the game, then scored a shorthanded marker late in the second period, and rounded out his scoring with an empty-net goal in the final minute of play to earn first star honours.  In Game 1 of the series on Friday, the overage forward assisted on the only goal of the contest scored by Nick Paul at 15:40 of the third period to give the Battalion the 1-0 victory.  The series continues Tuesday and Wednesday night in North Bay.

Goodrow, a 21-year-old from Aurora, ON, is playing in his fifth and final OHL season with the Battalion.  Originally selected by the Troops in the first round of the 2009 OHL Priority Selection, Goodrow is the franchise leader in games played with 313.  Signed as a Free Agent by the Sharks to an entry-level contract, Goodrow recorded a career-high 67 points in 63 games this season and is currently tied for second in OHL playoff scoring with 17 points including nine goals and eight assists in 15 games.

Watch highlights of Goodrow and the Battalion against the Generals in Game 1 and Game 2.

Also considered for the award this week was Winnipeg Jets prospect Scott Kosmachuk of the Guelph Storm who scored twice with three assists for five points in two games of the Rogers Western Conference Championship Series against the Erie Otters, and Columbus Blue Jackets prospect Kerby Rychel who scored three goals with one assist for four points in two Storm wins.  In goal, the Battalion’s Jake Smith earned two wins in two starts including a shutout victory posting a goals-against-average of 1.00 and save percentage of .957.