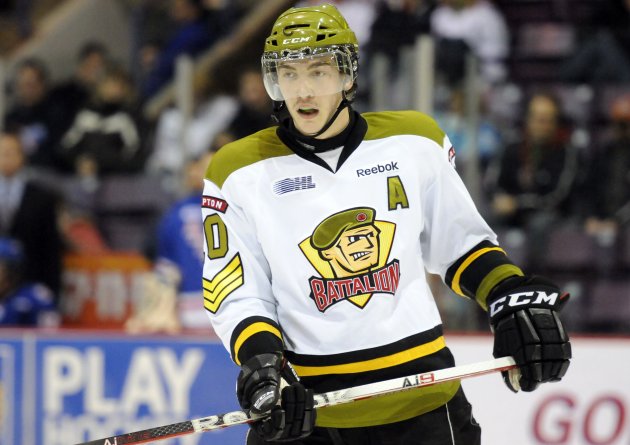 Toronto, ON – The Ontario Hockey League today announced that Brampton Battalion forward Philip Lane is the OHL Player of the Week for the week ending December 11 after recording seven points in three games including a goal and six assists with a plus-minus rating of plus-6.

Lane led the Battalion to three straight wins beginning with a career-high four-assist game on the road Friday night as part of a 7-4 win over the Kingston Frontenacs where he was named first star of the game.  He also added two assists on Saturday in a 4-1 win over the Barrie Colts before scoring his third shorthanded goal of the season on Sunday in a 5-2 win over the visiting Frontenacs.  The Battalion have now matched a season-high with four straight wins and are tied for first with 40 points in the OHL’s Eastern Conference with the Ottawa 67’s.

Lane, a 19-year-old from Rochester, New York, is playing in his third OHL season with the Battalion.  The second round choice of the Phoenix Coyotes in the 2010 NHL Entry Draft leads his club in scoring with 10 goals and 16 assists for 26 points in 32 games.

Also considered for the award this week was Seth Griffith of the London Knights and Carson Dubchak of the Sault Ste. Marie Greyhounds.  Griffith scored five goals and one assist for six points in three games, while Dubchak had four goals and two assists for six points in three games.  In goal, Joel Vienneau of the Sudbury Wolves received consideration for the second straight week with a 1-1-0-0 record posting a goals-against-average of 1.00 and save percentage of .968