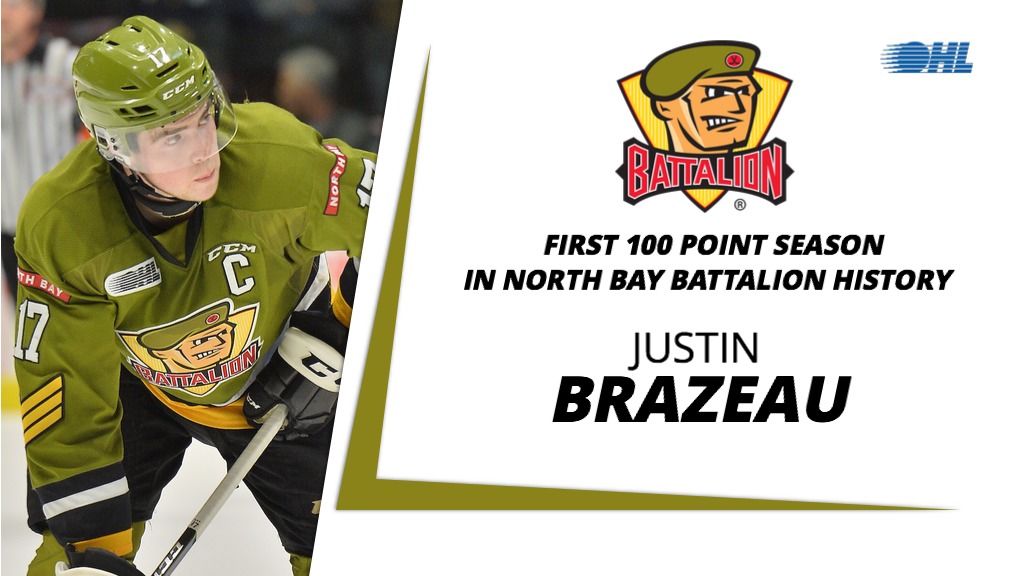 North Bay Battalion captain Justin Brazeau blasted past the 100-point mark on Sunday, recording a goal and two assists in a 6-5 loss to the visiting Peterborough Petes.

Currently trying to lock down one of two remaining playoff spots in the Eastern Conference, the Troops came up short on Sunday but the overage winger became the OHL’s seventh 100-point scorer of the 2018-19 season, doing so in his 64th game of the season. He has a franchise record 55 goals along with 47 assists for 102 points on the campaign.

Brazeau records the first 100-point season by a Battalion player since the franchise moved to North Bay in 2013 and gives the Troops a scorer beyond the century mark for the first time since Wojtek Wolski‘s 128-point campaign in 2005-06. Brazeau is North Bay’s first 100-point OHL scorer since Trevor Gallant of the Centennials put up 105 points in 1995-96.

A 21-year-old from New Liskeard, Ont., Brazeau surpassed Mike Amadio for fourth on the Battalion’s all-time points list, pushing his career production to 227 points (122-105–227). His 264th career regular season contest pushes him ahead of Amadio for eighth in Battalion franchise history.

Originally a 13th round pick from the New Liskeard Cubs Midget AAA team in 2014, Brazeau remains without an NHL contract but attended rookie camp with the San Jose Sharks last September.