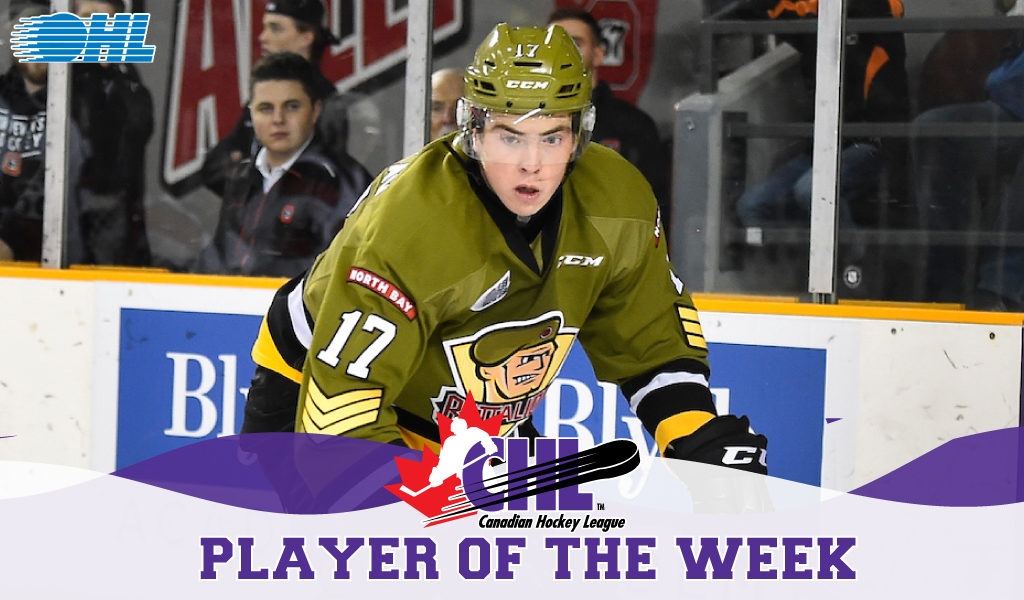 Toronto, ON – The Canadian Hockey League today announced that Justin Brazeau of the North Bay Battalion is the CHL Player of the Week for the regular season week ending October 21 after recording nine points in two games including four goals and five assists with a plus-minus rating of plus-3.

Brazeau produced a pair of multi-point performances highlighted by a Battalion record-tying output to take over the lead in the OHL’s scoring race.  He scored a goal and an assist on Thursday earning second star honours despite a 4-3 loss to the Mississauga Steelheads, then scored a hat-trick with four assists on Sunday as first star of an 8-3 win over the Kingston Frontenacs.  The hat-trick was his second of the season, scored entirely in the first period, while the seven points match the club’s all-time best set by Wojtek Wolski back in 2006.

A 20-year-old from New Liskeard, Ont., Brazeau is playing in his fourth season with the Battalion who chose him in the 13th round of the 2014 OHL Priority Selection.  His league-best 25 points in 12 games includes 12 goals and 13 assists bringing him a third of the way towards his career-high 75 points recorded in 68 games last season.  The overage forward was named team captain prior to the 2018-19 season after attending San Jose Sharks Training Camp as a Free Agent invite.