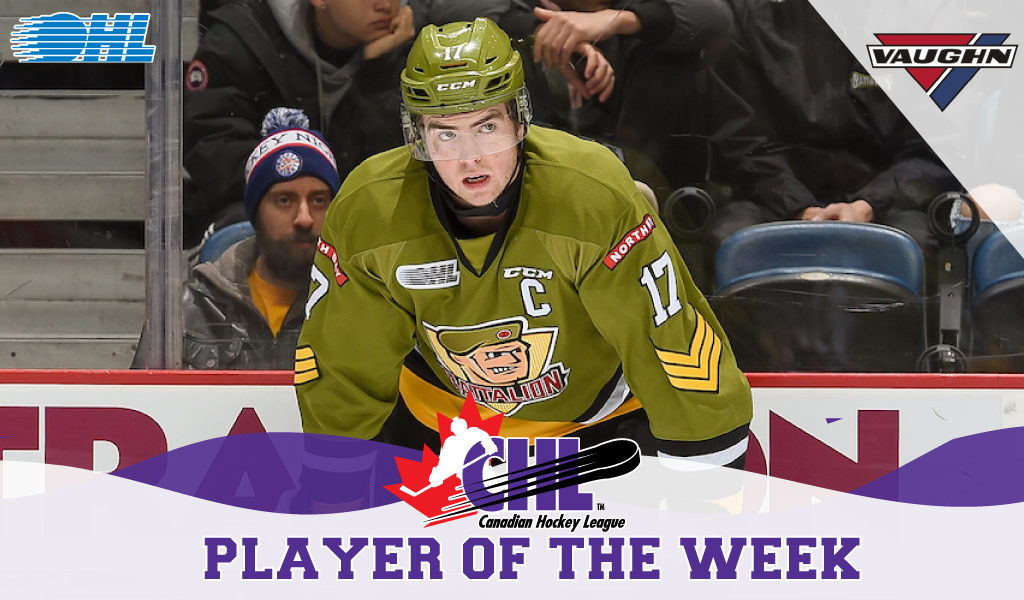 Toronto, ON – The Canadian Hockey League today announced that OHL top scorer Justin Brazeau of the North Bay Battalion is the CHL Player of the Week for the regular season week ending December 16 scoring eight goals and two assists for 10 points in three games with a plus-minus rating of plus-7.

Brazeau wins the award for the second time this season powered by a trio of multi-goal performances that helped the Battalion finish the first half with three-straight wins.  On Thursday night he scored twice with one assist and earned first star honours in an 8-5 victory on home ice over the Kitchener Rangers.  He did the same three-point damage on Saturday while visiting the Barrie Colts where his first goal held as the game-winner and his second the insurance marker receiving second star accolades in the 4-1 triumph.  Brazeau brought his best effort right before the holiday break in a rematch against the Colts scoring a career-high four goals including the Teddy Bear Toss tally at home receiving first star honours in the 5-4 decision.  The Troops will be fighting for playoff positioning in the second half carrying a 14-18-1-1 record in the competitive OHL Eastern Conference standings.

A 20-year-old from New Liskeard, Ont., Brazeau is playing in his fourth career season with the Battalion who chose him in the 13th round of the 2014 OHL Priority Selection.  Through 34 games he’s scored 34 goals along with 29 assists for an OHL-best 63 points.  During Sunday’s game he eclipsed the century mark for career goals and now has 101 with 87 assists for 188 points in 234 games.

Also considered for the award this week was Nicolas Guay of the Drummondville Voltigeurs who scored six goals and two assists for eight points in three games, and Dante Hannoun of the Victoria Royals who scored three goals and six assists for nine points in four games.