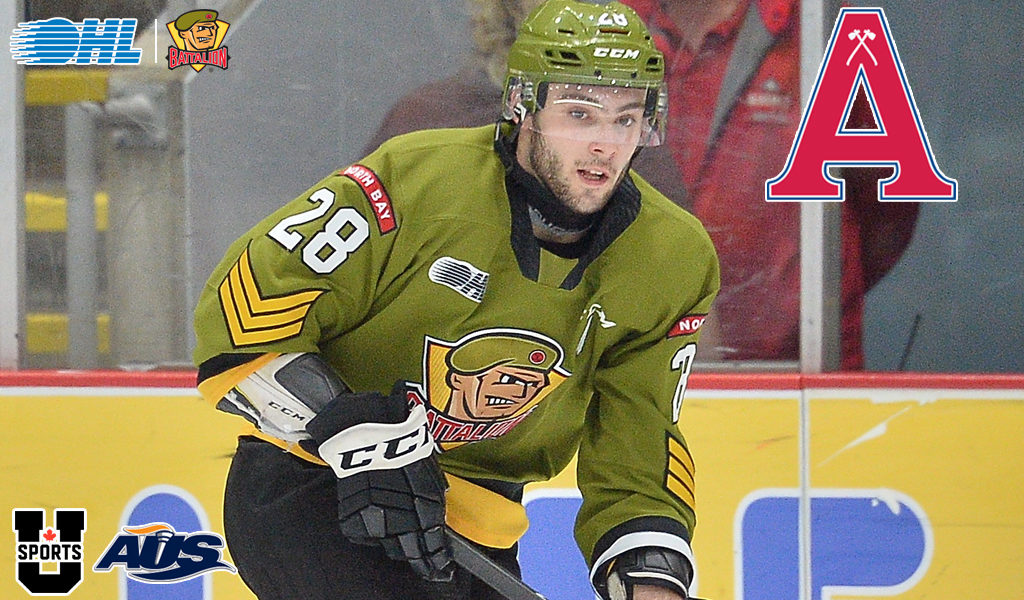 The Acadia Axemen have announced that overage North Bay Battalion captain Luke Moncada has committed to the men’s hockey program for the upcoming 2021-22 season.

Moncada, 21, split a four-year OHL career between the Guelph Storm and the Battalion. A third round draft pick of the Storm in the 2016 OHL Priority Selection, the Toronto-born forward played his rookie campaign in Guelph before heading to North Bay for the next three seasons. Moncada put up 106 points (51-55—106) in 234 appearances with explosive career highs in goals (34), assists (26) and points (60) over the 2019-20 season, during which he was appointed the captaincy.

With the 2020-21 OHL season cancelled due to the COVID-19 pandemic, Moncada suited up with the AHL’s Cleveland Monsters where he finished with 3 points (1-2–3) and a plus-5 rating over 17 games.

“Through conversations with Darren Burns and Kris Mcdonald alongside speaking with current and former Acadia players, it was clear that Acadia offered me the best opportunity to further both my education and hockey career. Between the on and off ice training regiment at Acadia and the highly competitive AUS conference, it was clear that Acadia was the best fit for me,” Moncada said. “Axemen fans can expect to see a responsible 200 ft centremen that impacts the game on both ends of the ice. A player with a lot of passion and heart and will do anything to help my team win.”

Moncada will be joined out east by former Peterborough Petes and fellow OHL graduates Keegan Stevenson and Hudson Wilson.

🅰️📢The Acadia Axemen are proud to welcome forward Luke Moncada to the program. After 4 years of junior in the OHL, Luke played last year in the AHL with the Cleveland Monsters.

🏒Read more about Luke & how he describes his game, & hear from Coach Burns:https://t.co/vtEi7Wldr3 pic.twitter.com/Mgd1xDp4g8