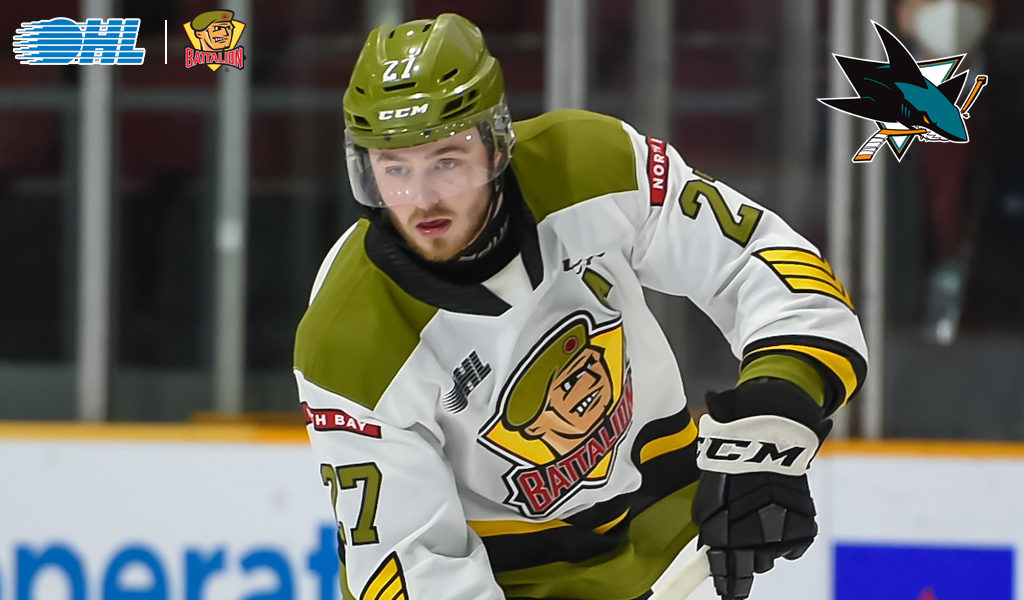 SAN JOSE, CA – San Jose Sharks Interim General Manager Joe Will announced today that the club has agreed to terms with forward Mitchell Russell to a standard, entry-level contract. Per club policy, terms of the deal were not disclosed.

“Mitchell is a character player and leader on the ice with good production that helps his team win,” said Will. “He has a strong pedigree as a skater who was selected in the first round of the OHL Draft.”

Russell, 21, leads the Ontario Hockey League (OHL) in playoff goals and ranks second with 22 points (11 goals, 11 assists) through nine games for the North Bay Battalion, where he is joined by fellow Sharks prospect Brandon Coe. He also ranks in the top five this postseason in assists (tied-fourth), power-play goals (four, tied-second), power-play points (seven, tied-second) and game-winning goals (four, second). He has recorded at least two points in all nine of his playoff games to date, and his nine-game postseason point streak is the longest active streak in the OHL. The Battalion are set to face the Hamilton Bulldogs in the Eastern Conference Final with Game One tomorrow in Hamilton.

In the regular season, Russell finished 10th in league scoring with 88 points (41 goals, 47 assists) in 64 games. He led all team skaters in goals, plus-minus (plus-33, tied for first with Coe), power-play goals (13), short-handed goals (three) and shots (241). The forward set new career highs in every offensive category and he was one of 15 skaters leaguewide to eclipse the 40-goal mark.

Across four seasons in the OHL, Russell has registered 161 points (78 goals, 83 assists) in 239 career regular season games with the Owen Sound Attack and North Bay. He has 24 points (12 goals, 12 assists) in 25 career playoff games. Internationally, he played in six games for Canada Red at the 2017 World U-17 Hockey Challenge, collecting two points (one goal, one assist) and helping them to a second-place finish.

The six-foot, 193-pound forward is a native of Barrie, Ontario. He was selected in the first round, 20th overall in the 2017 OHL Priority Selection by Owen Sound.