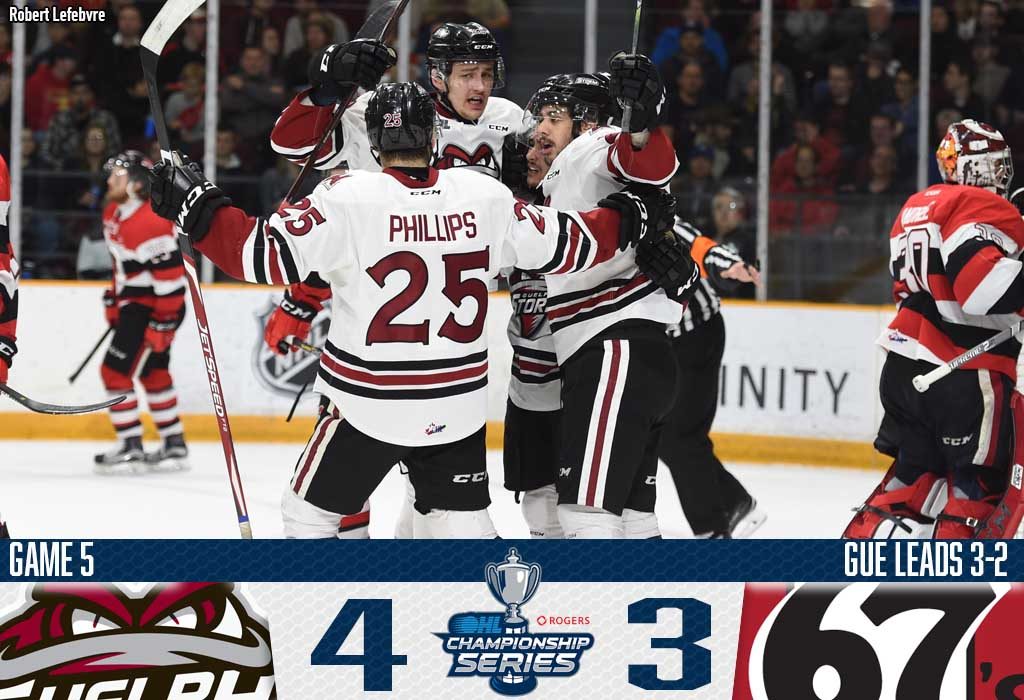 Ottawa, ON – The Guelph Storm erased a 2-0 series deficit, but knew they’d have to win a game in Ottawa to hoist the J. Ross Robertson Cup as OHL champions.

After surrendering the first goal in a second straight game the Storm came swirling back as Cedric Ralph (3) and Isaac Ratcliffe (13) scored 13 seconds apart to put Guelph in the lead for good in an eventual 4-3 Game 5 win.

“I liked the way our guys responded after a tough first goal against,” said Storm head coach George Burnett. “We got through some tough times in the game tonight. It was a little bit greasy but we’re going to take it and enjoy it for a few minutes.  We certainly have to be a better club on Sunday afternoon.”

Anthony Popovich was up to the challenge in the third period, helping the Storm fend off a desperate Ottawa attack being outshot 13-5 before making it to the final buzzer with the win intact.

“We haven’t won anything yet, but it’s nice to get this win here,” said Storm winger MacKenzie Entwistle. “I know the arena is going to be rocking on Sunday. The fans in Guelph have been behind us all year and for them to hopefully see us close a series out for the first time it’s going to be exciting.

“We haven’t won anything yet though and we’re looking forward to getting back home.”

Ottawa’s Tye Felhaber (16, 17) gave the 8,855 in attendance something to get excited about midway through the first period, sending a wrister past a screened Popovich with an assist from Marco Rossi.

The lead didn’t hold long though as Guelph’s Ralph battled his way into a favourable position in the slot before sliding a puck through the legs of Cedrick Andree at 12:44.

Ratcliffe put the Storm in front 2-1 a shift later, sending a puck goalward that banked off the skate of an Ottawa defender and past Andree to take the buzz out of the building.

After outshooting Ottawa 15-7 in the opening frame the Storm kept their foot on the gas early in the second as the red hot Alexey Toropchenko (13) scored in a fourth straight contest. The tenacious Russian winger made the most out of MacKenzie Entwistle’s centering feed from down the left wing, one-timing a low shot under the pad of Andree to give Guelph a 3-1 edge.

San Jose Sharks prospect Sasha Chmelevski (11) answered back for Ottawa, striking just as a 67’s power play expired at 6:33. The 19-year-old demonstrated some slick puck skills, kicking a Marco Rossi feed up from in his skates up onto his stick before outwaiting Popovich on the forehand to make it 3-2.

Popovich did his part to keep the Storm in the lead beyond the midway point of the second, turning away Mitchell Hoelscher on a pair of point blank chances before Nate Schnarr reinstated Guelph’s two-goal cushion. Schnarr beat his check down the middle off the rush, taking a feed from Liam Hawel before tapping it past Andree at 12:39.

Ottawa pressed hard in the third as Felhaber scored his second of the night and league-leading 17th of the playoffs coming off the bench. The overage winger followed up on his own rebound, stepping into a heavy drive that made its way past Popovich with 8:34 remaining.

The 67’s put in a solid third period but ultimately came up short and after an OHL record 14 consecutive wins have lost three straight.

“We played desperate hockey in the third because we’re down,” said Felhaber post-game. “We’ve got to make a decision right away to play that desperation mode right from the get-go. We need to do that on Sunday and play with that desperation for a full sixty.

“There’s no quit in our locker room,” he added. “The boys believe that and I think you’ll see it in Game 6 and 7.”

Ottawa outshot Guelph 31-29 as Popovich turned aside 28 shots for the win. Cedrick Andree made 25 saves in defeat for the 67’s.

The loss marks Ottawa’s first on home ice in the 2019 OHL Playoffs and is just the club’s fourth in regulation at Landsdowne Park all season.

The Storm can capture their fourth OHL Championship with a win in Sunday’s Game 6 that gets underway from the Sleeman Centre at 2:00pm.