Bleeding Blue: Mascherin and Bunnaman reflect on their four year road as Rangers 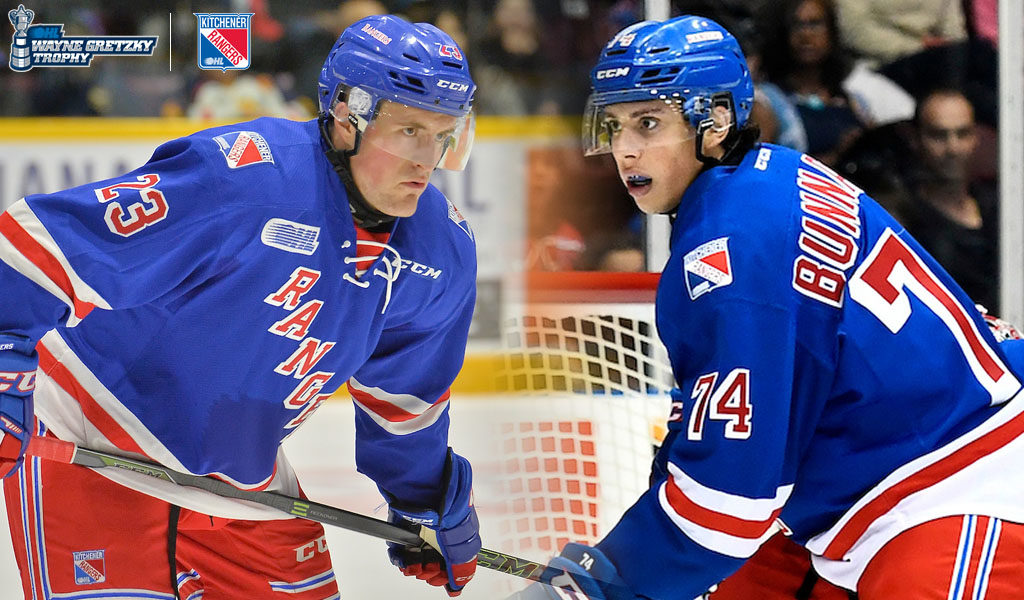 The Western Conference Championship Series returns to the Kitchener Memorial Auditorium for the first time since 2012, and once again it’s an exciting time to be a Rangers fan.

There’s no doubt ‘The Aud’ will be rocking Monday night when the puck drops for Game 3 against the Sault Ste. Marie Greyhounds and while the home team will be feeding off the energy, it’ll be extra special for a pair of fourth year blueshirts.

Adam Mascherin and Connor Bunnaman are the longest serving Rangers.

The club’s top two picks in the 2014 OHL Priority Selection have been impact players since day one, and now more than ever are key components of a team that has been building towards this moment.

“It’s nice, myself and Connor are the only two guys that have been here the whole way from that (2014) team,” Mascherin said. “When you’re in the same place for four years and you don’t get that taste of being close, there’s a lot riding on our shoulders because we want to win so bad, but going through so many ups and downs makes this that much more worth it and hopefully we can go out with a bang.”

Mascherin was the second overall pick in 2014, the silver lining of a season without playoff hockey in the Tri-Cities, and one of the league’s most dangerous and consistent offensive players producing 296 points over his 259 game tenure in Kitchener.

“I’ve had good coaches that have allowed me to continually get better,” says the former GTHL Player of the Year. “The big thing is consistency. You can play well one night but if you don’t play well every night it doesn’t really matter. Our coaches have done a good job of helping us to be consistent and that’s why we’re in this position.”

The Rangers stood atop the Midwest for the majority of 2017-18 clinching their first division title since 2008, the last year the club hoisted the Wayne Gretzky Trophy and Robertson Cup.

“It’s definitely been a long time coming,” said Bunnaman. “We made the playoffs every year (since 2014) but haven’t made it this far. Now that I’m an older guy in this league and a leader on this team, it’s kind of cool being here and having more of an impact on the game.”

Bunnaman was named the Rangers’ 53rd captain in franchise history in September, a long road since being the club’s second pick, 31st overall, in the 2014 OHL Priority Selection.  He’s now played 265 games in Kitchener contributing 155 points following his days as a Guelph Jr. Gryphon.

“My first year I was just thinking about making the team and playing some minutes,” he laughs. “But my second year we had a really good team but couldn’t get past London. Now this year, all season, we’ve really felt like we could do something special.”

Mascherin also marvels at how junior hockey time flies by.

“Older guys my first year said ‘boys enjoy it, you don’t know how quick it goes by’ and you kind of shrug it off when you’re 16, and now that it’s our last year and we’ve gone through the process it’s really exciting.”

While the pair have enjoyed sharing milestones like the same OHL Draft then NHL Draft experience (Mascherin second round to the Florida Panthers and Bunnaman fourth round to the Philadelphia Flyers in 2016), they can’t help but bond over the fact that they’re the club’s elder statesmen.

“We joke around, like on the bus ride here (to Sault Ste. Marie) we said ‘we’ve been in Kitchener too long’ joking with the guys how it’s our fourth year and how nobody else has been through what we have,” Mascherin says with a laugh. “We love it. It’s a pleasure to play at The Aud. I think it’s the best rink in the league and it would be nice to win there for our fans.”

The history of the 2008 championship along with past winners like the 2003 Memorial Cup season isn’t lost on the veterans who want nothing more than to add another banner for one of the CHL’s most storied franchises.

“Dan (Lebold) has told us some stories about past Memorial Cup teams,” Bunnaman said. “Getting to the Conference Final you start itching for it getting closer and closer to our goal.”

And they can certainly feel the support of the community rallying behind them.

“It didn’t really settle in until we got past Sarnia,” Mascherin said. “Once we beat them, there’s definitely been a lot of excitement in Kitchener and we’re looking forward to going back home to play in front of them.”

The journey isn’t over yet but regardless the outcome the two have cemented personal legacies in Kitchener that will not be forgotten, nor will they forget the memories of their time spent in blue.

“Kitchener has been unreal to me,” Bunnaman reflects. “I can’t say enough. Through all the coaches I’ve had, the training staff, they all treated me so well. Every day has been something special. All the history here, I can’t say enough about what it means to be a Ranger.”

“It’s been a good run for four years,” adds Mascherin. “I’m excited for what the rest of the season has in store here in Kitchener. It’s been a pleasure to play here.”