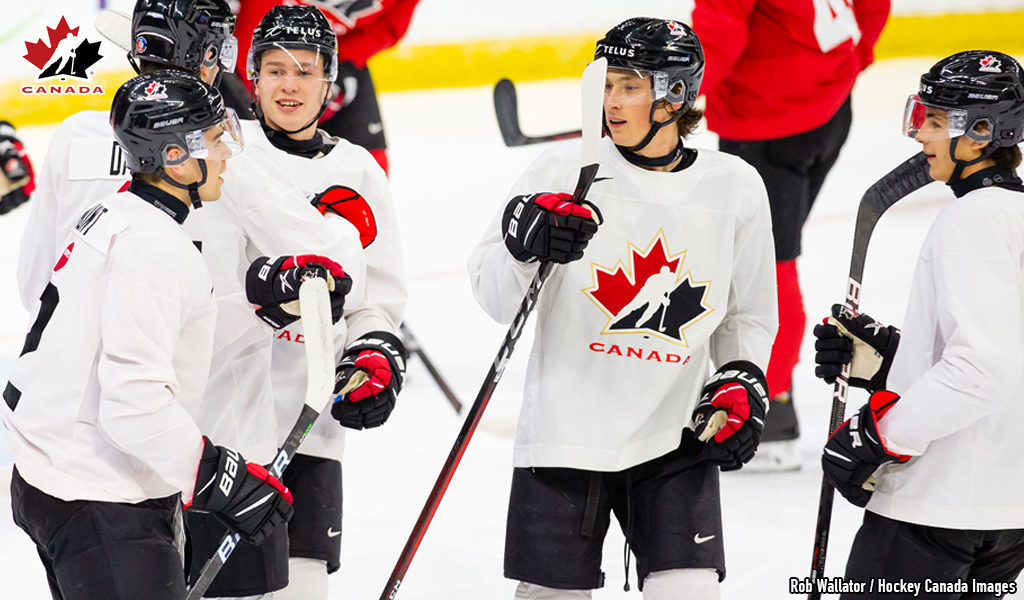 Jamieson Rees (Sarnia Sting) scored a pair of goals and Jack Quinn (Ottawa 67’s) scored a goal and an assist to put Team Red within one in the final frame, but empty net goals from Graeme Clarke (Ottawa 67’s) and Connor Zary (Kamloops Blazers) sealed the deal.

Seth Jarvis (Portland Winterhawks) also had a hand in the win with a goal.

Brett Brochu (London Knights) solved 27 of the 30 shots he faced in net for Team White.

OHL forwards Tyson Foerster (Barrie Colts) and Cole Schwindt (Mississauga Steelheads) were both out of action, each listed as day-to-day with upper body injuries.

Both teams will next take to the ice on Tuesday at 12:00pm ET.

NOV. 21 INTRASQUAD GAME – WHITE 4, RED 2
Philip Tomasino (Oshawa Generals) scored a goal and an assist while Connor McMichael (London Knights) also found the back of the net to lead Team White to a 4-2 win in intrasquad action in Red Deer on Saturday.

Following several days of practice and off-ice activity, players divided into teams for organized play to kick-off the weekend as Team White outshot Team Red 27-25 and went 2-for-3 on the power play.

Brett Brochu (London Knights) contributed to the win in goal, stopping 12 of the 14 shots he faced. Other Team White markers came off the sticks of Gage Goncalves (Everett Silvertips) and Dylan Cozens (Lethbridge Hurricanes), who both scored power play goals.

The scrimmage came after Hockey Canada issued a statement announcing a non-core member of the National Junior Team staff had tested positive for COVID-19. The staff member who tested positive, along with a number of colleagues who had been in close contact were placed in quarantine at the team hotel in Red Deer. Hockey Canada continues to follow all protocols as directed by Alberta Health Services and will monitor the situation closely with the health and well-being of all players and staff at the forefront.

The two squads hit the ice for another intrasquad matchup on Sunday at 8:00pm ET.