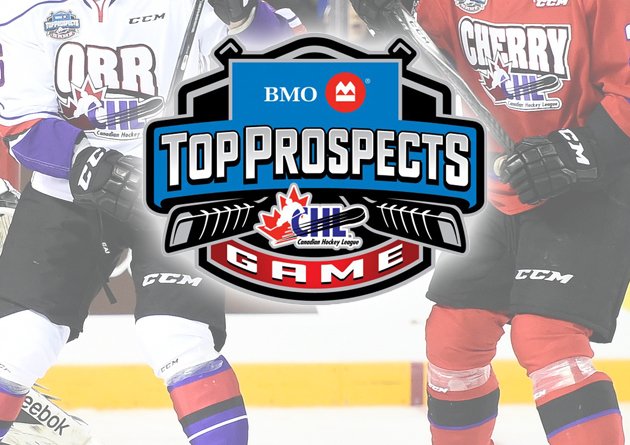 Toronto, ON – The Canadian Hockey League in association with the host Vancouver Giants Hockey Club, and title partner BMO Financial Group, today announced the 40 players that will compete in the 2016 BMO CHL/NHL Top Prospects Game in Vancouver, BC, on Thursday January 28, 2016.

The 40 CHL players competing in the game were chosen by all 30 NHL clubs and divided into teams by NHL Central Scouting.  This season’s event marks the 21st annual showcase of the CHL’s top-40 NHL Draft eligible players featuring talent from the Western Hockey League, Ontario Hockey League, and Quebec Major Junior Hockey League competing before hundreds of NHL scouts in attendance.

“The BMO CHL/NHL Top Prospects Game is one of the highlights of the hockey season,” said CHL President David Branch. “Since 1996 the CHL’s top prospects have showcased their skills in this event providing NHL scouts, General Managers, and fans the opportunity to catch the next wave of NHL talent which in recent years has featured first overall picks Connor McDavid, Aaron Ekblad, Nathan MacKinnon, and Ryan Nugent-Hopkins. We look forward to January 28 with coaches Don Cherry and Bobby Orr, and 40 of the top CHL players eligible for the 2016 NHL Draft competing before the passionate hockey fans in Vancouver and to CHL fans across Canada watching live on Sportsnet and TVA Sports.”

“We are thrilled for the up-and-coming talent chosen for this year’s BMO CHL/NHL Top Prospects Game,” said Michael Bonner, Senior Vice President, BC and Yukon Division, BMO Bank of Montreal. “As the Official Bank of the CHL, we’re proud to sponsor an event that allows Canadians to watch some of the top young athletes across the country, and we’re excited to bring them to Vancouver later this month.”

25 of the CHL’s 60 member clubs are represented on the rosters including nine OHL teams.  The 40 competing players include 20 from the OHL, 12 from the WHL, and eight from the QMJHL.  The Steelheads lead the CHL with four players named to rosters, while the Knights, Sault Ste. Marie Greyhounds, and Windsor Spitfires each have three players competing.

“The BMO CHL/NHL Top Prospects Game provides a unique opportunity for NHL scouts and General Managers to evaluate top CHL talent for the 2016 NHL Draft in a best-on-best competition,” said NHL Central Scouting Director Dan Marr. “The game is also a unique opportunity for the players to take advantage of the spotlight in what is consistently an exciting and highly competitive showcase.”

The 2016 BMO CHL/NHL Top Prospects Game is proudly supported by title partner BMO Bank of Montreal, and CHL associate sponsors Cooper Tire, autoTRADER.ca and Sherwin-Williams.  The game will be broadcast live on Sportsnet and TVA Sports.