Bolland a Knight to remember 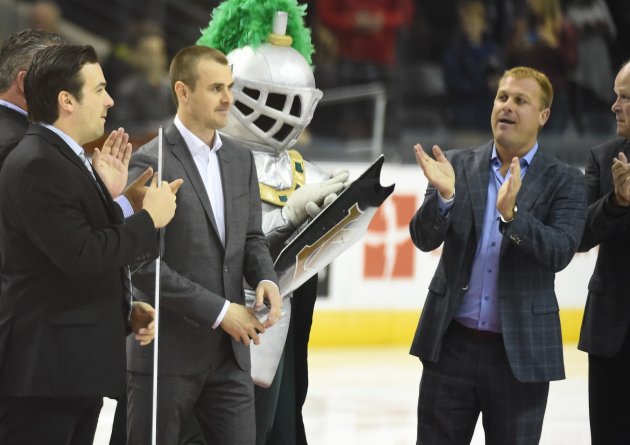 An integral part of what some consider one of the most dominant teams in Ontario Hockey League history, David Bolland has carved out an accomplished hockey career, one that includes a MasterCard Memorial Cup, World Junior gold, and two Stanley Cup titles along with a wealth of friendships and memories along the way.

On Wednesday night, the London Knights recognized Bolland as one of the franchise’s finest, retiring his number 91 to the highest reaches of Budweiser Gardens. Bolland’s banner now holds a place among other Knights greats such as former teammate and friend Corey Perry (94), Rob Ramage (5), Dino Ciccarelli (8), Darryl Sittler (9), Brendan Shanahan (19), Brad Marsh (22) and Rick Nash (61).

“It was awesome and cool to see number 91 go up there,” Bolland told Ryan Pyette of the London Free Press. “I thank the Hunters for everything. It’s family here and those four years in London, we had so much fun. Even when you go to the NHL, you still miss your junior days.”

The now Florida Panthers centreman was a part of the London Knights club that set an Ontario Hockey League record in 2004-05 by winning 59 games in the regular season. Along with teammates in Corey Perry, Dylan Hunter, Rob Schremp, Danny Syvret and a strong cast of others, Bolland and the 2005 Knights etched another milestone in the OHL record book by going undefeated over a stretch of 31 games and later captured the franchise’s first and only Memorial Cup on home ice.

A year later in 2005-06, Bolland’s dominant campaign saw him receive the OHL’s Jim Mahon Memorial Trophy awarded to the league’s top scoring right-winger. He racked up 57 goals, 73 assists and 130 points in 59 games.

Bolland is perhaps best known in his NHL career for his big goal with the Chicago Blackhawks in the final minute of game six of the 2013 Stanley Cup Finals.  The defining goal gave the Blackhawks their second Stanley Cup title in four years.

The knighting ceremony of a franchise great proved inspiring to the young Knights on the ice, who in front of 8,728 strong, did Bolland proud. Max Domi’s shootout winner propelled the Knights to a 4-3 victory as they handed the Erie Otters their first loss of the season. 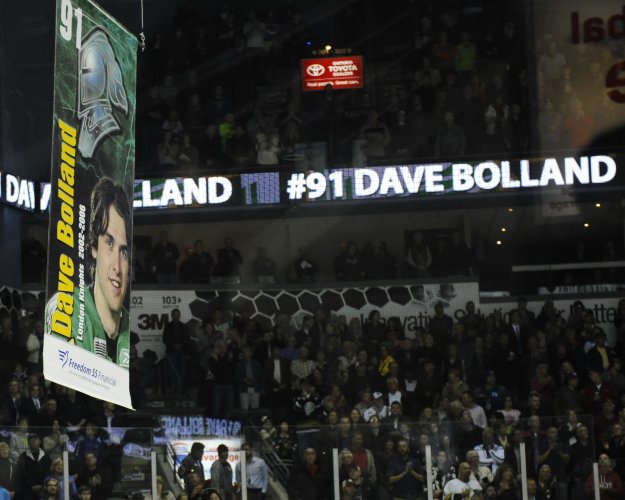 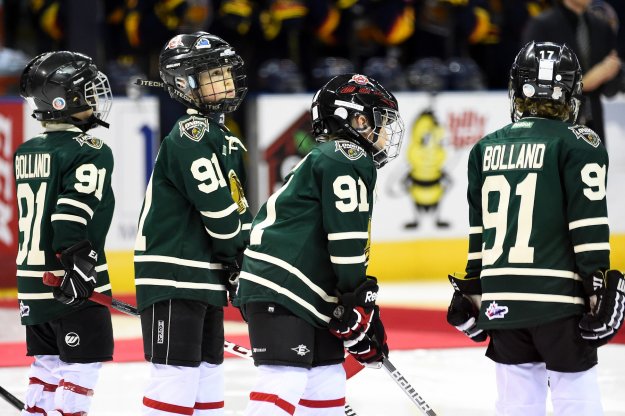