Boqvist and Dhillon named CHL Performers of the Week 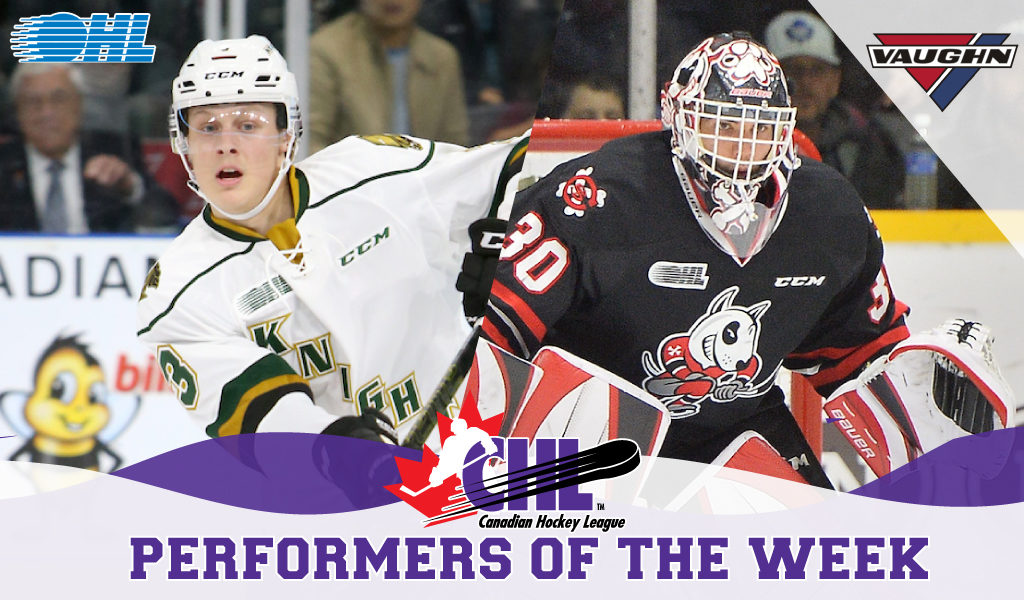 Toronto, ON – The Canadian Hockey League today announced that defenceman Adam Boqvist of the London Knights is the CHL Player of the Week for the second week of playoff action ending March 31 with six goals in two games.

The Knights blue-liner helped cap a four-game sweep of the eighth-seed Windsor Spitfires in first round OHL Western Conference action thanks to an incredible four-goal effort in Game 3 that saw him cash in three times on the power play before adding the eventual game winner late in the final frame of the 6-3 victory en route to first-star recognition. The Chicago Blackhawks first-round pick then added two more tallies in a 5-2 win in Game 4 for his second-straight first-star honour to help punch London’s ticket to the second round and a date with the Guelph Storm beginning Friday night. Through four playoff games, Boqvist has collected seven points, including an OHL-leading six goals.

Boqvist, 20, is in his first season with the Knights, coming off a campaign in which he registered 20 goals and 40 assists for 60 points in just 54 games to lead all London defencemen and finish third in team scoring. Earlier this year, Boqvist competed in five games with his native Sweden at the 2019 IIHF World Junior Hockey Championship, where he notched one goal and three assists for four points.

Also considered for the award this week was 2019 NHL Draft hopeful and Vancouver Giants blue-liner Bowen Byram, who tallied two goals and four assists for six points in four games to lead his squad to a six-game defeat of the Seattle Thunderbirds, as well as 2019 Jean Beliveau Trophy winner Peter Abbandonato, who notched eight assists and a plus-seven rating over three games to power the Rouyn-Noranda Huskies to a six-game series win over the Shawinigan Cataractes.

Toronto, ON – The Canadian Hockey League today announced that Stephen Dhillon of the Niagara IceDogs is the Vaughn CHL Goaltender of the Week for the second week of playoff action ending March 31 with a 3-0 record, including two shutouts, a goals-against average of 1.00, and save percentage of .959.

Dhillon claims the honour for the third time this year after turning aside 70 shots over three contests versus the North Bay Battalion to help win the first round OHL Eastern Conference series in five games. His week began with a 6-0 road victory in which he stopped 20 shots and was named the game’s third star. He then chalked up his second-straight road win in a 5-3 final where he made 23 saves. Dhillon then wrapped up the series Friday with his third shutout in five games as he turned aside 27 shots in the 4-0 final earning third star recognition and setting up a second round series versus the Oshawa Generals.

Also considered for the award this week was Ottawa Senators prospect Kevin Mandolese of the Cape Breton Screaming Eagles, who won all four of his appearances, in which he posted a 1.92 goals-against average and .935 save percentage with one shutout to push his club to a six-game series win over the Charlottetown Islanders. In the WHL, Everett Silvertips netminder Dustin Wolf guided his club to a five-game defeat of the Tri-City Americans, where his past three appearances saw him come away with two wins, including one shutout, for a goals-against average of 1.34 and save percentage of .945.