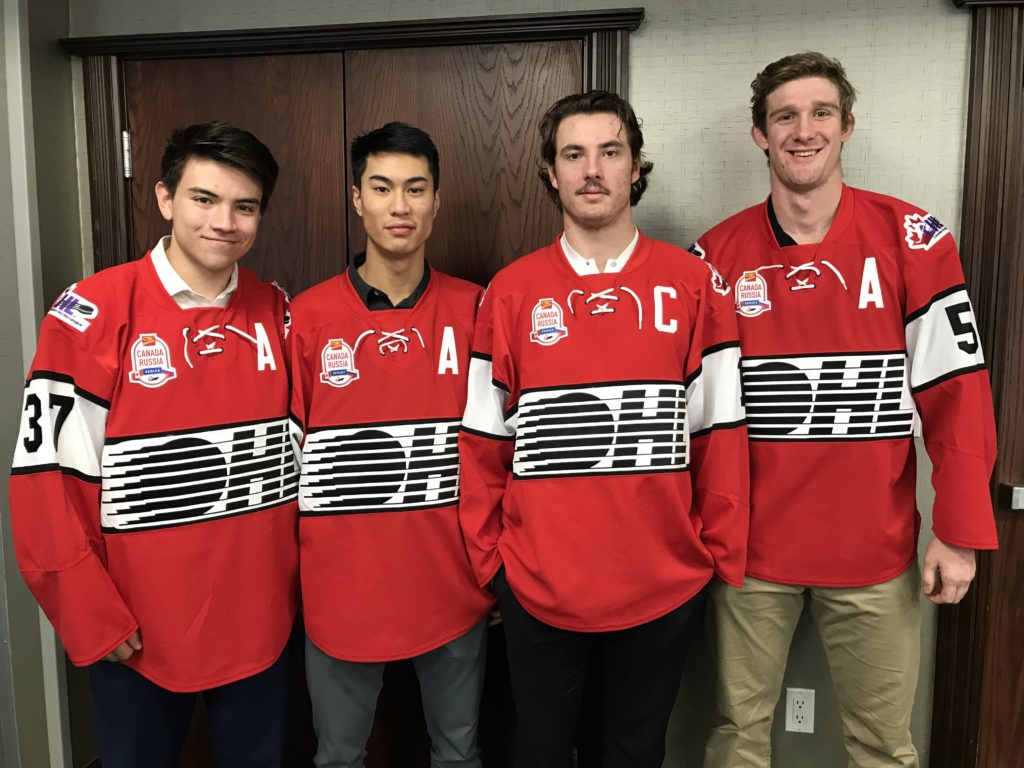 Sudbury, ON – The Ontario Hockey League, in association with the Canadian Hockey League, today announced that Tampa Bay Lightning prospect Boris Katchouk of the Sault Ste. Marie Greyhounds will serve as Team OHL captain for Game 4 of the 2017 CIBC Canada Russia Series Monday night in Sudbury.

In addition, the OHL announced that Florida Panthers prospect Jonathan Ang of the Peterborough Petes will serve as an alternate captain along with Toronto Maple Leafs prospect Keaton Middleton of the Saginaw Spirit and Vegas Golden Knights prospect Nick Suzuki of the Owen Sound Attack.

Katchouk is currently seventh in OHL scoring with 29 points in 20 games and ranks second in goals with 18.  The 19-year-old from Waterloo attended Canada’s National Junior Team Summer Showcase and will compete in his third game tonight for Team OHL in two seasons.  He scored a goal last year in Hamilton as part of a 5-2 OHL victory, and also competed in Game 3 of this year’s series on Thursday night in Owen Sound.  Katchouk was a second round pick of the Lightning in the 2016 NHL Draft along with Taylor Raddysh who served as Team OHL’s Game 3 captain.

Ang currently leads the Petes in scoring with 30 points including 12 goals and 18 assists over 21 contests. The 19-year-old centreman from Markham attended Canada’s National Junior Team Summer Showcase and was a fourth round pick of the Panthers in the 2016 NHL Draft.  He will play his second game with Team OHL in CIBC Canada Russia Series action after competing on Thursday in Owen Sound.

The captain of the Saginaw Spirit, the 6-foot-6, 240Ib. Middleton has two goals, seven assists and nine points over 14 games in this, his fourth OHL season. The 19-year-old defenceman from Stratford was a fourth round pick of the Toronto Maple Leafs in the 2016 NHL Draft.  He will be representing Team OHL for the first time tonight.

Suzuki suits up for his second game as a member of Team OHL after representing the Attack on home ice in Game 3 of the series on Thursday.  Currently tied for third in OHL scoring, the 18-year-old from London has 10 goals and 21 assists for 31 points in 18 games.  He attended Canada’s National Junior Team Summer Showcase after being selected in the first round by the Golden Knights in the 2017 NHL Draft.

At the midway mark of the 2017 CIBC Canada Russia Series, Team Russia holds a 6-3 lead in points after splitting games in the Western Hockey League and following a 5-2 victory over Team OHL on Thursday night in Owen Sound.  Team OHL carries an all-time record of 23-5-1 in Canada Russia Series action.

All games of the 2017 CIBC Canada Russia Series will be available online through NeuLion’s CHL streaming platform at http://chl.neulion.com/chl/.

All games of the 2017 CIBC Canada Russia Series will also be broadcast on the NHL Network U.S the following day at 10:00 am Eastern.

The 2017 CIBC Canada Russia Series is supported by title sponsor CIBC, the Official Bank of the CHL, along with associate sponsors Cooper Tires and Sherwin-Williams.