Bouchard and Keyser named CHL Performers of the Week 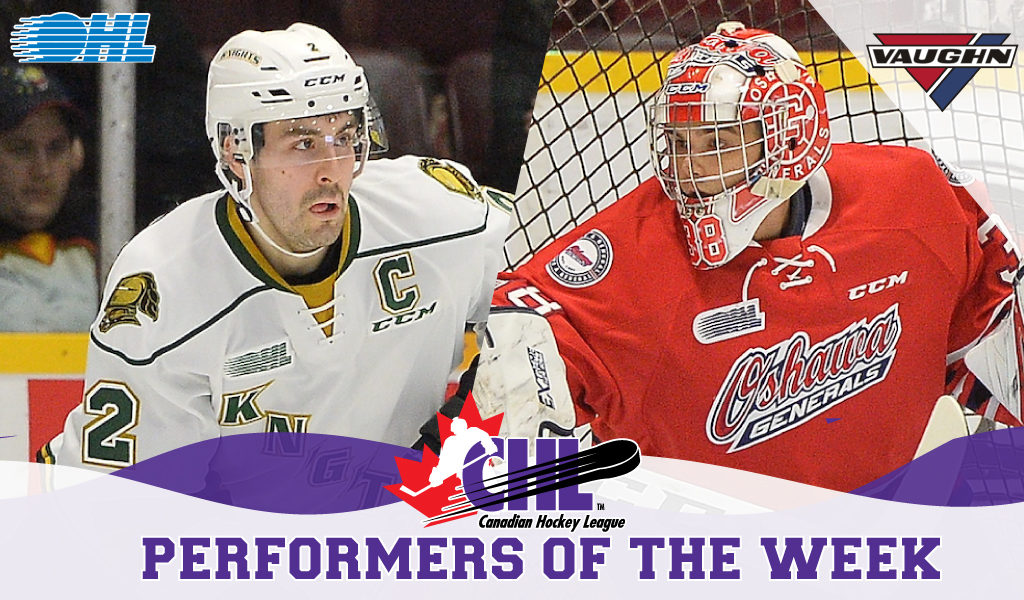 Toronto, ON – The Canadian Hockey League today announced that defenceman Evan Bouchard of the London Knights is the CHL Player of the Week for the first week of playoff action ending March 24 with seven points in two games including two goals and five assists with a plus-minus rating of plus-3.

The Knights captain helped his squad climb to a 2-0 series advantage over the eighth-seed Windsor Spitfires beginning with a four-point effort as first star of Game 1 on Friday that saw him notch two goals and two assists, including a helper on teammate Alec Regula’s game-winning goal in the 4-3 decision. The Edmonton Oilers first round draft pick then added another three assists and earned third star honours in a 5-0 victory in Game 2 and sits first in OHL playoff scoring. Game 3 against the Spitfires goes Tuesday in Windsor.

Bouchard, 19, is in his fourth season with the Knights and is coming off a campaign in which he recorded 16 goals and 37 assists for 53 points in just 45 games. The Oakville, Ont., native also appeared in seven games with the Oilers earlier this season and was part of Team Canada at the 2019 IIHF World Junior Hockey Championship. In all, Bouchard has registered 201 points in 223 career OHL regular-season contests.

Also considered for the award this week was Everett Silvertips blue-liner Jake Christiansen, who tallied one goal and four assists for five points in two playoff games against the Tri-City Americans, as well as Charlottetown Islanders left-wing Daniel Hardie, who registered three goals and one assist for four points in two contests versus the Cape Breton Screaming Eagles.

Toronto, ON – The Canadian Hockey League today announced that Kyle Keyser of the Oshawa Generals is the Vaughn CHL Goaltender of the Week for the first week of playoff action ending March 24 with a 2-0 record, a goals-against average of 1.00, and save percentage of .967.

Keyser claims the honour for the first time this year after turning aside 58 shots over two playoff games versus the Peterborough Petes to help his team find the win column in both contests. In Friday’s series opener, Keyser stopped all 33 shots to record his first career OHL playoff shutout and received first star honours in a 7-0 final. The Boston Bruins prospect then followed up that performance in Game 2 on Sunday when he surrendered just two goals on 27 shots en route to an 8-2 victory and a 2-0 series lead. The series resumes Tuesday in Peterborough.

The 20-year-old Keyser has completed four seasons in the OHL. Through 47 games this year, the Floridian posted a 32-8-3-0 record with a 2.75 goals-against average and .915 save percentage.

Also considered for the award this week was Colten Ellis of the Rimouski Oceanic, who won both of his appearances versus the Chicoutimi Sagueneens, including a four-overtime marathon in Game 2 on Saturday in which he turned aside 53 shots in an eventual 3-2 win. Ellis holds a .944 save rate across the two games. In the WHL, Carl Tetachuk of the Lethbridge Hurricanes helped carry his squad to a 2-0 series edge over the Calgary Hitmen, coming away with a goals-against average of 1.43 and a save percentage of .955 in the pair of victories.